Hello, I am mental

When I first saw this woman's face on the "MISSING" posters her terrified family and fiance had tacked to trees all around Duluth, Georgia, I thought to myself, "Wow, she doesn't look completely right." Hey, guess I win the prize!

This is Jennifer Wilbanks: 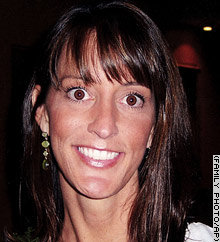 Jennifer got cold feet about her upcoming wedding. Instead of calling it off, postponing it, or going for counseling, Jennifer did what any normal, 32-year-old, Muppet-ish looking American woman would. She ran away from home. She whacked off her hair and left a huge clump of it a short distance from her Georgia home. And then, she boarded a bus for Las Vegas, so she could have some alone time. She needed to think some things out.

Apparently, she'd seen one too many "what happens in Vegas, stays in Vegas" tv commercials.

You know, when I need time for quiet contemplation, the first place I consider as my Fortress of Solitude is The Strip. 10,000,000 slot machines, screaming drunks, and big-budget shows - it's all white noise, right? Maybe she was making a pilgrimage to the Oracle of Vegas, Celine Dion. Who the F knows? (Suddenly, and uncharitably, I have this image of the “Zoltar Speaks” machine from the movie "Big". Except that Zoltar has Celine Dion’s head, resplendent in it’s terrifyingly over the top wedding tiara/crown/trainwreck. Rene stands next to the machine. “Bonjour, mes amis! Put your quarter in zee slot an’ Celine, she will anzer your kes-ti-ons and divine your fee-yoo-cher. S’il vous plait!”)

Meanwhile, her family is bereft. They think she has been abducted. Her fiance takes a polygraph. Is he another Scott Peterson?!? People are mobilized. There is much sobbing and candle-lighting. Eventually, a search in Georgia is called off. Jennifer's Saturday wedding is being refocused as a prayer vigil.

Our girl has reboarded a bus and headed to Albuquerque, where she calls her traumatized fiance from a pay phone. She relates a story of abduction by two men in a blue van who release her, miraculously, in New Mexico. The Albuquerque police race to retrieve her from a 7-11. Faced with genuinely concerned law enforcement personnel and a mounting stack of inconsistencies, Jennifer's lies collapse in in a handful of hours.

Cold feet. She puts her family through a week of hell over cold feet.

The family had made a joyful statement to the press as soon as her fiance let them know she'd been released by "her captors." A half an hour later, they were shoo'ing the press off their lawn and closing the blinds. Jennifer's fiance left the house a few minutes later, stone-faced and silent.

Nothing better than finding out your fiancee would rather have her family think she's dead than marry you.

Having all of America find that out, too. On Fox News.

Not surprisingly, he did not fly down to New Mexico to be reunited with her.

Dude, they should let you keep all the gifts.
Posted by Merujo at 1:17 PM

Great analysis of the coverage in Howard Kurtz's column today. Best quote for me was: "MSNBC's Keith Olbermann was one of the few anchors to wonder if Wilbanks fled: 'I don't mean to judge a book by its cover, but those photos of this woman -- I don't know how recent they are. There`s just a feeling about those shots, with her eyes sort of bugging out, that you look at that and say, Is she going to run or do something?'"

Excellent! I'm glad to know it's not just me (and Ro) that think she looks fairly mental. Someday, maybe I'll have to write about Craaaaazy Judy, the whack-job girl with the goo-goo-googly eyes... (but all the names will be changed to protect the innocent and unwell...)

Yep! You win the prize on guessing this one correctly... too bad that wasn't a cash prize - sorry.

My first thought at seeing her picture was - Wow! What a "deer in the headlights" look she has about her. (I thought that expression was traditionally reserved for the man at the wedding.)

Honestly? I think all this Reality TV is giving the average person a sense of entitlement... heck, shouldn't everyone be on television now? Nevermind how much it's going to cost the taxpayers.

What constitutes "normal" behavior in our current society? Time was you would have rathered "died" than made the 5 o'clock News - now it's one big festive party with endless amounts of attention and book offers.

For me, the worst punchline to this whole mess was when I watched on the news that her "fiance" wants her back...

Oh please, somebody call Dr. Phil and get these people the help they need.