Has anyone actually seen...

Cherie Blair and Rachel Dratch together at the same time?? 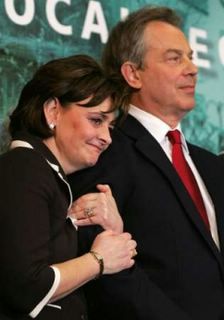 Hmmm... I sense a conspiracy here! (Of course, I also used to suggest that Janet and Michael Jackson were the same person. And then, as the surgeries progressed, that changed to LaToya and Michael...) 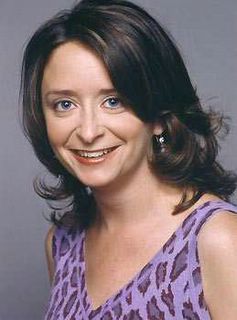 I can't picture Cherie Blair in lavander leopardskin, though...

At the very least, I hope SNL takes advantage of the remarkable resemblance and does something wonderfully tasteless with it. My favorite Rachel Dratch SNL moment? When she portrays the drooling mutant, potato-sack-garbed love child of Angelina Jolie and her freakazoid brother James. It was horrifying and hilarious all at once. Good goin' guys. When SNL is on, it's really on. And when it's not, it's a trainwreck so bad even rotten.com wouldn't feature it.
Posted by Merujo at 4:09 PM

That is a scary resemblence! She looked so cheery when standing behind her husband when he won his constituency. If I was her I'd have looked like I was about to fall asleep - it was after all gone 2 am!

Sorry to hear about your day from hell earlier on!

I have this image of the news footage to go along with that photo, where her eyes close and she slowly slides to the floor, snoring, as Tony continues to wave to the crowd. :-)

Today's been much better that yesterday. Had lunch with a friend. Laughed a lot - which is a Good Thing.

Found your blog after you posted on Rosies. I bookmarked you and will keep coming back. take care! :)

Again, you have correctly identified alien cloning foibles... how your keen observations skills must anger them... I still say they have sent the wee little mice to spy on you...