So, last night, in the pouring down rain, I decided to stop by Beyond Comics up at Lakeforest Mall in lovely Gaithersburg, Maryland to procure a copy of Javier's brand spankin' new comic book, The Middleman. Having not purchased a comic book since high school, this was a big deal, you see. How often does one get to buy a comic book written by someone you harrass through friendly, but rambling comments on his blog???

The folks at Beyond Comics were very friendly and helpful, and I was more than happy to give them my $3.10 for this fine publication. Upon leaving, I realized that my new purchase, protected only by a thin paper bag, was going get completely soaked en route to the car. So, smart chiquita that I am, I tucked the comic under my shirt and headed for the car. 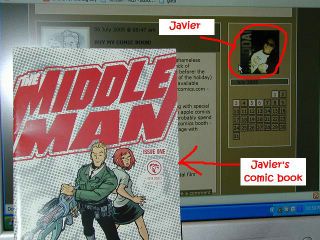 Unfortunately for me, two of the mall security guards saw me tuck the bag under my shirt, and they decided that I must have been smuggling stolen goods out of their territory. They stopped me, made me pull the comic out of shirt in the pissing down rain, and forced me to scramble to produce a receipt. Only then, satisfied that I wasn't a shoplifter, did these guys let me go with the obnoxious admonition that I not engage in "suspicious stuff" anymore.

I offered a colorful thought in return, but was ignored by the studly rent-a-cops returning to stop other rotund comic book mules. So watch out, Gaithersburg! If you see a large woman in baggy clothes shuffling toward you in a mall parking lot, BEWARE! I may be hiding suspicious reading material in my clothes!!!

It's a Washington tradition, really. I learned it from Sandy Berger. 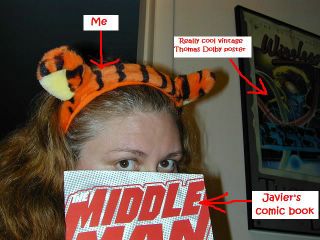 That "Suspicious Stuff" Smuggler, the Middleman, and TMDR.
Posted by Merujo at 4:47 PM

what's awesome is that you have actually gotten to see the final bound version of the book before me - there was a shipping snafu and it hasn't appeared on the stands at my local comic book store.

thanks for all your kind words about the book - and for braving the rain and the 5-0 to read the adventures of the middleman!

Get out! Well, let me tell you, it's got a great design concept - the cover is very clean and sleek - and I *LOVE* the Middleman insignia on the back cover. Most excellent!

Interestingly, on the publishing info at the bottom of the inside cover, it's noted as THE MIDDLE MAN. So, is he the Middleman or the Middle Man? :-)

Always a pleasure to support someone with talent, Javier!!

Good Lord! I swear absolutely nothing comes easy for you, lady!

I am sure they will keep their eyes out for you at that mall.