Stuff I found on a old zip disk #2:
the Siegfried and Roy edition

A few years back, I went to Las Vegas with a delegation of Russki (and other Eurasia-ski) computer guys. We went to walk the exhibit halls at Comdex Fall - then the ultimate IT geek's wet dream trade show. A vapid, obnoxious colleague came with us, and she was dying to see Siegfried and Roy. On a what-the-hell whim, I went with her one evening. I wrote up a bit on our adventures in magic, which a few of y'all have seen before. The days of SARMOTI are now over, and, having found this on that old zip disk, I figured it was time to resurrect my tribute to the patron saints of Vegas. Keep in mind, this was written well before "the little tiger problem."

For those of you unfamiliar with my overpriced night at the Mirage, may I present...


It’s in the morning on the Vegas Strip. Do you know where your money is? 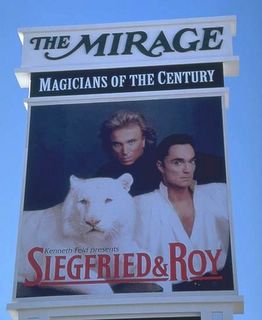 Siegfried and Roy: the before time.
Posted by Merujo at 12:40 AM

Isn't that the best? You should have seen the look on my face when she said it. God, that was a beautiful moment.

Smoke & Mirrors, baby... that review was painful and hilarious at the same time; cranky Italians, giant cod pieces and peeing elephants - what more could you want or need?

Thankfully, "What happens in Vegas, stays in Vegas" ~ LOL!

Well, until someone blogs it, and then it becomes a cautionary tale about what NOT to spend one's money on!