President for Life/Father of the People/Wayne Newton of Central Asia, the right fucking insane Saparmurat Niyazov (aka "Turkmenbashi") has added a new wacky law to the books in Turkmenistan: no lip synching.

Now, I wasn't with him on his whole deal changing the days of the week and the months of the year to his and his mom's names, or that whole banning all textbooks except that piece of craptastic "literature" he wrote, but... god, help me... I think I'm with him on this one. Lip synching does suck. 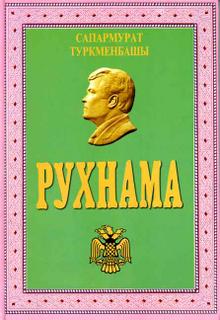 The Rukhnama - the craptastic ramblefest on All Things Turkmen that Turkmenbashi wrote, basically banning everything else from school rooms across the country.
Our current ambassador to Turkmenistan is a friend of mine. When she's no longer the ambassador there, I look forward to asking her just how utterly weird face to face meetings are with him. See, were I in her shoes, I'd be waiting for him to whip out a hand puppet and start taking whispered advice from him. "Theese eez my leetle friend Aibek. Khee helps mee make vital state deeceezhons..." 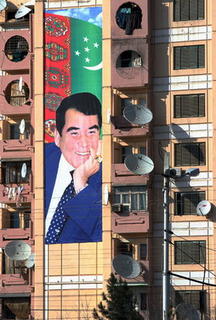 Danke schoen, baby. Danke schoen.
Love that Grecian Formula hair,
Turkmenbashi, hon!
But, seriously, I'm totally with him on stopping Turkmenistan from becoming a "Puttin' on the Hits" empire. It's assinine to codify it, but still, not a bad idea. Don't worry, though. Give Turkmenwacky a couple of days, and he'll come up with something new and totally objectionable, and balance will be restored to the universe.
Posted by Merujo at 2:50 PM