Did you know that Gateway spelled backwards is "Evil Dead"?

Oh, it's true. I'm sure if you reversed those smarmy "Gateway Radio" recordings you're forced to listen to when you call Technical Support, you'd hear "I AM THE DARK PRINCE, LORD LUCIFER, AND I COMMAND YOU TO BUY MORE GATEWAY PRODUCTS!! BOW DOWN BEFORE ME, FOOLS!!!"

Sigh. This a long story of frustration and more frustration. It has sucked up more of my time than I ever imagined it would.

Really, it was nice at the beginning. Those cute cow boxes. The nice friendly Gateway stores. But that was in The Before Time. Before I had to ever call Technical Support. Before one of the technicians called me a "stupid bitch." Yes, it was quite fine back then.

But then, it happened. August 2004. My Gateway desktop, still under warranty, ceased to function. I called Technical Support and began an odyssey that would last three months. 17 different techs diagnosed 17 different problems. I got so many new parts sent out to me that I was basically building myself a new computer. But, in the end, none of it worked. The last straw was the guy who said, "Oh, you need a new motherboard!" (This is in October, mind you.) "Why didn't they figure that out at the beginning! We'll order you a new one, and you'll have it in 3-5 days!"

Five days passed. No motherboard. I call Gateway. "Uhhhh... that's backordered for 30-90 days." After I stop myself from having a stroke, I ask, "Can't you send me a different motherboard? You guys make computers! You cannot seriously tell me you don't have other motherboards?!?!" That was when the tech called me a "stupid bitch."

And that's when my adventures in corporate America got revved up. Having spent years recruiting the CEOs and CIOs of lots o' companies to host international delegations, I am savvier than the average bear when it comes to sussing out the contact information for corporate leaders. I determined what the e-mail addies would be for the Prez, board of directors, and numerous vice-presidents of Gateway and sent them my whole saga, incluing not only the three months of mounting BS from their employees, but the "stupid bitch" comment, and the fact that I'd recommended Gateway to several of my eight siblings. 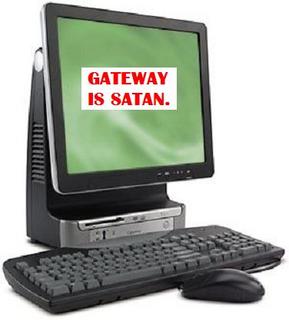 Gateway straight to Hell. Oh yeah!
Next morning, I get a call from some "executive response" wonk named Marvin. Marvin tells me I'm getting a new computer and $75 in Gateway credit. I'm told when to expect it, the whole nine yards. I tell my office I'll need a day off so that I can be home to accept the shipment, which is supposed to come via UPS.

I come home from work one afternoon to discover a (theoretically)$2K computer sitting outside my door in my unsecure apartment building. Anyone could have just strolled off with it. After I start breathing again, I open up the box. Turns out, Gateway has replaced my top-of-the-line desktop with a crappy eMachines number with a pretty facade. Not happy. No sir. Not one bit. This damn thing won't even turn off on its own. It's been a manual shutdown since last November. I called Gateway a zillion times about this, saying, "You know, this can't be good for the machine. It's not healthy." Each call was received with a puzzled, "Gosh, I don't know what the deal is" type of response. Five times I was told someone would be returning my call to determine the problem. No one ever called back.

I tried to reach Marvin, my "executive response" wonk. He never replied to me.

Oh - and that $75 credit? Wanting my business with Gateway over and done, I ordered a Creative Labs MP3 player. (If they'd sold iPods, I would have snarfed one of those babies.) My order failed 5 times over a month period because no one from Gateway ever entered my credit code into their system, so it kept getting tossed as bogus. I was marked in the system as someone who was trying to rip them off. I had to call and get very angry with Marvin to make that purchase happen.

Fast forward to three weeks ago. The Ethernet card dies in my desktop. I decide (with the help of the Comcast folks) that it would be a whole lot easier to take my modem in to Comcast to trade up for one with a USB connection (wise move - my modem was so old, it made the Comcast guy laugh out loud when I handed it over) than it would be to deal with the a-holes at Gateway.

Until the hard drive died.

After several hours on the phone with Gateway, finally a smart person who let me hold the phone up to the chassis of the machine said, "Yep. Dead hard drive."

I got a confirmation e-mail that the hard drive was en route. It gave me a tracking code, but no identifier for the shipping company. The e-mail noted that "if this message does not contain the name of one of our premiere shippers (UPS or FedEx), your product will be shipped by another premiere shipper."

I tried to get information online and over the phone, but Gateway couldn't identify the shipper for me. Lovely. Helps one plan. Especially when one is concerned about possible theft.

Today, I heard the FedEx truck roll up to the building. (It has a distinctive sound, just like the UPS truck does. BTW, the UPS guy in my neighborhood is kinda hot in a Bruce Campbell/early Evil Dead way.) I hear a quick knock on my door and a thump. I go over and, lo and behold, there is a box from Gateway dropped outside my apartment. Again, a valuable item just tossed at the door.

Only this time, the "pilfer-proof" tape on the box has been ripped off and replaced. The address label is torn up, and, when I opened the box, I discovered that the packaging for the hard drive has been raggedly cut open. Clearly, someone in the FedEx system thought I was gettin' an iPod, and boy, that jerk must have been disappointed.

I called Gateway and asked what the hell I should do. Long story short - if I wanted to return it, they would have to take 72 hours to investigate and determine whether or not the item really did arrive "damaged" or I was just lying about it. I said to the guy, "Uh, why would I want to waste my time sending this back to get another one? It's not like I'm coming out ahead in this arrangement. I've already lost all my files. I just want my desktop back." He responded that, frankly, Gateway figured I was trying to pull one over on them. Nice.

I also asked why they used a carrier that didn't require a signature when dropping off valuable equipment. The guy swore that they didn't, and that they never used FedEx to drop off computer stuff. Riiiiight. He told me I must be mistaken. I pointed out that I saw the FedEx truck drive away, and that the box had a FedEx tag on it. He still didn't believe me. I told him my computer had been dropped off by FedEx the same way in November. Again, he told me I must be mistaken. At this point, unable to crawl through the phone and strangle him, I gave up. Serenity now, George. Serenity now!

I then asked if putting in a knowingly manhandled hard drive would void my warranty. The guy didn't really want to go and ask. I used my Dark Side Jedi Mind Trick voice and told him I needed him to do that. NOW. I got 15 more minutes on hold (during which I got to hear that goddamned Norah Jones cover of "More Than This" and Chris Martin warbling "Yellow". Twice. It's the same "Gateway Radio" tape they were playing last August, September, October, and November. Man, do I ever hate the sound of the Gateway girl's voice.) Then, Mr. Tech came back and swore that this whole mess wouldn't void my warranty. I asked for that in writing. He didn't want to give it. I told him he should probably review the file on me, and that I had no problem e-mailing Wayne Inouye again and shaming the Gateway president into giving me decent service.

I must have sounded pretty pissed off by then, for, within five minutes, I had an e-mail saying that putting the potentially damaged hard drive in my computer would not void the warranty.

I still haven't put it in. I just don't want to have to call Gateway tech support again. Evil bastards.

My next computer? Who only knows. My siblings have had problems with Dell. I'll sort it out. But, for now...

Here's some advice for Gateway, if they intend to stay in business:

1. Get competent tech people.
2. Don't treat your customers like morons
3. Don't call your customers nice things like "stupid bitch" - it will come back to haunt you
4. Don't pawn off crappy equipment from your low-cost subsidiary to replace a top-of-the-line machine. Your customer may call in a voodoo priestess to curse you. (Or at least consider it. A lot.)
5. Don't send expensive stuff out for delivery with folks who don't require signatures and who enjoy dropping boxes of sensitive equipment against your door. Seriously. Don't.
6. Don't piss off Merujo. She will find your boss and make y'all very sorry.

So let me guess: you're angling for corporate sponsorship from Gateway?

My father-in-law had some Gateway issues (now he's a Dell man). Luckily, it only required one exorcism...

Yeah, I think my days as a Gateway spokesblogger are pretty much over. Guess this dude(tte) is gonna getta Dell next time...

I may have to douse my desktop with holy water before turning it back on again. Exorcism is the right word, for sure.

I never thought I would meet a person more "cursed" than I...

It is comforting and frightening at the same time. I am SO sorry. What an ugly, ugly mess.

I WILL NEVER EVER BUY A "GATEWAY" COMPUTER!

I hope they heard that all the way to the corporate headquarters! What slime bags.

I wish we could rent some space on the side of a public bus in D.C. and put:

Ha! I think that would hurt business and get their attention quick. Me thinks that A LOT of women would think twice about purchasing from such trashy people.

I hope their stock plummets.