Allison Barber! C'mon down! You're the next contestant on "The Government Weasel is Right!"

Allison Barber, in case you missed recent embarrassing events here in Washington, is the Pentagon's deputy assistant secretary for internal communications - she's the one you saw coaching soldiers in Iraq for their oh-so spontaneous and unscripted (har dee har har) teleconference with the president.

She's taken a drubbing in the liberal press for her coaching duties. And yesterday, she did something to a liberal talk radio host that reeks of revenge. 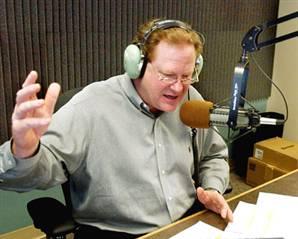 Ed is a liberal radio pundit. He is a large, opinionated man and, honestly, I can barely tell the difference between his voice and that of Rush Limbaugh. (Until the words start spilling forth.)

A month ago, Ed was informed that his syndicated radio show would be featured on the Armed Forces Radio network, providing a liberal voice to the troops, to counter Limbaugh's pill-filtered view of the world. This would be a good thing - it's important for the troops to have access to a full spectrum of opinion - let them retain their freedom of thought and not have their brains completely monopolized by the limited world view of Limbaugh and his self-proclaimed EIB Network. (According to Limbaugh, EIB stands for "Excellence in Broadcasting" - personally, I prefer "Ears I Buggered", but that's just me.)

The start date for Schultz's show on Armed Forces Radio was one day ago, October 17th. But at 7 a.m. yesterday morning, Ed got a phone call from Allison Barber. The same Allison Barber Ed & Co. have been skewering for the past few days. And Allison told Ed the deal was off. No explanations. No nothing. But Schultz was no longer welcome with the Armed Forces Radio family.

Nice one, Madame Barber. Nice one, Department of Defense. Apparently, we know who can't stand the heat. How about getting the hell out of the kitchen, lady.

Look, I'm not here to tell you which direction is correct. However, be you right, left, or firmly stuck with the fencepost up your kazoo, you should support the airing of opposing viewpoints. How can anyone make up their own mind with only half the story on anything? Especially men and women, far from home, isolated in a very hostile place? Allison Barber just denied our troops that important option. No freedom of thought for you, soldier! How about a tasty MRE instead?

The Washington Post reports that, last year, when Congress urged AFR to provide greater political balance in its broadcasting, Rush Limbaugh got pissed off. Said Limbaugh, "I am the political balance." (Suddenly, I am reminded of Sly Stallone howling "I am the law!")

Only in Bizarro World would Rush Limbaugh be considered the political balance of the world. Seriously, folks.

Oh, what's that? Armed Forces Radio has moved its studios to the heart of Bizarro World?

Nothing to see here. Move along, move along...

Someone get me some lithium.
Posted by Merujo at 1:46 PM

As if one person could be the balance... Theoretically it's possible, but Rush certainly isn't that person. ARgh.

Ha-ha, I was going to make an intelligent, political comment on this until I got to the last sentence, at which point I decided to change my comment to let you know that I think Lithium Wetsuit would be a great name for a band.

right, cuz balance is the first word that comes to mind when i think of limbaugh.

although i have to say i'm surprised that they were going to even give an opposing view point to the forces radio, what with bush's attitude of 'if you're not with us you're against us'...

Y'know, bad taste though it is, whenever I read of the antics of your country's carte^H^H^H^H^H government I can't help but be laugh in an incredulous way. That is until I remember how enamoured our government is with yours and wants to lead us down similar tracks.

That, along with the chilling fact that our house of reps and senate are now dominated by the same party* (in the past the senate could be counted on to put the brakes on the more hare-brained policies the house of reps wanted to pass) makes me instead laugh in one of those nervous 'somebody please change the subject' ways...

* - Unfortunately we can only blame our predicament on khaki elections combined with a scared sheep mob mentality rather than dodgy vote recording/counting.

My daughter went to school with a girl named Allison Barber. She loved to brag about what she had and how important her parents were. Her prom dress was really ugly. Wonder if it's the same woman?

Gina, I found this image on someone else's blog. You can check out Allison Barber here. Is she the right age?