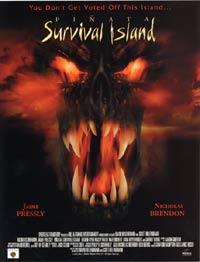 Yeah, sure, you don't get voted off this island.
But, damn! You shouldn't get on AMC, either! 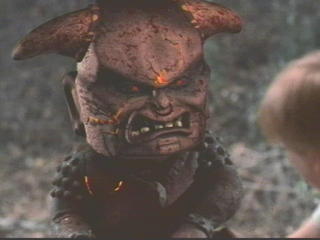 The ancient killer piñata in question.
He looks like he's in intense intestinal distress, doesn't he? Clearly, this is him asking Jaime Pressly for some Imodium. He kills because he's suffering the ill effects of five centuries' steady diet of burritos and Coronas, and no one can understand his crazy ancient killer piñata language.

Poor bastard. I'd kill the drunken island party kids, too.
Posted by Merujo at 1:52 AM

Oy! I feel the same way about Bravo...been thinking about it for a few days, but am now inspired to actually write the post. Gracias!

noooo, not my xander *pout*.

but you know, in the right hands, a killer pinjita...no, not even joss whedon could have saved that one...

and no one can save my spelling apparently...

it's worse than the movie...

Do you think his mother said, "Keep making that face and it will set that way forever?"

It's a painful time of year, when they pull out every lame "horror" show ever made and inflict them all upon us in one vomitus mass.

I have seen this one you are posting about. Ouch. It hurt. Like most of these movies, you are relieved when they finally off the whiney, obnoxious brats.

Okay, sorry, I am getting all worked up here... having "flash backs" and everything. Trauma, pure trauma, but for all the wrong reasons. ACK!

Keep your eye out for those sinister pinatas!