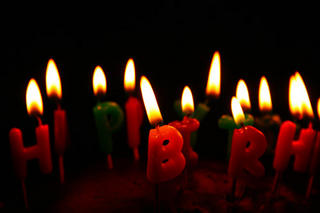 TMDR was my musical icon in college. My friend HoyaMEB first gave me a copy of The Golden Age of Wireless back in high school. She was much, much more musically aware than I was back then. But how she discovered Dolby in Moline, Illinois is beyond me, frankly. We were in a musical black hole, more or less. Local radio sucked like an open chest wound. Guess it must have been MTV. Lord knows, regardless of how she found Dolby, I thank the MEB all the time for hooking me up with the tuneage. 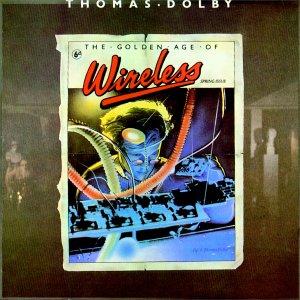 The poster of this album cover hangs right over my shoulder as I type.
My good luck charm and one of my favorite images of the 1980s.


Over the years, my appreciation for both Thomas' music and Thomas the person has grown. While he has not released a large number of recordings, the paucity of actual disc-age is more than made up for with the quality of the tunes. Plus, Thomas has been extremely busy helping to pioneer key technology for music on the web as well as for ringtones. He's not done too badly for himself, indeed. 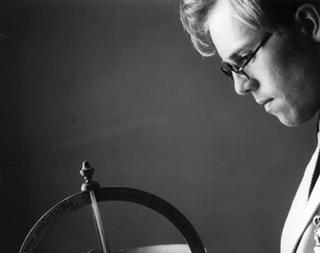 I love these fab old black & white publicity shots. Most excellent.
They make me feel all fangirlish and swoon-y.

The first time I met Thomas was here in Washington, many moons ago now. I still have the answering machine recording that he left me, telling me how to be in touch with him. We arranged to meet up for a cup of coffee/bottle of fizzy water at the bar in his hotel (the swanky Willard right by the White House) and I brought the Sasquatch with me. After all, The Golden Age of Wireless was the soundtrack to the beginning of our friendship.

We had a great time talking - he was in DC for a conference, so his free time was limited, but still we yakked for nearly an hour. He told us some great stories and before we parted ways, I got a photo of the three of us. This was pre-digital camera, and, unfortunately, I'm scannerless right now, otherwise I'd share it with you. (Sasquatch - do you have that photo scanned in anywhere?) Thomas was kind and funny and witty and very generous to share his time with a couple of doofuses he'd only previously encountered through the glory of e-mail.

Since then, I've seen the fabulous Mr. Dolby a couple of times - once at a tech conference, where I had a pile of Russians in tow, and once at his old office in the San Francisco Bay area - actually in the old suburb where my parents lived shortly after WWII. Both times, he greeted me with a big smile, radiating warmth and optimism. This guy is a real gentleman, and I defy you to not feel positive in his presence.

Hell, when my old car died, he even offered to sell me the car he used to haul his windsurfing equipment - great price, easy terms, flexible payment plan. Sure was better than the deal I ended up with at the local Ford dealership. Had I been able to take the time off work to get my carcass out to California to pick it up, he would have had a deal on his hands, no question! I would have driven the DolbyMobile with pride.

Well, hey - I'd be happy with a smokeless little club date, Thomas. I'd just like to hear you perform live, in person, and everything. 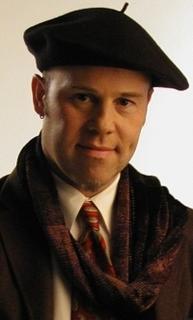 A more recent shot of the Dolby.
And what a handsome man, eh?
Wherever you are and whatever you're doing - happy birthday, TMDR! 10,000 years to Our Fearless Leader!
Posted by Merujo at 1:29 AM

Thomas Dolby has always been one of my favorite recording artists, I remember being so surprised that you were a fan too.

His song "HYPERACTIVE" is pretty much the soundtrack to my life!

Keep bugging him 'cuz we want more Thomas... Every life needs a little Thomas Dolby in it.