Local news in the Washington, DC area seems to follow a set of unpleasant themes:

1. Death by stupid/drunk/distracted driver
2. Death by stray (or not so stray) bullets
3. Death of child at the hands of somebody living with the baby's mother
4. Death by running across a busy street (most of the time, sadly, immigrants from Central America)

Well, you get the point. Death for everyone! A death buffet!

This, of course, is punctuated by drug cases, petty thefts, sexual assaults (most recently in the form of someone stalking women at the Dunn Loring Metro station), and whatever stupid-ass thing Marion Barry is doing this week.

Local Washington news is worsened by our proximity to the Nexus of Evil, aka Our Not-So-Noble Government. Hard to walk around town without finding someone (of either conservative or liberal ilk) upon whom you'd like to rain down blows or a well-aimed stream of spit. Your choice.

But, in recent weeks, we've had a fascinating local story to follow that, amazingly, does not feature any violence or death. It does, however, have a deep, dark streak of corruption running right through it. 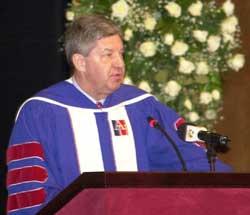 Ladner has been the president of American University here in DC since 1994. His tenure followed that of Joseph Duffey, who only lasted three years. Duffey was preceded by Richard Berendzen, who up and mysteriously resigned in 1991 under a cloud of wild rumors and innuendo. To put it succinctly, the recent presidency of AU has not been exactly stable.

But Benjamin Ladner is special. He brings an aristocratic arrogance to the job that really is beyond the pale. Over his eleven years at AU, Ladner has lead a lavish lifestyle, not only drawing down a significant paycheck - $800K+ per annum in compensation (and a nice $80K+ paycheck for his missus, too, as, I guess, Official First Lady of the University) but also buttering his buns with first class travel, lavish shopping sprees for his wife, and - here's my favorite part - a 13-course engagement feast for his son. 'Cuz, of course, AU owes junior a fanschmabulous send off for married life. Right?

As the Soviet characters in my college Russian language textbook would say: "Vot takoye zapadnoye dekadenstvo!" What incredible Western decadence!

Trustees and others connected to the governance of the university have been calling for Ladner's removal for years. Letters dating back to 1998 note some trustees' displeasure with his opulent lifestyle at the school's expense and an eagerness to see his tenure ended.

The Washington Post has run a series of interesting pieces about Ladner as the saga has unfolded since an anonymous letter spurred the investigation back in March, and the Baltimore Sun recently published this piece that covers not only Ladner's excesses, but also those of other university presidents who fancy themselves royalty. Here's a nice quote from the Sun piece on some of Ladner's more egregious spending issues over the past few years:

"In the case of Ladner, 63, who has led American since 1994 and whose annual compensation totals $800,000, spending under scrutiny includes a $22,345, first-class flight to Nigeria, where the university has an affiliate campus; multiday layovers in top London, Paris and Rome hotels by him and his wife on the way back from university-related trips; a waterfall for his back yard; salaries for a chef, social secretary and chauffeur who investigators say spent much of their time providing personal services unrelated to their formal duties; a $5,274 luncheon that Ladner's wife held for a garden club; wine purchases for personal use that investigators say totalled more than $43,000 over three years, or more than $40 per bottle; $85,000 in food purchases for Ladner and his wife over three years; and family parties including a 13-course, $1,382 engagement dinner for Ladner's son and his fiancee and a birthday party for Ladner that, according to The Washington Post, featured pan-seared foie gras, BeauSoleil oyster, sabayon and caviar, and white truffle risotto. All this at a school with a relatively small endowment where the operating budget is paid for almost entirely by tuition."

Because everyone should be able to charge their employers for a waterfall. Ummm, yeah...

Ladner's extravagant spending habits have been under investigation for some time now, and his small foundation of support began to crumble in earnest over the past month. Fascinating to me was an interview he willing gave to editors at the Washington Post last month, wherein he swore up and down that he had no idea how much money he really made and that he'd never asked for more compensation. Within days, the Post was handed documentation where Ladner specifically asked the school for an additional $5M in compensation in order to support his "current living level" in retirement.

Finally, at the beginning of October, Ladner's executive assistant gave him up, saying he made a point of livin' large and not keeping his business and private expenses separate. Oops. Campus uproar and continued humiliation for the university in the local and national press made the inevitable an immediate issue: Ladner had to go.

And so, the trustees of American University have handed Ladner his walking papers. There's at least $115K that they state he needs to reimburse the university and more than $300K in income he needs to declare to the IRS. Of course, he'll still likely walk away with more than $1M in severance, but the university should just mutter "good riddance" and be done with him. It's an ugly chapter in the school's recent checkered history of leadership. AU is a good school. But it needs to get its house in order.

For the record, AU, in the form of WAMU has been my only employer this summer - three paychecks for three public radio commentaries.

Oh, and my third commentary will be on the air this Friday. Drop by WAMU and hear what will possibly be my last Washington radio hurrah.

I can say that I assisted in funding Ladner's lavish lifestyle throughout my BA and MS (7 years!)at American. Needless to say, I'm pissed. Wish the alumni could do a class action or something.

One thing the BaltSun didn't expose - my friend (who played violin at his lavish parties, for free mind you, as he was an AU student and orchestra first chair) said that Ladner had every light switch lowered 4 inches throughout his AU mansion on Rockwood Parkway. Hard to believe, but true. The waterfall scandal happened when I was living on campus. It blew over after a week or so of outrage. My friend also confirmed the menus of the functions. The musicians were allowed to eat - in the kitchen only. I remember he came back to the dorm with a couple bottles of nice wine, stashed in his bulging pockets! Little did we know that we paid for that wine, so it was entitled to us anyway...

Now, correct me if I'm wrong, AU's affiliation with WAMU is through governance only, not with moolah. When WAMU lost its chief, Ladner briefly stepped in. Universities have been dropping public radio stations because they are too expensive to keep up, but too valuable to drop completely because of the free advertisement, i.e. call letters (WAMericanUniversity), station identification "live from American University...", etc. So I guess there's consolation that he didn't ripoff our favorite radio station...