When I lived in the UK, I always thought about going to Rolls-Royce or Bentley dealer and asking for a test drive. After all, I was 21 (well, half-way through my time there), I had an international drivers license and a clean record. I thought it would have been a hoot to take a spin around central London in a damn nice car. Of course, they probably check your credit before you do something like that, and having a bank account balance of $0 would probably put the big kibosh on youthful stupidity.

Now I'm much older and, through the wonders of unemployment, I still have a bank balance of $0. And frankly, considering the cost of car insurance in the DC area, the thought of a Rolls-Royce test drive holds less intrigue. (Also, I'm periodically cut off in Bethesda traffic by the local horsey Potomac gentry in their own Rolls and Bentleys, and I don't want to be mistaken for one of the wealthy weasels driving a $100K boat down the center line on Woodmont Avenue.)

Now my little fantasies have shifted, and I dream of owning a house. Folks who know me well know my dream house is just a simple, modest Craftsman bungalow. Of course, a real-deal Craftsman bungalow goes for a small fortune here in the DC area. Wait. It's not a small fortune. Just a fortune, plain and simple. I don't even go to open houses for fear of deep depression setting in. Better to just stay here at Chez Merde and not see how the other half lives (in mortgaged debt.) 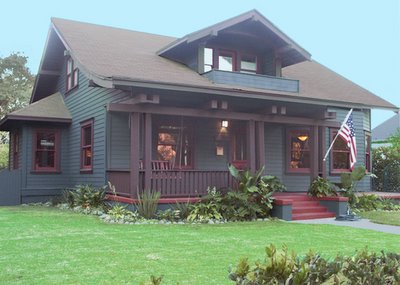 My dream house. (Sigh.)
So, if I'm going to visit an open house, why not just go whole hog and visit a property so far out of my league I can't possibly get bummed out about it? I'm going out to Los Angeles in a few weeks for a quick trip, and this place is up on the block. It's the former home of MTV's Newlyweds, Jessica and Nick, soon to be D-I-V-O-R-C-E'ed. Now, wouldn't that be a fun stop? 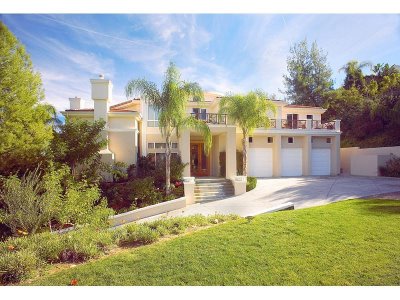 Come to think of it, it would be kind of depressing to pay a visit there. Not from the "I will never be able to afford this sort of celebrity debauchery" standpoint, but from these aspects: 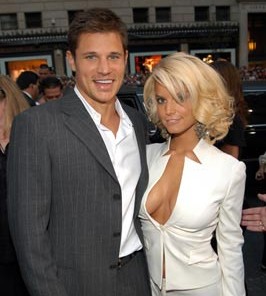 Nick, Jessica, and Jessica's boobs.
2. One of them was the "Chicken of the Sea" chick, for the love of God. 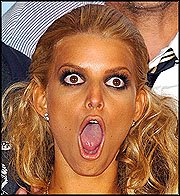 4. This couple was rich as Croesus, yet their "screening room" still looks like a Trading Spaces two-day crap slap. 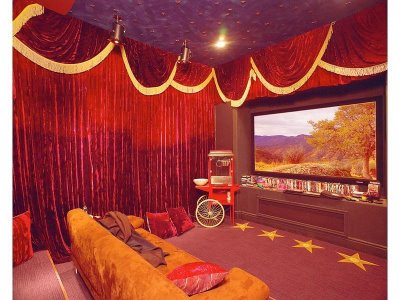 5. Ashlee Simpson probably sang in at least one of the showers. The psychic residue remains. (Just a warning to potential buyers - she may have "hootenanny danced" in the shower, too.)

I think I'll pass. Bad juju there. And, uh, Nick? Frankly, hon, I think you dodged a bullet. You can stop the subscription to "Highlights for Children" now. Find a nice girl who can at least read the stuff between the ads in Vogue. Good luck.

And to the Los Angeles people who might swing past here - can you recommend a really good breakfast place in the WeHo area? Muchas gracias for the information!!

I guess Jessica's getting custody of the twins.

Did you also notice that Nick's brother Drew is a "celebrity" on the new ice-skating-with-the-stars show?

"It's haunted by the Ghost of Love Lost."

Always - that's beautiful. I guess, if you count the twins, there were four occupants in that house...

PT - I haven't seen this one yet. I'm behind on all my reality/competition shows. Although, one of my favorite guilty pleasures is coming up - American Idol auditions. I don't care squat for the actual competition, but the auditions can be hilarious and terrifying all at once. :-)

Doughboy's on 3rd st. Not exactly WeHo, but not that far either. Awesome stuffed french toast. If it's brunchtime on the weekend, be prepared to wait a while.

I don't understand what attracts men to stupid women. Sure, she has big breasts and a good body, but even Nick should want to have a conversation sometime.

Have fun in LA