Anyone who's visited this blog knows that, unless I'm taking pictures of neon signs at night, I'm not a gifted photographer. So, I have to apologize for both the quality and dearth of photos in these posts. The Sasquatch and Gonzomantis took some excellent photos with the 'Squatch's camera, so be looking for some quality stuff on his blog. 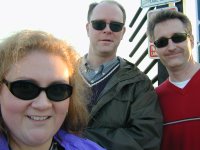 Three people insane (or stupid) enough to travel across country for 48 hours in Los Angeles. Yeah, we are nuts. Most people would not want to take a six-hour flight anywhere just for a 40-minute music set, but we are clearly not most people. Did I mention, we are nuts?

Thursday was an insane day for me at work. I was a human ping-pong ball, running from building to building, meeting to meeting. I had an appointment at 5 p.m. to finally get the vast tracts of grey covered on my head. It was bad, folks. I looked like a 50-year-old trailer park princess. Fortunately, the guy who cuts my hair is just one block away from my office. I hope he never leaves. Within an hour, he had taken 10 years off my head (if only he could do that for my body, too!) and, frankly, my hair was glamorous - silky, straight, shimmering. It was awesome.

Then, of course, I walked out into high winds and it was all over. I had five minutes of good hair for the weekend, and then, once again, I was Frizz Queen. I give up on looking glamorous for more than a split second.

Hats are, I think, a good option for me.

I got home, hashed out a departure time & plan with the Sasquatch (up at 4 a.m., at the airport by 5:30...), packed my bag, and then attempted to sleep. And failed miserably. I found myself watching Iconoclasts on Sundance at midnight - it was Mario Batali interviewing Michael Stipe, and I was strangely fascinated. Eventually I dozed off around 2, feeling overtired and cold. My phone rang at 4, with the Sasquatch wake-up call. We both must have been talking with our eyes closed, hoping that this was just a bad dream. Nevertheless, I got my carcass up, dressed and dragged my luggage to the car. The windchill was something around 25 degrees, and I thought death was a good option as I got into the car. Somehow, I'd managed to forget my little $1.50 stretchy gloves inside the apartment, but I was too damn tired to walk back for them. (This is utterly pathetic, as my car was directly in front of my building, but, seriously, I was not awake.)

I retrieved the Sasquatch and we motored out to Dulles. It was a fairly quiet trip. We are Not Morning People. Although, Squatchito noted that it was still officially NIGHT at this point. We found a spot in the Gold economy lot at Dulles (this is important - it will play a role in our return trip) not far from a numbered shuttle stop. Much to our joy - mine in particular, as I was freezing my ass off - there was a shuttle waiting to take us to the terminal.

Our only company on board the bus was a family headed for, we guessed, a weekend in the islands. However, somewhere between home and the shuttle bus, Mom had managed to smack her head into something and her brow was bleeding profusely. Grandma kept saying, "Just keep pressure on it. It's only bleeding that much because it's so close to you eye!" Wonderful. Nothing makes a trip to the Bahamas more fun that a bleeding head wound!

Meanwhile, the Sasquatch and I just rolled along, barely awake. 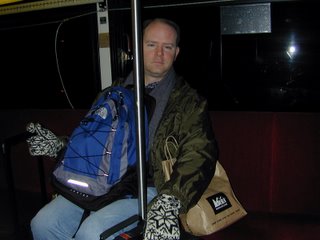 The elusive Sasquatch, not awake. (Will kill me when he sees I posted this.)
Check-in and security was, for once, not a hassle. JetBlue has a very user-friendly automated check-in system that worked well for us. And the TSA folks were friendly. Well, as friendly as TSA folks get. I guess the key is traveling at the crack of doom. Although, at 6 a.m., Dulles was already hopping.

We had to make the Bataan Airport Death March to our gate, theoretically in the B Concourse. (It was more like the Ass End of Hell Concourse.) Our wait was minimal (I've never timed my arrival at an airport quite so well before - it was pretty cool), boarding was a breeze, and the Sasquatch and I had a row to ourselves. 36 channels of DirecTV, tasty snacks, and seven hours of music on my crappy mp3 player, and we were set. Of course, we'd both hoped to sleep on the plane, but that did not happen. No problem, we figured - we'll nap in the hotel before the gig that night. (Ha, bloody ha!)

We got to the Long Beach airport right on time, and I had my demi-semi-kinda celebrity sighting in the arrivals area - Tim Gunn, from the Parsons School of Design. (If you watch Project Runway on Bravo, you know who Tim is.) He was walking with another dapper middle-aged man. No one else seemed to notice him - apparently Long Beach isn't rife with Project Runway fans.

A note about the Long Beach airport: it's small (which is very nice), but has bathrooms in serious need of remodeling and better ventilation. 'Nuff said. I do love an airport with an outdoor luggage claim and a 2-minute walk to the rental cars. That was great. We got our boat of a rental (a lumbering Chevy Impala) and hit the road to fetch Gonzomantis at LAX. His flight from the Twin Cities was due in an hour after ours, and we figured we'd be right on time to collect him. Turns out, his flight was 45 minutes late, so we parked (after I got lost and circled the airport 1 1/2 times) near his terminal. The Sasquatch left him voicemail on his cell, and, having discovered that the seats in the Impala reclined all the way, we figured we could take a nap.

Again, we were unsuccessful. Instead, we ate chocolate and listened to a pretty brilliant mix CD the 'Squatch had agonized over for the trip. (Honest to god, he spent more time mixing two CDs for us than we probably spent in L.A. all weekend. But I appreciated the mood-enhancing effort.) Eventually, Gonzomantis appeared in the garage, and we were off to Hollywood!

(God, is this narrative like paint drying or what? Do I need to start paying people to read this?)

Handy hint, non-LA people: the 405 is overloaded with traffic no matter what day or time you attempt to drive on it. Seek other routes into the city! We got on the 405 at LAX only to find it simply was not moving. A mile or so (and probably 20 minutes) up the road, we saw a huge line of emergency vehicles (and saw some amazing auto ballet going between lanes and over median strips.) We made a command decision to get the hell off the freeway and take La Cienega the whole way up to Sunset Boulevard.

Fortunately, the whole ride to the hotel was basically "go north on La Cienega, turn right on Sunset, and left on La Brea." That's my kind of travel in an unfamiliar city.

We passed typical suburban homes, hillsides covered with working oil pumps, grand houses, strip malls, people in beaters, people in Bentleys, big box stores, and boutiques that probably wouldn't let me in the door. It was a weird amalgam of poverty, middle-class normality, and the trappings of wealth, all on one road. Here, a bail bonds office and a dilapidated motel... the next block, a trendy spa and a Ducati dealership. 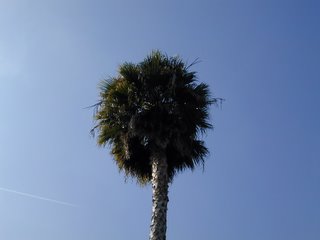 (Be back with more tomorrow night...)

Hallelujah and pass the tofu dogs, you survived L.A.!

Here's hoping I'll be seeing you again, because there will be another concert to attend!

The first photo is great, but I think it looks like a bad album cover. :)

As for the second photo...you're meat.

Great Minds - I was thinking album cover with the first shot as well.

Please-o-please, don't forget to regale us with the wonderful conversations of your hotel neighbors.

PT: Tofu dogs, heh heh heh. Should have brought my big pith helmet with me, eh?

Squatchito: Don't worry - you have blackmail material photos of me, I'm sure of it.

Gonzo: Why is it I look vaguely retarded in all the photos from this trip? I should be drooling, I swear. Oh, and I'll relabel us The Macalester Trio. Lame name for a lame album cover. :-)

Ugh, ugh, ugh! Been dying to hear about your trip and you leave us hanging! I've decided that you are evil and must wear hats to hide the horns! Welcome back; your office pals missed you. ;)

I think you've hit on a great idea. If only people would pay me to read their blogs... ;)

As for celebs, it's LA style to ignore them if you're a local for the most part. I once stood next to Debra Jo Rupp (mom on That 70s Show) on the curb at LAX. Didn't say anything but still got a kick out of it.

Will there be a sequel, or a prequel to this tale? LOL!!!

I await, swathed in anticipation!

I saw a bumper sticker today, it said:

"Where am I going?"
"And what am I doing in this Handbasket?"

It took me awhile to get it... and then, I immediately thought of you.

luuuuve your new profile pic. I'm reading, but I want a more detailed retelling of this weekend over lunch!