I just spent a few minutes reviewing my old blog. The Ur-blog. From the before time. Man, I was mean, catty, and really abrasive. I think it reflected how I was feeling abou the world right then - particularly about the craptacular federal office where I was toiling. I stopped writing in that blog in February 2004, but I almost don't recognize the person who was writing all those snarky diatribes. I'm damn glad I mellowed out a wee bit (and that I work in a sane, wonderful place now!)

I may have to go and completely erase that old blog from existence - it would not be a great creative loss. (Although it did herald the first public appearance of the Hideous Carpet.) Eh, maybe I'll keep it around. It serves to remind me of what a dark place I was in, and how much better my world is now.

On a completely unrelated note, it was 60 degrees today. SIXTY. WTF, man? This is simply not normal for DC in January. Yeah, we have wussy winters, but not shirt-sleeve wussy. Don't get me wrong - I was totally digging the spring-like thang, but I had no idea how to dress for work. Was Mother Nature's bipolar, off-his-meds Cousin Weather going to knock the temps down massively by the end of the workday, or would I be sweltering in my jacket? (For the record, I was sweltering in my damn jacket. I chose poorly.) 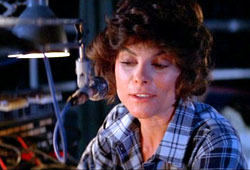 Plus, my neighborhood (like much of the DC area) was blanketed in bizarrely dense fog when I got up. My street looked like the set from a John Carpenter movie. I was waiting for the homicidal pirates and Adrienne Barbeau to show up. And, apparently, we get even more fog tomorrow! Yee-haw!

This was the only picture of Adrienne Barbeau I could find from "The Fog" (which was an awful, awful movie.) She was a DJ in some podunk coastal town before the fog rolled in and the evil hook-y homicidal pirate zombie/ghost/whatevers showed up on the scene. This does remind me - I'll be on the radio again next Friday, January 20th. I'll post a note about that next week.

I'm still feeling a bit under the weather, and I'm annoyed that I'm not feeling more perky and creative. Sorry to say, you guys lose out to a hot shower, the sofa, and whatever I just got from Netflix.

If anyone has any good suggestions for returning my perk to its rightful place, let me know. I hate being a bland lump.
Posted by Merujo at 10:53 AM

I dunno, Merujo. You still seem to be posting more than me, and I have no excuse. I hope you're feeling better.