It’s not that I don’t have a sense of humor.

You can ask the people who hear me cackle from the down the hall at work.

But, I am the first to admit, I can be humor-impaired from time to time. If you were to ask my closest friends, they’d likely tell you that I really have mellowed in recent times. I think the events of the past year helped to strengthen my psyche (although, strangely, I do cry much easier now at sappy things on TV. Go figure.) But sometimes, I can still get a stick planted somewhere in my anatomy, and it takes me a while to dislodge it.

Last weekend, the proprietor of a humor website decided to post my blog profile picture with a critique of my appearance and a slam of my blog. In particular, he took a swipe at a post where I’d discussed the failing health of a family member. It was weird. Creepy actually. I have no issue with him reposting my profile picture, which was just me in my winter hat. (He even mocked my hat. WTF?) Fair Use laws support his right to post my photo with “commentary.” It wasn’t as if my photo was a secret. And I know I’m not exactly gorgeous. I’m just a fat 40-year-old woman with glasses and, periodically, a limp. BFD. Why and how this stranger came across my blog, I have no idea. I can only assume someone found me somehow and decided that I was unattractive and that, for some reason, was worthy of comment. The only reason I found out about this was that I followed an unfamiliar link off of StatCounter. 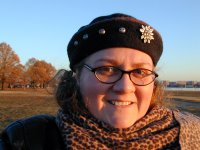 The photo - and hat - in question. The hat was really expensive, by the way. $65. (It's boiled wool from Austria.) I bought it for myself when I got a promotion about 8 years ago...

It did bug me that this person would direct folks to that specific blog entry on my site, especially as it touched on something sadly personal, but again, that’s his deal. I guess if I’m on the steam train to Hell, he’s likely on the bullet train. I chose to respond to him with a fairly upbeat comment. Free speech is free speech. Whatever. All I can do, in demonstrating that I'm not a humorless troll, is to kill 'em with kindness. But when I posted that response, I saw something that bummed me out. Someone else had left a comment, noting that all the blogs mocked were crap – uninteresting and rambling garbage. Usually, I wouldn’t have blinked, but the commenter was someone who shares a “blog friend” in common with me. I'd seen her name on my friend's blogroll. I would have figured that she might have seen mine. (Apparently not.) And so, I wrote to her. Why, pray tell, did she think my blog sucked so very much?

A day later, I got a rambling response. Oh, I didn’t mean your blog! I meant the others. And, uh, actually, I never even went to your blog. I’m not a hater…

Uh, okay. So, just for your entertainment, you dis a pile of strangers? That’s weird. I did not respond to her. (For the record, I did visit her blog – I especially enjoyed the entries that were just photos of her yellow lunch bag and her kitty cat. Wow! Now, that’s entertainment!)

In response to all this, I pulled my friendly welcome post to the new readers who visited after my most recent WAMU commentary. (I had received a handful of “Hey, you suck!” e-mails by then.) I replaced my cheerful message (complete with welcome mat images) with a fairly terse one, with a link to the post I wrote about my mother. I’ll take any opportunity to share my mom’s story with people, but I’ll admit, it was also sort of a preemptive “F U” message to anyone coming to my blog from the "humor" site. I was daring them to say my mother’s story was uninteresting, rambling crap. I’m not about to win any prizes, but I’m not that bad a writer, either. And, screw them all, I totally dig my winter hat.

So, along with feeling a wee bit under the weather, I’ve also simply been annoyed for the past few days. Figured it was worth explaining my absence. I’ll get my sense of humor back in place, and all will be well.

First of all, I have enjoyed your blog from the first entry I ever read, and you have CONSISTENTLY provided good text to follow.

Next: Adore the hat. Very chic, but then I've told you this before.

I wish you would list this person's blog in your text, just so we could go visit it and see what's so great about them. I would not be in the mind, however, to read slamming comments against you. When blogs attract spammers and people who go out of their way to be nasty, the only thing I can think is "mental illness" of some nature.

That's the very sort of thing that makes me wonder if more hits is actually a good thing.

I don't expect everyone to like every blog out there, but why go to the trouble to slam someone else? It makes me think he lacked the imagination or creativity to post something of his own.

I've just recently run across your blog by randomly clicking from the front page of blogspot. I immediately added you to my blogroll because your blog is fun.

The guy who slammed you obviously makes himself feel better by putting others down...probably because he has nothing better to offer.

Thanks, all, for the good thoughts - and the hat compliments again, Cube!

I agree that there's something sad and kind of sick in just slamming people for no decent reason. It smacks of not just illness, but of a deep sadness and personal dissatisfaction. What has to be wrong in someone's life to want to just mock people? It's very "junior high" and, after a while, it has to be like a cancer to the person doing it.

You can't just be cruel to strangers and not have it eventually affect you...

If I ever start a blog, maybe I'll name it Yellow Lunch Bag.

Cheer up Merujo, the fact that someone decides to slam your blog is the proof of it's major success!

I'm half envious, actually - only the ones that matter get such attention!

I'm a regular at your blog and I'm totally enjoying it!

well, you know how i feel about you, your blog and your hat, but it bears repeating. all three rock. (((BIG HUGS)))

Okay, Pirate Twin, you just made me laugh really hard! I love that idea.

And, as always, Rarity and Suze, thanks for the nice, nice comments. Wait. I can do that in language specific ways:

What a freak this "person" is.

I have to say I really enjoy your blog. Your stories are *always* interesting and well written. You've had an interesting life- I feel happy that I get to share your experiences since they are just so well.... interesting lol

And the hat - it looks just fine! hey if you can get a hat on your head in the first place I think you are one step ahead of me. (I have a giant head)

Thanks! I have a giant head, too, which is specifically why I love that hat!!

I too found your blog for the first time today just by clicking around. I think the story about people making fun of other people's blogs is SAD! How mean, here you were writing a deeply personal postand some smart ass does something like that. You are being a lot kinder than I would be. I think it would be enough to make me quit blogging, actually. I like how you decided to handle it. I don't have a blogger blog really, my real blog is rambling-rosebud.blog-city.com just so you know this is for real. Take care!

You, your hat and your blog are all beautiful to anyone who's paying attention.

The story of your mother is the first post I ever read on your blog, and I've been coming back ever since. If someone who writes a HUMOR blog can't find something worth reading in yours, then I would question just what it is he finds funny. I'm always sending people to read what you write. Screw the mean people.

I am only here for the hat.

I find myself telling other people about your stories.

That, my dear, is success.