It's Better To Travel, Part II

Much like getting from to , getting from to was a logistical cakewalk, too. Head west to , hang a left and keep driving south for three more hours. It’s not the most exciting ride.

But, when you’ve been driving the same crowded, road-ragey 16-mile commute into day after day, flat, wide-open farm land and clear skies as far as the eye can see is a true pleasure.

En route to , one of my landmarks on Route 80 is the amazingly huge Iowa 80 truckstop in . The signage claims it to be “the world’s largest truckstop.” Now, it’s big, folks. That’s for sure. But what person or independent agency is traveling the world, measuring the square footage of truckstops? I discovered later on the trip that the claim of the Iowa 80 people sticks in the craw of my friend HoyaMeb, too. She’s pretty certain that on some barren stretch of road in the former or at a busy hub outside of , there’s surely a truckstop that will put the folks in Walcott to shame.

I tend to agree with her. 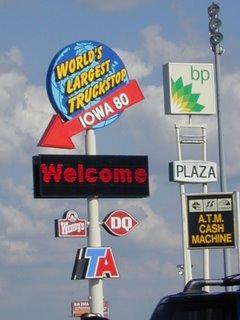 Just 20 miles or so south of , I came across a big white sign next to the highway. I almost drove off the road in sheer amusement. It simply read “TREK FEST – LAST WEEKEND IN JUNE” and featured a red outline of the old Starship Enterprise. The next exit was for .

Too damn funny, and too good to pass up. 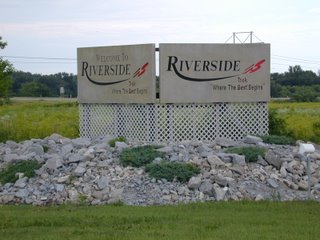 I drove into , a tiny town of neat little homes surrounded by lush green fields. There’s a big sign as you enter , noting it as the place "where the trek begins.” Again, the makes an appearance, whooshing across the sign. (Which is right next to a place offering locally-made elk jerky. Let me repeat that: elk jerky.)

I found the local gift shop, across the street from the small post office and the grain mill. There was virtually no one on the street, and the gift shop was closed for a few days. A sign in the window actually said “Gone fishing.” I assumed that the proprietors were getting ready for the upcoming Trek Fest and the brief, annual infestation by Trekkers from far afield. A flyer in the window advertised events for the event: 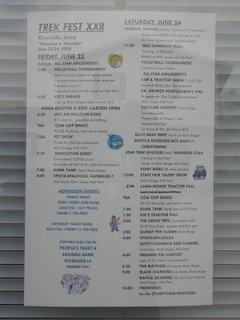 There were more activities planned, but I was taken by “Spockapalooza.” How could you not love something called "Spockapalooza"? There was a certain sweetness to the cheese. 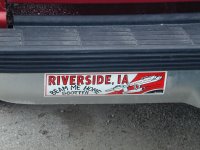 My brother Ed had been a big Star Trek fan, as was our mother. They both knew their Trek shit, big time. I would be swinging through on my way back from the cabin, so I determined I would bring my brother’s ashes for the festivities. He would have gotten a hell of a kick out of it.

This area had been Native American ground. Chief Wa Pel Lo of the Sac and Fox tribe had settled his people around the area that would eventually become the city of , back in 1838. He’d had to move his people several times earlier, as white settlers encroached on native lands. His decision to move the people to this spot near the was based upon the fact that his great friend, , had been assigned to be the Indian Agency head in the area. Wa Pel Lo and Street had a legendary friendship that had gone on for decades before the move to . When Street died in 1840, Wa Pel Lo asked that he be buried on the agency lands. And, when Wa Pel Lo died just two years later, his final request was to be buried alongside his friend. His body was carried by oxcart to join his “white father” (his term, not mine) in rest.

Wa Pel Lo’s legacy in life had been to hold on to as much of as possible for the People. But, only two years after his death, a council with the Native Americans, the USG, and the American Fur Company sealed the purchase of the lands from the Native Americans for the equivalent of $800,000, all in silver coins. Within four years, the USG had removed the People from and pushed them west into .

The names remain – Wapello, Keokuk, – but the People are gone.

is a pretty damn white place.

Home to early Mormons traveling west to . Home to Amish farmers who still work the land and live their plain lives.

And home to a lot of Swedes. 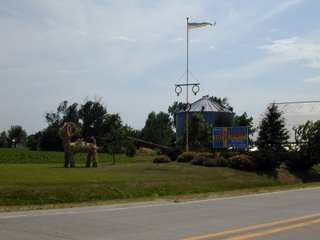 So many Swedes, in fact, that the road to Wapello takes you past the town of , location of the . I had to stop and take pictures. After all, who can resist the siren song of a giant straw goat and waving Swedish flags? The town appears to be all of three city blocks, and, during my short visit, was filled with people wearing yellow and blue polo shirts. Either it was a Swedish family reunion or a training event for IKEA employees. You make the call. 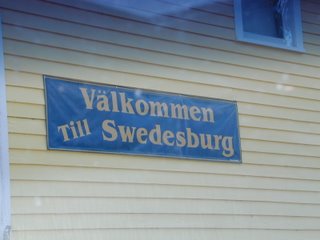 Swedesburg has a miniscule post office, the museum, a handful of real goats (to go along with the straw one), and, of course, a Lutheran church. It somehow felt appropriate to be stopping in just a day shy of Midsommer. 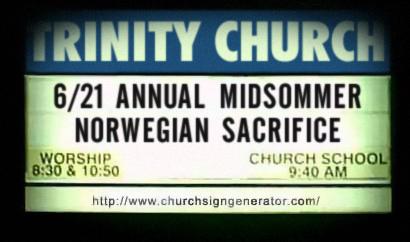 I finally decided to get back on the road when I realized that people in yellow and blue shirts were staring at me in my utter non-Swedishness. Time to get my Irish mongrel butt out to the lake! 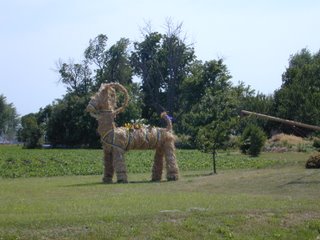 I stopped for gas in . Don’t know ? If you’re my age or a bit older, you might. Remember Doug Henning, the 70s magician with the sweet buck-toothed smile? (He was mocked unmercilessly on Saturday Night Live back in the day. “Everything is possible in the world of illuuuuusion!”) Henning, who died in 2000, was a believer in “yogic flying” – where followers of Mahareshi Mahesh Yogi, practitioners of transcendental meditation, would bounce a few inches off the ground in what they deemed to be “flying.” Hey, if it works for you, I say, go for it. I don’t think my bad knees are up for it, thanks. 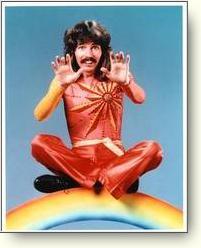 The Maharishi decided to open a university in the peaceful prairie lands of , and Henning – the most successful magician in the world in his heyday – helped to bankroll it. The Maharishi University of Management (offering all your standard degrees, plus one in Maharishi Vedic Science) still operates today in – the gleaming golden domes of its TM palaces looking just a little worse for wear in our cynical, skeptical era, and the center of town has more Indian restaurants and “wellness centers” than you can shake a stick at. Had it not been so late in the day, I would have been thrilled to stop for a nice massage. (Damn, that sounds pretty good right now.) But I still had a cabin to reach, and two sisters and two nieces waiting for me.

I barely saw – I was tired and just wanted to stop driving. I could not help but smile, though, and think of Radar O’Reilly, and the fact that I’d driven through the hometowns of two of television’s best known characters that day. I stopped at the local quickie mart for gas.

This is the local quickie mart: 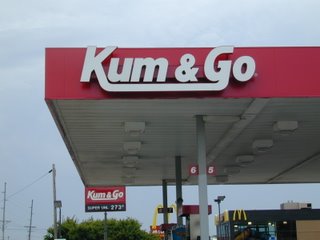 Yes. The Kum & Go. Yeesh. People who grew up with it don’t blink an eye. The Sasquatch, who was surrounded by Kum-tastic kommerce as a Nebraskan kid, doesn’t get my squeamishness over the name. He doesn’t regard it as the bad sex joke I do. 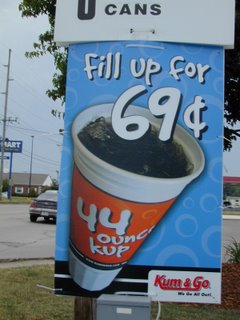 You’ll note that they have a 44-ounce “kup” that’s sixty-nine cents (“69, dudes!”) Yeah. A 44-ounce “Kum Kup” for sixty-nine cents. Again. Yeesh. They also sell this nightmarish giant drink barrel, that I assume was designed for the long-haul truckers who fill up their semis with Kum & Go diesel and their bellies with cheap fountain Cokes. I uncharitably dubbed these ginormous vessels the “Kum Buckets.” (You should have seen my colleagues SAM and JJ when I mentioned this yesterday. Beee-yooot-i-ful. I should have brought one of those damn things back with me.)

My car refilled, my tasteless photos snapped, I made the last leg of the trip to the cabin. I met up with my sisters at the local launderette in the town of , a few miles from the park. It’s the last place where you can get cell service on your phone and, other than a small Amish grocery, it’s the last sign of American commercialism before hitting quiet wilderness.

Quiet, that is, if you don’t have a crabby teenager with you…

Well, I know I'm gonna have to stay the hell away from Swedesburg in june as they apparently sacrifice good old norsies in order to celebrate midsummer... ;o)

Have a safe journey now!

I am scarred for life.

To think you could get such vile humor from a beverage.

Out here in the desert there's a tiny tumbleweed town called Baker, which features the World's Tallest Thermometer. It's on the road between L.A. and Vegas. It's pitiful, but doesn't make as bad a claim as World's Biggest Truck Stop. That's just wrong.

I so enjoy road trips and the silly things one can encounter along the way.

Pirate twin: I've seen that thermometer! It's funny because I inadvertently made it look pitiful by taking a shot of it with my panoramic camera held vertically, so sky takes up half the picture.

One time in high school (in Nicholasville, Kentucky) one guy brought in a sketch of a cow field and proposed that people bet on where the cow would poop that night. It was a cow pie betting pool.

I did not participate.

If I had encountered the Kum & Go, I guarantee I would have stopped and taken pictures too. That is hilarious.

I love that you quoted Bill and Ted.

Great travelogue, great photos (although the Doug Henning one will probably give me nightmares.)

I cannot believe that the 69-cent price of the Kum Kup (I shudder just typing that) is a co-incidence. Kum on!

OH MY! You brought back some good memories with those travels through Swedesburg, Fairfield, Wapello, Riverside, Iowa City...sigh. Almost makes me want to sell an organ to get the money to go home.

I'm giving you a shoutout today.

in high school, the name for Kum & Go was "Orgasm Split".