You know it's never good when you see a big photo of a young celebrity-ish person topping the page on CNN.com first thing in the morning. It means someone's been arrested.

I should not be astounded, considering what he chose to do for a living. But he seemed to live a charmed life, albeit one with bites and cuts, for certain. And he wasn't was insane like Timothy Treadwell.

Steve Irwin, the Crocodile Hunter, is dead. Killed by a stingray barb that punctured his heart. According to witnesses and a doctor who tried to save his life, he never had a chance. According to a Reuters piece I just read, it wasn't the venom of the stingray that killed him (although that would have been horrifically painful), it was the sharp barb on the tail, which rips flesh apart on the way out.

A few years ago, I took a trip to Mexico with my sister the Shopaholic. We spent Christmas on a Caribbean beach in Tulum, down on the Yucatan Peninsula. The hotel was lovely, the beach was lovely, the pool was lovely, the Mayan ruins were lovely... only problem? Freakishly unseasonably cold weather settled in just as our plane landed. What should have been lounging and snorkeling days in the upper 80s and low 90s became chilly days in the 60s and 70s. Brrrr. I slept with furry socks on.

But I am an avid snorkeler, and nothing was going to keep me out of the water. Only two other vacationers were venturing out that first morning, and they were in an inflatable boat. My intention was to stay right by them, inside the coral wall that kept the surf from hitting the shore with any force. I stepped into the shockingly cold water (wishing I had some sort of insulated body suit and not just your basic swimsuit) and walked out a few inches. Immediately, I saw a sea turtle move out of my path. I was so excited, I got my body down into the water, even though it was just a bit over a foot deep. I wanted my prescription snorkel mask in the water, so I could see everything.

And, boy, did I ever see everything. I had plopped down into a foot and a half of water directly on top of an enormous stingray. Fucking huge. Just chilling out directly at the shoreline. Its body was stretched out under my face and chest, and I knew its long, barbed tail was trailing out under my legs. And my belly was hovering mere inches above this creature.

And I panicked. Quietly. My heart was just about pounding out of my chest. I couldn't figure out which direction to swim. The water was so shallow, I was afraid if I went backward, I'd run my feet and legs directly into the tail as I hit the bottom a couple of inches away. I was afraid if I went forward and brushed its "face" it might freak out and instinctively strike out with that damn barbed tail.

I did this ridiculous panicky hand paddle sideways, all the while gurgling "oooomigod, ooooofuck" into my snorkel. I'd love to know what that sounded like from the beach, where my sister, blissfully ignorant of my distress, smoked a cigarette by the frigid pool, shooing away the tiny black flies that had arrived in an infestation, along with the strange freezing weather.

The ray never moved. (Thank god.) I feel very fortunate. I know that they will only attack and lash out with those tails when they feel the need to defend themselves. I think I'm very lucky - it's just chance that I didn't step on it when I got into the water in the first place.

I actually have a photo of the stingray. I managed to snap one after I'd gotten far enough away to feel safe. I'll dig through the Mexico photos and post it. It's not a good photo - taken with unsteady hands and a throwaway camera - but it shows how big this damn thing was. That almost ended my snorkeling for that that trip. I was shaking like a leaf and pretty freaked out. But the sighting of another sea turtle and gorgeous coral and fish - with no other swimmers to disturb it all - kept me in for another hour. (And then, I was almost blue when I got out. Next time: buy a body suit, just in case freak weather sets in again.)

And this time, the critter won.

Steve Irwin was over the top (sometimes embarrassingly so), and he took a lot of risks. But I think he had a very good heart and really wanted to share his knowledge and love of odd creatures with the world. He genuinely cared about the critters he worked with. (If you ever saw the episodes of "Crocodile Hunter Diary" where he was sheparding his dog through cancer treatments, you'd have no doubt of that.) He was, I think, a pretty good guy.

G'bye, Steve. Rest well. Hard days ahead for your wife and kids. I hope they weather this well. 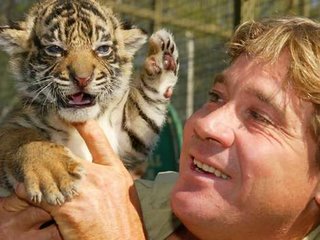 What happened to Steve just breaks my heart. I am a fan of his and I can’t believe he is gone.

To Terri, Bindi, Bob and the rest of Steve’s family, I pray for you all and will continue to do so.

Steve made such a positive impact on the world and he will be greatly missed by many.