This is a good time to remind you fine folks that Frank "PostSecret" Warren has published a second book of postcard confessions. The new book, "My Secret" features postcards from young people. I think I mentioned this before, but when I went to one of Frank's talks at the Barnes & Noble in Rockville, Maryland, the majority of folks there were teens. And they treated Frank like he was a rock star. Some of these kids were so nervous their hands shook as they approached him. PostSecret may very well save some fragile teenage lives - if sending a postcard to a stranger stops a kid from considering suicide, that's an amazing thing. Absolutely amazing.

I just went for my weekly PostSecret fix, and my jaw hit the floor when I saw this one: 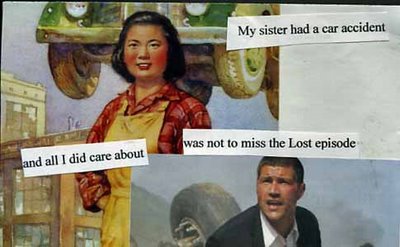 Now, there's one for the Lost writers' room wall...

I love PostSecret. In fact, I just had my weekly fix about twenty minutes ago (first thing I did when I turned on the computer this A.M.) I saw Frank at GMU a few weeks ago and really enjoyed his presentation.

The postsecret you highlighted this week struck me, too. I'm speechless to describe the thoughts and emotions running through my head from this one.

It could have been me. The postcard, I mean. When I lived in England, another Norwegian and I were going on a guided tour to somewhere, but on our way to the bus, to avoid being hit by a car coming from the wrong direction (as cars tend to, in Britain...), my friend ran across the street, stumbled on the kerb, and fell - face first - into a brick wall. Naturally, the first thought in my mind was "believing I had supernatural powers, I slammed into a brick wall" (as Paul Simon once so fittingly describd it).

Then I thought - damn her, I really wanted to go on that bus trip! That very nice Irishman was going too!...

But then I helped her find her teeth (kidding!), I mean, helped her to her feet. And the next man walking by (this was an early Sunday morning) just happened to be an ambulance driver off duty - but he went home (about 50 yards off!) and got his ambulance, and took us to the hospital.

Later, I told her about my first (Paul Simon) thought, but not the second one...