Altered Images from an Altered Mind

On Monday evening, I staggered out of work in a stunning amount of pain. I couldn't find a single comfortable position - sitting, standing, doubled over... hell, I probably would have been thrashing around, sobbing, had I been in a place where I could lie down.

For a minute or two, I found a relatively decent spot, leaning up against a pillar on M Street. The pillar was broad, and the cool stone felt so good on my spine. I have been trying to teach myself calming breathing techniques, although I forget to stop and breathe as often as I should. But on Monday, I tried my best to invoke some zen as I took in somewhat jagged cleansing breaths on a rush hour sidewalk.

My cell phone was in my pocket, and I pulled it out to call the Sasquatch to ask if he could drive me home. I could hear the "bees" buzzing around my head - a sure sign that I'm about to pass out. My hand was shaking as I held my phone, and I accidentally turned on the camera function. Looking up, I saw the most fascinating, fast-moving cloud formations passing overhead. To be honest, I wasn't sure if it was real weather or just my vision fuzzing out before fainting. From my spot leaning on the post, I clicked a photo. I'd forgotten that I had set the camera to "aqua" mode a few days before. This is what I saw. Click on the images - they're much cooler in larger format: 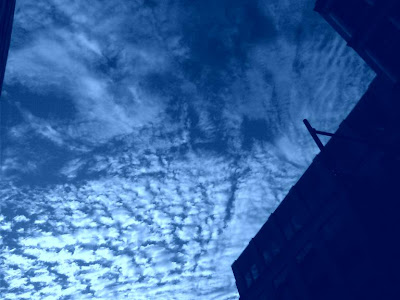 I switched the setting to sepia, and another cool image of the rapidly changing sky appeared: 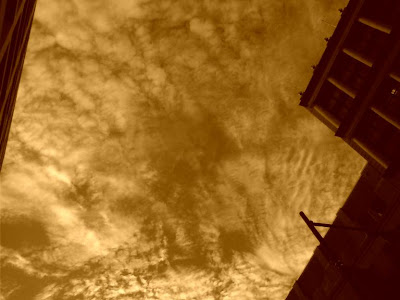 NEA in the sepia light
Switching back to aqua, I caught the pavement beneath my feet: 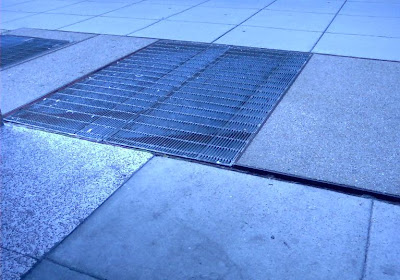 M Street. Blue street.
And, before finally sliding down the column to a very uncomfortable, very lightheaded crouch, I caught these buildings at the corner of M & 15th: 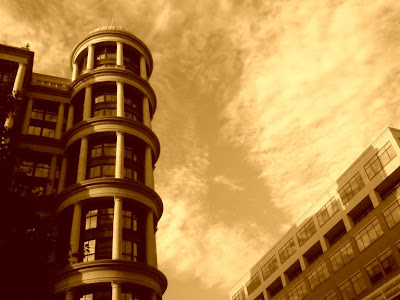 The ordinary, transformed, by simple pocket technology
I was so ill Monday night, I completely forgot I took these pictures until just now, when I received a message from a family member. Once again, I bumped the photo button, and my little gallery of images appeared. Not bad for a nearly unconscious, non-photographer!
Posted by Merujo at 2:28 PM

The photos are gorgeous and seem to tell the story of your pain. Incredible.

I'm so sorry you're suffering. I hope it gets better soon. xoxo

I'm so sorry you're in such pain. The photos are wonderful and hopefully compensate just a little?

I love the sky and I think I know that building. . . these break my usual thought that real photos are a dying art due to crappy cell phone cameras. Good non painful thoughts going your way.
R

You do good work when you are semi-conscious! I especially like the last one. I know, small compensation for nearly passing out on a public street, but still...