I'm very late today in getting my weekly PostSecret fix. I've been taking it easy most of the weekend because the spine has been hurting so very badly. There's been a lot of extra power lounging the past two days, despite me having a good amount of stuff to get through. Finally did laundry today (and I'm sure my coworkers will be happy to know that) and got the dishes done. I still have a bag of cherries in the fridge, dying to be turned into another clafoutis, and we'll see if I have the oomph to get one done this evening.

I went to visit PostSecret, and among the postcards Frank put up today was this one: 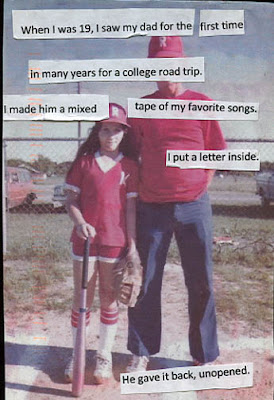 I actually said "awww, no" out loud and then, I nearly cried. With a little editing, that could have been me writing the card.

Longtime readers of my blog know that I had a very... challenging... relationship with my father. Put simply, he didn't like me much. When I left for college, I was sad to leave my mother behind, but relieved to no longer be living with my father, someone who disliked my presence quite a bit. Even though it probably wasn't possible, I still wanted this man to - if not love me - at least like me. It left me with a lingering, almost perverse, desire to please people - a desire I'm still fighting to leave behind today. Approval, affection... things I craved as a child and still wish for today.

My first semester in college I heard about an Irish import store near downtown St. Paul, Minnesota. My father was mildly obsessed with his Irish and Scottish heritage and listened to Celtic music all the time. He even had a multi-LP set of bagpipe music. Who buys a SET of bagpipe LPs? My father did.

Now, my arrival at college coincided with the popularity of the music of Clannad hitting American shores. As soon as you heard the ethereal sound of Maire Brennan (Enya's sister), you knew eventually you'd be hearing the group on "A Prairie Home Companion" and seeing them in concert on years and years of PBS fundraising drives. And my father really dug the first cassette of theirs he'd found in a local music shop. At this point, my hometown of Moline, Illinois wasn't exactly a music mecca (it didn't have the Mark of the Quad Cities - now known as the "i wireless Center", apparently - back then) and you had to special order more obscure music that wasn't on Casey Kasem's radar or being played on our local NPR station. I can't think of a single used music store in the area back then, come to think of it.

So, when I got to the Twin Cities in 1984, I felt like I'd reached musical Nirvana. I nearly lived at the Cheapo's record store down the street from Macalester. I went from, if not zero, ten to sixty in a very short time. It helped that I had friends whose musical boundaries were already much wider than mine. Seriously, I came to college with a cassette of Alan Parsons Project's "Turn of a Friendly Card" (store-bought) and another of Thomas Dolby's "Golden Age of Wireless" with some Michael Praetorius on the flip side (taped for me from LP by my friend HoyaMeb). 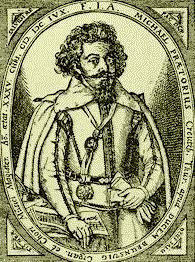 Michael Praetorius. (Not Thomas Dolby.)
So, when I heard there was this little Irish gift shop down Grand Avenue a few bus stops from the college, I decided I should take a trek there and see if they had any other Clannad music to send back home. Yet another step on my flat-footed journey to fatherly approval.

I was thrilled to death to find they had two Clannad cassettes my father didn't own. They looked pretty crappy in a "our band produced these in the basement of the family home in County Donegal and our cousin made the cover inserts on a color copier" way - these recordings clearly pre-dated Clannad's success, riding the crest of the Irish music wave in the 'States. I bought them both and took them back to my dorm room. I remember agonizing over the letter I wrote with the two cassettes. I hoped Dad would enjoy them. Maybe Dad would call me and let me know what he thought. Maybe I could go see the Chieftans with Dad if they were playing in town the next time I came home.

I rubberbanded my letter around the two cassettes and sent off the little parcel.

I never heard from him.

Mom said the package had arrived.

But that was it.

A few years later, after Dad died, I was going through a junk box in the basement. In the middle of some flood damaged papers I found the parcel I'd sent to my father. The letter was still rubberbanded to the cassettes. It had never been taken out of its envelope. I broke off the yellowed, brittle band and saw that the cassettes were still wrapped in their factory cellophane. He'd never listened to them. Never opened the letter. Just tossed it aside.

I threw it all out.

I wonder if he would have tossed it aside had I handed to him in person. Would he have given it back to me, unopened, like the girl in today's PostSecret?

But I know that familiar feeling of loss. That familiar belief that I'm not worthy. When I think of my father, I often hear a song in my head. It's Morrissey, singing "I know I'm unloveable. You don't have to tell me." It's hard to not feel that way - as a little girl, as a teenager, as an adult woman - when the first man in your life, your father, finds you so unpleasant.

It would be good to feel loveable in this life. I'm still looking for someone who sees me that way. Someone who will tell me that.

I don't have much in my life. But take it, it's yours.

I hope that girl found someone who took that mix tape and listened to it.

We all need someone like that.
Posted by Merujo at 8:27 PM

Just in case the previous comment didn't go out properly:

Melissa,
Some people are just assholes. They may have some personal justification for their being assholes but assholes they remain.

You are one of the warmest, most intelligent and witty people I have never met. We've known each other on-line for approaching 20 years now and I feel that I can judge your worth by now. I love you!

You have lots of people who love you, even if you haven't found a "special someone". I know it's not quite the same, but at the very least you should know that you are a lovable, worthwhile person, and many have recognized it.

It is awful that your father didn't bother to see what a wonderful, intelligent, funny, thoughtful person you are. You lost out due to his selfishness. But he's the biggest loser--he never even knew what an amazing daughter he had.

I've been a lurker on your blog since you were a guest writer on A Rubber Door. (I'm also on the Michael Penn fan list.) This story about your dad was so gut-wrenchingly sad that I finally had to write something. Obviously I don't know you personally, but just from what I've seen you write to the other Michael Penn fans and on your blog, you strike me as someone who is incredibly intelligent, warm, creative, thoughtful, and interesting. I'm so sorry your dad never recognized all your good qualities and, in fact, left you feeling unloved and unworthy. I truly hope that you will find someone to love and appreciate all that you are!
Wishing you all the best,
Julie

That was a very powerful blog post, and I know it couldn't have been easy to write. I'm still trying to get up the gumption to write a post about my father, with whom I had a rather complicated relationship. We'll see how that goes.

I'm sorry your father couldn't appreciate what a wonderful person you are. It was definitely a huge loss on his part.

Melissa, I'm so sorry. I cannot fathom doing such a thing as a parent (then again, I'd be thrilled my college daughter wrote me something and mailed it, with pre-popular Clannad tapes to boot). Frank's a cool guy; maybe you should let him know of this post.
I'm glad that you could write it. It must have hit you like a thud, as if you need more thuds in your life:)
- Robin

I am left feeling empty inside for you. But you know, few people would write about their loss and longing as beautifully as you do.

Melissa -- It's funny how those old tapes keep playing in our heads. You are talented and funny and someone I would like to have as a friend if I lived in your area.

Despite the people in your life who love you, it's the one you want to love you the most whose opinion seems to matter.

You are enough, Melissa. If you want someone to see you as lovable (and it appears many people do), start by looking in the mirror. Tell the girl that you see that you love her. She's worth it.