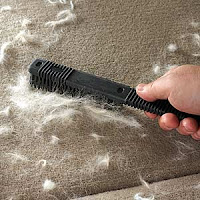 After running a few errands tonight, I figured I'd do the Jared thing and get a healthy sub at the new Subway shop at White Flint Plaza on Nicholson Lane in North Bethesda. Get a five-dollah footlong with lots of veggie-tastic goodness, and have lunch set for tomorrow, too.

Except when I walked into the very, very small shop, there was a woman with a poofy Pomeranian type dog (except bulkier, bigger) on one of the few tables in the shop, just a few feet from the meats, cheeses, fixin's, and such. Gross.

Sincere regrets to any of my friends who think it's perfectly fine to bring pooches into restaurants. I'm *really* pretty firm on this one. You bring a long-haired dog into a tiny deli and have it up on the table in spitting distance of the food? That's nasty. Dogs don't always cotton to strangers, and they don't always have perfect control of their excretory processes, either.

Let's be very clear - this was not a seeing eye dog. Not an assistance dog. This was a ball of hair getting "wuzzy wuzzy woo woo" kisses from the woman holding onto it. And one that made a nasty, aggressive, yappy bark as customers walked in. Uncool.

Look, I love critters. But I don't think I need to encounter anyone else's pet when I'm buying human food. Hell, I saw some Juicy-butted woman in slippers take her dog into Harris Teeter the other day. She got the big hairy eyeball from a manager and departed. (Hooray, management with cojones!) I may be an uptight frump, but the tiny indoor dining & food preparatin area of a Subway shop in suburban Maryland ain't an outdoor cafe in Paris. And I don't know about you, but I don't care for Pomeranian fur in my sammich.

I asked the male clerk why there was a dog in Subway. He shrugged. "I dunno. I don't care." I told him it wasn't sanitary to have a dog up on a dining table a few feet from where the sandwich components were laid out in the open air. Could he ask the patron to take the dog outside? He wouldn't look up at me. Instead, he pointed at the food and said, "The dog isn't right here. It doesn't matter."

Bubba, it does matter. It matters when a customer points out an unsanitary situation four feet from the cash register. (And it makes you wonder what the rest of their standards are.) The customer ahead of me nodded and smiled, but didn't say anything. (Of course, leave it to me to be the one to say something.) The clerk blew me off completely at that point and just asked the other customer what sub he wanted. 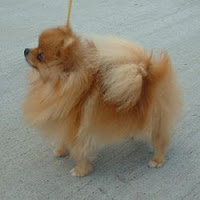 I know it may be stupid, but this Subway - a pretty new location, by the way - just lost me as a customer. I told them this as I left. And I also stopped at the table with the dog and said, "Hey, that's really unsanitary that you have your dog in here. Especially up on a table where other customers will be eating."

She had the good grace to take her dog outside at that point. But I should NOT have been the one to tell her. There were at least THREE staff members in this little Subway, and none of them had the balls to tell this woman - who wasn't even eating there (her husband and kid were - each one took his/her own table) - to take her fluffy baby outside.

Now, I know I will piss off a handful of folks who see their dogs as children and believe they should be allowed everywhere. I'm not one of those folks. We took our dog, the late, great Termite all over creation in the car, but we didn't take her inside places that generally require opposable thumbs, the use of a napkin, and the ability to indicate "no tomatoes, please."

I'm going to check with the county tomorrow about non-assistance pets in restaurants in MoCo. And I'm calling Subway's consumer hotline. Theoretically, it operates 24/7. Of course, when I called, I got a message telling me there is a "system error." That's a convenient way to avoid taking calls, no?

The cranky biyotch who ended up with chili and a baked potato from Wendy's. (Yeah, I got attacked by a squirrel at that Wendy's, but I was in the parking lot and clearly on that squirrel's turf.)

UPDATE: A call to the Subway corporate number this morning yielded a fast response. My complaint was forwarded to the regional management and the store owner. Store owner verified my story with his store staff and then with me by phone. He was pissed that his staff not only didn't do anything, but also ignored me. He's instituting some changes, some education, and putting up a NO PETS sign on the door.

The last time I got a sub at Domino's (which I liked doing because I could order it online and pick it up on the way to work) I discovered a (human) hair in it. I contacted Dominos corporate online and complained and while they did email me letting me know they'd notified the store, I never heard anything back from the store itself, and they definitely lost me as a customer as well. Needless to say, that was a sub I didn't finish.

Hairnets may not be attractive, but they sure as hell serve a purpose!

Here's one for you: several years ago, I ordered a pizza from some little place not far from Chez Merde here. When it arrived, I opened it up only to discover mold on all the sausage. I mean BIG BLUE LUMPS OF FUZZY MOLD. I just about ralphed all over creation.

I called the place and they accused me of lying. Fortunately, this was on a workday, and I called the county asap. Took pictures of the mold, etc. The pizza place called me back in a few minutes and offered me $50 to withdraw my complaint to the county. (Apparently, the county called them immediately to halt food service.) I told them "no" and they told me they were sending someone over to take the pizza away. Yeah, right! I didn't even try to get my money back. Figured it wasn't worth inviting them into my life again.

That place closed down that very week.

That is horrible. Why don't 'normal' people give a crap about stuff like this?

Sorry dog-lovers. Any animal, thing or person that can (and does) regularly and gleefully lick it's own ass is not welcome in any eating establishments.

...and it was on the freaking table! Ugh! I would have called the country there and then.

As far as I'm concerned the only time a dog should be in a restaurant is when it's ON the menu. I

Having lived in a Europe for a little bit now, I can tell you, it's easy to find a seat in a restaurant for a dog than it is for a small child. In some respects, I'd prefer that because dogs can be, if properly trained, well-heeled. Children can be, too, but these days mostly art. (God forbid we "limit their creative spirits." Seriously, a friend said that to me once when I asked her to ask her son not to run through my house like the Tasmanian Devil. I stray.) Having said that, though, most people in Europe are pretty clear that their dogs aren't a little human. The dog belongs on the ground/floor, not on the chair or table.

As for that Subway, there are so many sociological and psychological scenarios going on there, it is ripe for analysis. Let's just leave it at, good for you for saying something and good for that store owner for doing the right thing. So maybe he pisses off a "I feel entitled" dog owner or two, but what's that compared to actually staying in business?