In my hands, a faded history

It's D-Day. The Sixth of June.

Big day at Chez Merde. Lots of memories. Some good, some bad. 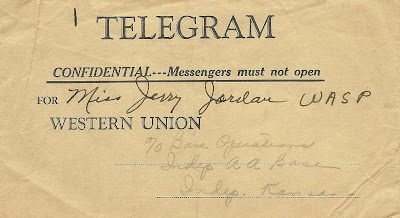 For me, the family sadness of D-Day starts a little more than a year before the beaches were taken at Juno, Gold, Omaha, Utah, and Sword. In April 1943, my mother was training to be a WASP, and her brother, a Naval aviator, was in the Pacific, flying carrier-based bombers. 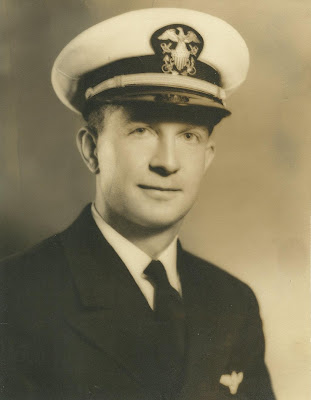 My mom's brother, Franklin
Mom had only been at Avenger Field in Texas a few weeks when she got the first of two telegraphs on the same day.

First, one came from her father: 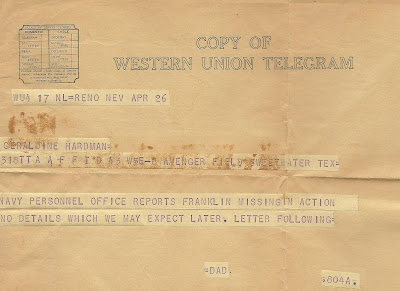 And then, another, from the Navy: 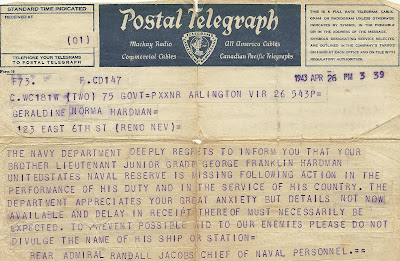 In her wartime photo scrapbook, Mom would later write:

"Telegram from Navy arrived notifying me that my brother was missing in action - found out later from other navy pilots that he was bombing Bougainville from a converted carrier (USS Chenango) based at Guadalcanal - his flight disappeared in vicinity of a tropical storm. Not known if they ever reached their target." 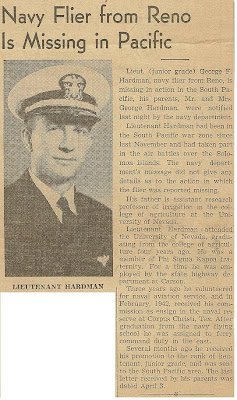 Franklin would never be found. So many men were lost in the Pacific Theater, there wasn't enough space to put all their names on the memorial at Pearl Harbor. Franklin's name is inscribed on a memorial in the Philippines. Mom wanted to see it someday, but never made it there. 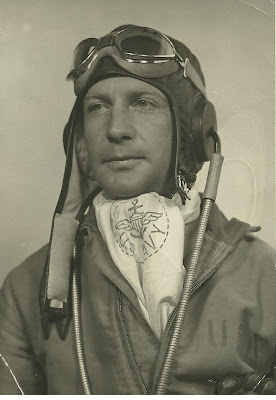 Lt. Junior Grade George F. Hardman
While serving at New Castle (Delaware) Army Air Force Base after training, Mom requested a posting on the West Coast, to be closer to her family in Nevada. She felt her father and stepmother would be comforted to see her once in a while. The military, of course, had an odd idea of "West" and eventually, in 1944, posted her to Fairfax Field in Kansas City, Missouri and then to Officer Candidate School in Orlando, Florida, where Mom met Dad.

During my parents' whirlwind courtship, Mom's beloved stepbrother Jack - a man who had already done a good amount of time in uniform - re-enlisted for military service after a recruiter came through town, talking up paratrooping. Along with thousands of other young American men, he shipped out to Northern Ireland in advance of Operation Overlord. 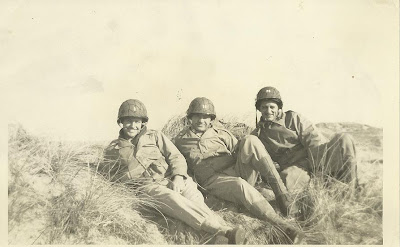 Jack Quaid (on left) with two buddies, Northern Ireland, 1944
D-Day came and went, with expected radio silence from Jack; no one expected any word from the men in France in the days just following the invasion. Back home, my parents married on June 24, 1944 on a sweltering day in Richfield, Minnesota. And less than a month later, on July 20th, Mom got another terrible telegram: 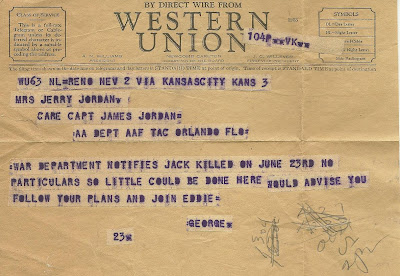 Jack had died at Sainte-Mère Église, which was the heart of the airborne operations for D-Day, with many men dropping right into the center of the town. Mom's handwritten notes in her scrapbook tell the story:

"(Jack) killed while setting up a roadblock by mortar shell a few days after parachuting into Normandy June 6, 1944."

Jack was buried at the American cemetery at Colleville-sur-Mer, but his widow had him repatriated and reburied in Reno. This upset Mom - she felt Jack should have stayed in France alongside his fallen brothers in the well-tended, much-revered cemetery not far from Omaha Beach. But we all mourn in our own way, and Jack's wife needed him home. She needed something tangible. I can understand that. 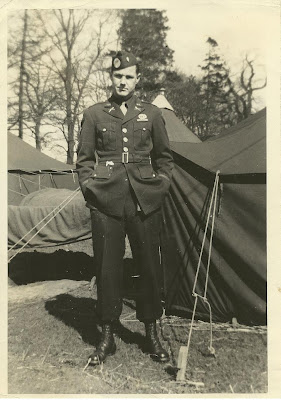 Lt. John A. "Jack" Quaid, Northern Ireland, just before D-Day
The only tangibles I have of these lives are the snapshots and notes Mom kept from a lifetime ago. I never knew them except through her words and these images. I think I would have liked these guys. Mom adored her brothers, and while I'm sure their memories became a little idealized in death and mourning and celebration, I have confidence that they were pretty damn fine men.

Rest in peace, uncles I did not know. I'm glad Mom left fragments of your stories behind for me to ponder. I wish I knew you better.

In my hands, your faded history
A stack of yellowed photographs
And crumbling Western Union words
I puzzle out how much you meant
To people I did know and love

Assembled telegrams, your faces smile
But no voices speak your story
I wonder who you would have been
Had you not been cut short by war
Now just
Fragile
Tear-stained bookmarks in a life
Posted by Merujo at 9:23 PM

Awesome post. I think WWII tends to get glorified sometimes and people forget how much of a price was paid for our victory there.

I've been away from blogging and am tenatively returning. As always from you, the most amazing writing. My mother kept a wartime scrapbook, too, with scratched (where is this) postcards and V mail and all that you show. During Memorial Day I thought of the sacrifice any young man or woman now makes by giving up their independence to serve their country. That always struck me about my father, who did make it back, just this huge portion of his life at war and in turmoil...lost youth. And the huge price, as you say, paid for our victory. A haunting post. Please keep writing.

Thanks for the good words, Chuck and Cubette! So glad you're coming back to blogging, Cube -- you write so beautifully!

I had no idea this entry was featured on DC Blogs today. Been so wrapped up in work. I need to send this link to some of my family who have probably never seen these images.