Or, When Rabid Fans Attack!

Watch [adult swim] on The Cartoon Network? No? You should! Well, at least part of it. I just don't dig anime (no offense to anyone who is into it.) Japanimation ain't my bag anymore, although I did love Speed Racer and Prince Planet back in the day. And the current GEICO Speed Racer ad made me laugh my ass off last night. In general, though, all the giant round-eye characters and stilted voiceovers creep me out. (I also don't like the whole "little schoolgirl" look. Bleech.)

But, through my friend the Atomic Editor, I became acquainted with the hilariously bizarre [adult swim] phenomenon that is Aqua Teen Hunger Force. It's a cartoon, broken down into 15-minute shows (because more than that would be Too Much), featuring a milkshake ("Master Shake" - or just "Shake"), a box of fries ("Frylock"), and a ball of ground meat ("Meatwad") that live together in Jersey, next door to Carl, their sweats-n-flip-flops wearin' neighbor. (Carl goes through a lot on that show. Flayed alive. Sucked through a giant toilet. Rebuilt with a box of medical waste eyeballs. It ain't pretty.) I can't really do justice to the adventures of the Aqua Teen Hunger Force. Some of it is funny, some of it is tasteless, and some of it, simply inexplicable. I love it. 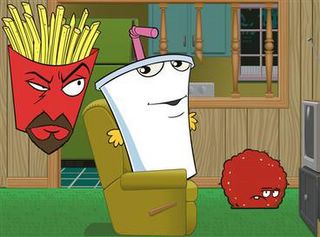 The show was probably designed to appeal to men in their late teens and early twenties - the "anything is funny" age. I'm a 39-year-old woman. Go figure. Like I said, I blame the Atomic Editor for getting me hooked on the show. He is an evil genius. Truly.

Along with laughing like an idiot at the Aqua Teens, I am also fairly amused by the friendly, conversational comments the [adult swim] folks put up on the screen between shows. Now, you have to keep in mind that one twisted pop culture freak's "friendly, conversational" is another human's "uh, uhmmm... whatever..." So, your mileage may vary. 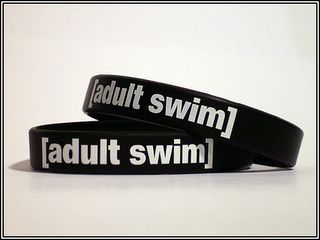 Finally, an awareness bracelet I can get behind!

Just last night, [adult swim] listed the new Sunday night schedule for it's loyal viewers. New shows were highlighted in one color. New episodes in another. But, you see, because the [adult swim] people are cool, they pointed out the specifics of the colors they used: "New shows are in Pantone 375... new episodes are in Pantone 244..." This will make the Sasquatch smile. He luvs that there grafixx designin' stuff.

So, as with any TV phenomenon in the Internet age, Aqua Teen Hunger Force and it's unlikely trio of heroes (and Carl) has generated a small army of uber fans. I am confident that most of them are normal people. Perhaps normal people who write comments like "ATHF iz 2 k@@l 2 B 4 real, d@@d!", but, still, fairly normal.

But some of them are Rabid Internet Fans. And they should be avoided. Beware these people. They are unhinged.

I became familiar with the unpleasant nature of the Rabid Internet Fan back at the end of 1998, when I was briefly unemployed for the first time. Back then, I loved the show Homicide: Life on the Street, for it was "the best damn show on television." Tom Shales called it "appointment television" - you made sure you found the time to watch it. (Tom was right.)

Homicide was filmed in Baltimore, a scant 30-minute hop from my home in the DC 'burbs. One day, faced with the prospect of sleeping until noon and floundering in depression, or getting my ass out of bed and doing anything, I ended up driving to Baltimore to see if there was some filming going on. I'm fascinating with the creative process. (Guess I shouldn't have squandered that theater scholarship, huh?) I was totally thrilled when Steven Spielberg was filming "Minority Report" in the Reagan Building here in DC, across the street from my former office. Some of my colleagues were obsessed with seeing Tom Cruise (who was friendly, nice, and short, but sure didn't ring my bells), but I was thrilled like a kid at Christmas to be able to stand a mere 15 feet behind Spielberg and watch him direct. I'm pretty sure I missed almost a whole day of work, just observing him do his thing. It was Very Cool.

Back in '98, when I made that first aimless trek to Charm City, sure enough, down in Fells Point (where hip Baltimorons go to get loaded and puke into the harbor off the sides of the water taxis), filming was in progress. As time wore on, I went up to Baltimore periodically, watching the filming, meeting some of the crew and the actors. I never went up to bother them, but we started encountering each other at the coffee shop, which led to random chats. It was a "I've seen you a lot, who the hell are you?" thing that became more and more friendly. I didn't get shoo'ed away when filming started. I talked to extras about what they did in "the real world", when they didn't get paid peanuts to walk here and there in the background. During that last season, I am delighted to say that my own bad self can be seen strolling down Thames Street in one episode. It's my best view - from the back. I had a good hair day and all my bulges are covered in a long black leather jacket. Amen.

A couple of the lower profile actors bartended in the little pub across the street, sometimes for fun, sometimes for charity. I liked talking to some of them. Just nice humans. I imagine they probably can pick up the vibe of which people are scary and which ones aren't. I think I gave off the "not scary" vibe pretty heavily.

I took a picture one day with one of the actresses, Toni Lewis, on the steps of the fake police station. We were both being very goofy, both with sunglasses and huge moronic grins. I sent her a copy of the picture and imagine my surprise when I found out that the picture had been framed and added to the stuff on top of her character's desk! Hey, mom! I made it to network TV! Whoo-hoo!

It was a fun way to escape the horror of unemployment, except for one thing... The Rabid Internet Fans. Now, I'm not talking about the people who got on the Homicide Google group and wrote things like "I really like the show. It's great. I hope to see all the locations in Baltimore one day." Oh hell, those are Normal People.

Unless HBO or Vivid Entertainment is paying you.

Because I generally try to be decent to other people, I ended up befriending one of the creepy Homicide slash/porn writers who sat on the curb across from the set. She was there every time I came up from DC. At the time, I didn't know she was a slash/porn writer. She just looked lonely. I also didn't know she was stalking one of the actors and his girlfriend (who also was an actor on the show.) And, I didn't know that she was developing a gay crush on me. A little awkward, as I am straight. (I just realized how interesting it is that her weird porn fantasy/stalking thing was for one of the male actors on the show, since she didn't swing that way. Huh...)

When I detached myself from this particularly scary human remora, I remember running into said actor and his girlfriend (who used to be on one of the Star Trek series, so she's probably used to the freakier side of fandom). The woman and I had spoken a couple of times before, mostly about shopping and other mundane crap, one Maryland dweller to another. I told her, "I'm so sorry for the scary people." She told me that they'd started altering their dining locations to minimize contact. I told her I didn't blame her. Later, I tried to gently tell the stalker and some of her friends that these folks were feeling a little freaked out, and they needed to give them space. In response, I was angrily told that I had to have mistaken what I heard. One woman even told me that she'd been watching those two for a year or so, and she was sure that, if it bothered them, they would have approached her.

Riiiiight. You are the reason for restraining orders, people. Get with the program.

So, this leads me to Aqua Teen Hunger Force and it's cadre of Rabid Internet Fans. Have you figured out what's coming? I bet you have, loyal 2.5 readers! There's a group of fans writing kinky, kinky, mega sick slash about this show. Did I mention that it's a fifteen minute cartoon show... with a milkshake, a box of fries, and a ball of meat as the heroes?

I have to find a job soon. I'm really frightened by what I can find via Google...

ICK! Please tell me they're not doing this with characters from the "The Famiily Guy."

Oh, god. I hope not. I can assure you this - I'm not gonna go looking for it. Not gonna. Not gonna.