My sister, Nurse Rachet, made me a papier-mâché Greedo head for Halloween back in 1977. She used chicken wire to form it and gave it great eyes by dismantling Mom's sunglasses and inserting them into the frame after painting it green. It was very difficult to breathe in it, and I only just found out from Nurse Rachet that those were Mom's new sunglasses at the time. I blame that on Nurse Rachet probably being stoned at the time she made me the Greedo head. She did a lot of weird shit back then. Someday, when I can find the Polaroid evidence, I'll write an entry about the ginormous apple pie she made while "under the influence." It was beyond huge, oozed all over the oven, and, instead of traditional vents, she carved the words "JIMMY HOFFA" across the top. Our father was unamused. My mother had no comment. Nurse Rachet has no memory of this. I, however, have a photograph. Now, if only I could find it, dammit.

So, the New York Times reviewer says that "Revenge of the Sith" is better than "Star Wars" (that's "A New Hope" to you heathen folk). Holy crap!

So, here's the word from the Times. I'm starting to feel good about this. 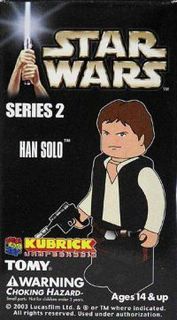 Yeah. I'm funny. I actually had to go looking on Google images for "fat Han Solo" just to use my stupid "Carbo Night" joke. I'm pathetic. I actually found a pic of a real guy stuffed into a Han Solo costume, but I realized that he weighed less than me, and I respected him too much for having the guts to squeeze large thighs and a sizeable rump into those tight Corellian pants... Unlike a tuxedo, Corellian pirate gear does NOT make any man look great.

(And no dirty jokes about the "choking hazard" stuff, okay?)
Posted by Merujo at 10:03 PM

That's a pretty freaky blue thing! I'm not a fan of Star Wars really. My friends keep 'singing' the Star Wars theme thing though, so it's hard to avoid. ;)