...the Perils of an Internet Presence

A while ago, I thought I would be able to start a small Internet business. It was textile art-based, and, possibly, ill-conceived. The truth is, when my mother's health started to fade and I started to feel ill (not knowing that I had a medical condition myself), I just wasn't excited about it. The website is still out there, hosted on the space provided by the Sasquatch's e-mail account, god bless him. There it sits, with my theoretical products and stories of my travels in Russia and Central Asia. There's a picture of me on the site - I'm standing on the bank of the Moskva, across from the Kremlin (right by the Kinoteatr Udarnik) smiling and wearing the worst haircut in recorded history. 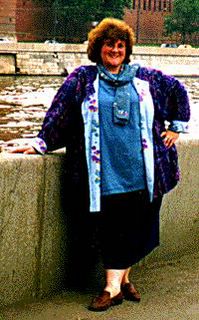 Pardon me, ma'am, but is that a squirrel on your head???

It's not a particularly attractive photograph. Hell, it's so fuzzy, you can barely tell it's a woman. (Hey, check out the big guy in pastels with the squirrel on his head!!) Yet, somehow, it has garnered me a worldwide fanbase of uber-creepy guys. Fat fetishists. Scary-ass men who like to write me e-mail and offer up very personal statistics and want to know about any scars I might have and what is your bra size, please?

For some reason, there appears to be a pocket of overeager fans of the rotund in Scandanavia. I get the occasional bizarre e-mail from Sven or Bjorn wanting to meet me. One enterprising and particularly unsavory man from the Netherlands figured out my phone number and called at 3 a.m., asking some deeply personal questions. I said I was not "Merujo" but her roommate. Merujo was deceased. She had been eaten by rats. (That, by the way, is my standard answer when people are not to be found. They have been eaten by rats. Again with the rodents. Oy vey!) Hey, don't ask for logic when a heavy breathing Nederlander calls asking about hairy legs and the kilo weight of a single breast in the middle of the night!

Now, once, a loony American sent me not only an e-mail, but a photo of himself. His name was Thor. Thor sent a boudoir shot of himself, stretched out on a canopied bed, with a mural of the pines of Rome in the background. Not even an intensely soft-filtered lense could hide the fact that Thor was sporting some, uh, "pine" of his own. (I laughingly dubbed it "Thor's Hammer.") Thor was a tall Scandahooligan-American, and apparently very certain that I was looking for some hot Swedish love. He was mistaken. Amusingly enough, he provided me with his location... turns out, he was in my relatively small home town in Illinois, where friends of mine know all the Svensk folk in town.

I forwarded Thor (and his hammer) to some of my friends, and, in response, I got one message reading, "Oh dear lord, I think I went to Lutheran summer camp with him!" I let Thor know he might want to be a bit more discreet with sharing his gifts, that we were from the same town, and we might know some people in common. That was the last I ever heard from him.

Tonight, I received e-mail that opens up a whole new continent to me. Scandanavia, step back! Africa is in da house!

PRETTY LADY! I HAVE SEEN YOUR VISION OF FACE. I WANT TO LOVE YOU! I AM AFRICA MAN. I AM BIG TO PLEASE YOU! I AM MANDINKA WARRIOR FOR YOUR LOVE! I WILL BE AFRICA AMERICA MAN WITH YOU. AMERICAN WOMAN LOVE ME! I KISS YOU!

Wow. Now, that's some powerful prose. I didn't know there was a Mandinka warrior for my love out there. I would have felt better had he closed with "BURMA SHAVE!" 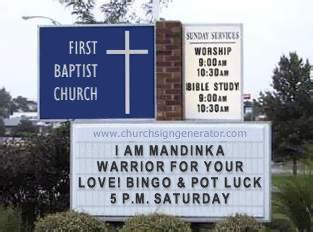 And nice guys, Mandinka warriors or not, don't hit on women in screaming capital letters in response to fuzzy Internet photos.

These unusual and mystifying "gifts" of yours continue to astound and intrigue me.

First the astonishing Raging Rodent Phenomenon and now the Foreign Fetish Men... Well, "mostly" foreign - with the exception of the "happy to see you" guy that just so happened to be from your old home town - THAT in itself merits it's own Twilight Zone episode!

I have a couple blurry pictures out there in cyberland myself, but have received nothing... no fun stories, no late-night callers, no mice at the foot of my bed. I epitomize all that is boring and tepid.

I absolutely LOVED the Church Sign - how did you do that? Clever and cunning... and oh, squirrel hair? I had that hairdo, but I thought I was having a "good hair" day... Now you tell me... why am I always the last to know?

Thank you again for making me laugh! Job well done.

You must visit the Church Sign Generator and you, too, can create profound and profane messages to share with the world. I make and send tasteless ones to my sisters. They love 'em.

HAHAHA!
aah yes, i used to have wierdo attractor secret sirens of my own...but that's a whole other story. I am well aware of the Larger Love. First off, I'm pretty petite, but when I moved up to binghamton, the only well paying job I could land was as a manager of a Lane Bryant. Ok, sure.
I ended up at one point being in charge of Cacique, which is their bra and panty line. Ok. Everyone needs to get in touch with their inner goddess, I'm down with that.

And yeah....It was an education.