The Sasquatch has just reminded me that I have actually been to THREE sci-fi conventions, and not just the one where a friend and I got the giggles something fierce over the people who were absolutely certain that they'd been probed by aliens. 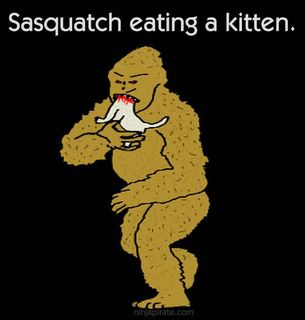 Apparently, not just for breakfast anymore...

The other two conventions: a Star Wars event in New Jersey (where we met Jeremy "Boba Fett" Bulloch, who was very, very nice, got blown off by angry little person Kenny "R2-D2" Baker, and refused to pay the fee to get an autograph from Dave "Darth Vader" Prowse) and a Star Trek event in Virginia. 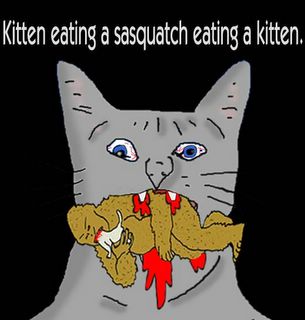 Just plain wrong. (Not that the first image wasn't really, really wrong, too!) 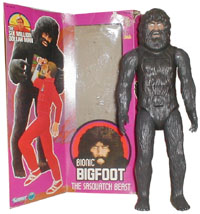 While elusive in the real world, the Sasquatch is easily identified
in sci-fi convention vendor rooms by his bright pink box...

Not that he had to drag me kicking and screaming to attend. I was a willing participant. The one in New Jersey was made even more memorable by the fact that we stayed with my sister Shopaholic and her husband Sir Swears-a-lot. I think the Sasquatch was amazed by the amount of profanity my brother-in-law could pack in on one weekend. Sadly, I was less amazed. 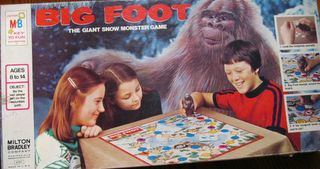 The Sasquatch digs board and word games. He especially likes Facts in Five
and Balderdash. Here he is seen sizing up the cranium of this little girl to see
if she is smart enough to partner with him. Damn elitist Sasquatch!

I'm more amazed by the fact that I totally forgot these two events. I can't blame this on my brain being full. I swear, my gray cells are atrophying after nearly two months of nothingness. I have to find a job and start eating more fish. 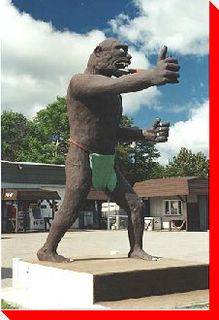 After a traumatic mishap with the Bethesda On the 8's Trolley,
the Sasquatch has taken to hitching rides to work.

I considered going to DragonCon with the Atomic Editor last year, but it sadly didn't work out. I could already see the handwriting on the wall re: my job, and I started to get twitchy about spending any money on unnecessary travel. But, dammit, James "Spike" Marsters was there with his band! I really wanted to see the hot vampire dude, but, it was not to be, cherie. Sigh. 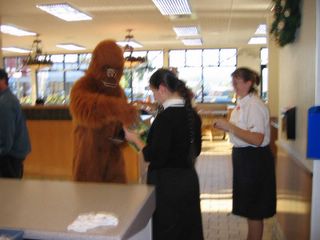 Security is tight in Washington these days. Here the Sasquatch passes
through security at his place of employment. He has an enormous, pretty,
bright green ID he designed himself. For he is The Sasquatch: Graphixx Designer!

Maybe this year. Who knows? A lot depends on getting a new job. Fingers, toes, and eyes crossed.

For now, my thanks to both the Sasquatch and the Atomic Editor for being attentive to details in my sloppy entries. To the Sasquatch, today I say: dude, you make the corrections... I just announce 'em. ...as colorfully as possible...
Posted by Merujo at 4:40 PM

I'm surprised we weren't chased out of that room, as I'm sure our laughter was quite audible. Everyone was so earnest.

Omigod, no kidding!! Chased from the alien symposium like Frankenstein from the village. I'm sure at least one of those people probably had a torch in their trunk...

All I can say is "WE ARE THE FOLK SONG ARMY!!" (This will be solely amusing to you, MEB.)

After my laughter and tears, all I can say is: That post ruled.

Oh dear. It really is a miracle that we weren't chased out of the concert hall by a mob, screaming "nekulturny!" as they ran...

And thanks for the compliment, Sweet Ninja Peeps. I am delighted to share Sasquatch Joy with everyone. The Sasquatch himself was amused, but I imagine creative blog retribution will be headed my way eventually. :-)