Just wanted to share this with y'all. This is potentially the scariest place in Rockville, Maryland: 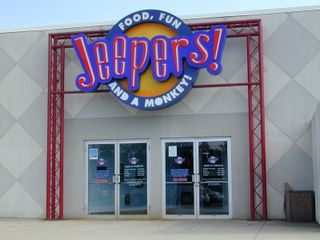 I've never been inside (and I'm not going in, thanks), but I believe this is some Chuck E. Cheese rip-off. It's their tagline that disturbs me... 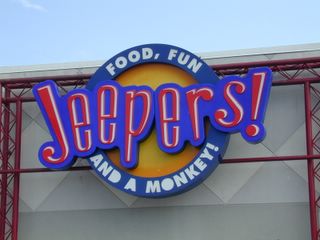 Food, fun, and a monkey!

It's the monkey part that bothers me. I'm praying, for the benefit of all, that it's actually a bored teenager in a monkey suit and NOT a real monkey, ready to bite you and pee all over your pizza. Nuthin' says, "Happy Birthday, Li'l Jimmy!" like a trip to the ER to start that agonizing series of rabies shots!

At the front of this large, prison-like structure, there is a glassed in area with a spinning, "Scrambler" type ride. I can only imagine all the heaving going on after a bunch of 10-year-olds, gorged to the gills on pizza and buckets of Pepsi, are set in a rapid spin cycle, complete with blinking lights and loud music. (If you're stuck at the stoplight, you get to hear the thumping Britney Spears. Yippee.)

Pity the poor teenager in the monkey suit. You know he's there with the mop and bucket once the kids are out the door.

Interestingly, the Sasquatch and I saw a man urinating in front of Jeepers one evening. This, in of itself, is not that remarkable in the city suburbs on a weekend night. It's the fact that he was walking and urinating at the same time that stuck in our minds. His forward motion meant that he kept walking into his own urine stream. We considered stopping and suggesting he consider walking backwards, but thought better of it.

When in Rockville, do not disturb the urinating men or the monkeys at Jeepers. A mantra to live by.

We had one at the mall in West Nyack back in the day and it always scared me. It was because of the goddamn big monkey statue that you saw when you walked in. It was inches away from me with that FACE... that and the roller coaster are the only two things I remember about it. Of course, now I miss it and wish it hadn't scared me.