I know y'all must have at least one friend like the K-chitsa. It may be months in between our phone calls, but within five seconds of the phone being answered, we're completely in sync and laughing ourselves silly. The K-chitsa and I both did Russian Area Studies at Macalester College in St. Paul, Minnesota. We made it through Russian classes with the Kinky Finn and Maria-Migraine and George the Scary Guy Who Hit on the Undergrads, and we lived in the lovely, decaying Russian House, on the other side of campus from the dorms. (Once, we annexed the eastern half of the German House, across the alley. The German House people were not amused.)

K. graduated the year before I did. She went off to do the grad school thing, and I eventually went off to work in Moscow, at the American Embassy. I envy her advanced education, but I know I wouldn't trade my time in Moscow for the world.

K-chitsa is one of those damn lefty Canadian types up in Toronto. I haven't seen her for ages now, but that really doesn't seem to have any effect on our friendship. I think the last time we saw each other was at the nuptials of our friend Randi. (That was a trippy weekend and requires its own entry, for sure.) And that was a zillion years ago now. Before that, we saw each other a couple of times when she was the PhD research goddess in Moscow and I was swinging through on business trips. She and Randi (who was also doing her PhD stuff) would come over to my hotel room, we'd get plastered on cheap Russian champagne, order room service on my generous per diem, and watch bad pay-per-view all night. Good times, good times... 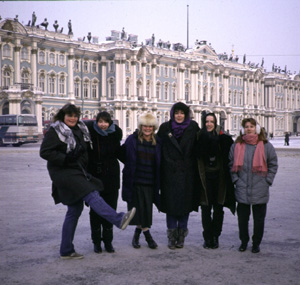 K-chitsa, Randi, and the other usual suspects at the Winter Palace in St. Petersburg. I was not there. I think I was living in London then...

It bums me out that I haven't seen the K-chitsa for so long. I hem and haw over flying up to Toronto (which is currently a financial impossibility). When I finally get a new job, I will commit to getting my ass up there. This will require me finding my passport, though, and that could be quite the task. I have no idea where I last saw it...

The point of all this? Today is the K-chitsa's birthday! Whoo-hoo! Many happy returns of the day, chiquita! If I understand correctly, Canadians celebrate with human sacrifice, no? Choose wisely! May I recommend Celine Dion? She would certainly count as "Canadian content" and we'd be very thankful down here, for sure.

If you can read that, thank a Russian teacher. If you can't, I just said "The dog barks at midnight..."
Posted by Merujo at 1:14 AM

and what's wrong with those damn lefty-type canucks? huh? ;)

it's wonderful to have friends like that, the kind that no matter how long it's been since you last spoke, it's like no time has passed.

I love them lefty-type Canucks! I look forward to observing them in their natural habitat someday. :-)

And yeah, it is great to have friends like that. It's always a pleasure when we actually do reconnect.