Meet Maureen Faibish. Maureen was very worried about the behavior of her two mating-minding pit bulls. She thought they might be a danger to her 12-year-old son, Nicholas. Smart woman, that Maureen.

So, on June 3rd, when she decided to go run errands, instead of taking her son with her, so he wouldn't be alone with the horny anger-beasts, she shut him in the basement. Good mommy that she is, she even propped a shovel up against the door so he couldn't get out and told him to stay there until she got back. Now, where I come from, the only times moms shut their kids in the basement with a shovel against the door and an admonition to stay put is when there are zombies attacking the house, and mom is running to the truck to get the shotgun or the cell phone or the pitchfork or great-great-grandpa's Civil War sword or whatever.

Apparently, Maureen is a little light in the grey matter and the thought of putting the dogs in the basement had not crossed her mind. Hmmm... Let's see... On a summer day, let's stick the 12-year-old with opposable thumbs down in the basement, and leave the dogs - who, unless really gifted, probably can't open doors - to wander the house.

Long story short: Nicholas got out of the basement and mommy's pit bulls killed him. 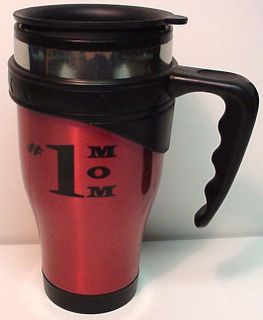 Maureen Faibish - this mug's for you!

Read more at CNN.com. My favorite quote from Mommy Most Negligent: "It's Nicky's time to go... When you're born you're destined to go and this was his time."

Yeah, sure it was his time. Destiny moves at a faster pace when aided and abetted by stupid people and hormonally-challenged pit bulls.

I live for the day when pit bulls are completely banned as pets. And when stupid people can't have kids.
Posted by Merujo at 1:17 PM