Putin is a Moron (Warning: Cannibalism)

This post has received a high number of hits recently, as people have searched for "Putin" and "cannibalism" on Google. Additionally, this post has been linked on a website/discussion site for issues in Ukraine. Welcome to those coming from those sources. This post is more political than most you will find on my blog. It also discusses something that distresses me greatly within Russian culture. (Be certain, there are plenty of things in American culture that bother me, too.) But, as someone whose life/job was focused on the former Soviet Union for many years (including several years spent living in and traveling through the region), I have strong opinions on this and some experiences that are unique for an ex-pat. And, in all sincerity, I don't like Putin. Then again, I don't like Bush, either. :-)

If you want to read a more typical post from this blog (with some heartfelt and historically interesting text), I invite you to read "My Mother Had Wings" about my mom, who was a pilot in WWII. Thank you for visiting. Best wishes to you all.

Original post begins below:
I've never hid the fact that I intensely dislike Vladimir Putin. When I look at him, I always see the dark, dark KGB shadow he throws, and it gives me the creeps. No matter the cut of his suit, he's an old-school autocrat who uses thugs to intimidate rivals, tear down campaign posters, and generally scare anyone who might have a differing opinion. I find him vile. He's Soviet. I'm glad that my four years of living in Russia did not fall on his watch.

And, wouldn't you know it, my least favorite world leader has opened his mouth and rammed his Bruno Magli right in it. This time, it was during a press conference with Tony Blair. After discussing aid for Africa, a reporter questioned Putin on Russia's human rights record. Said Putin: "“We all know that African countries used to have a tradition of eating their own adversaries. We don't have such a tradition or process or culture and I believe the comparison between Africa and Russia is not quite just."

As this article from The Sun reminds us (I can't believe I'm using an article from The Sun as a reference, ugh) Putin is the next president of the G8. Grrrrrreat! It'll be super to have him leading our happy little troop. Always good to have an autocratic racist in charge!

I may have said this before, but if I haven't, there is a MASSIVE problem with racism in Russia. Waaaay beyond anything you might encounter in the United States. Dealing with Russian racism requires a post all of its own. It's vile and shocking how common it is among what we might consider "normal, educated" people. (I remember going to lunch at the home of an artist in Moscow. He and his friends casually started talking about the high number of "monkeys" in the city, referring to African college students. "Of course," the artist said to me, "Those are African blacks. American blacks are different. They're almost human." Lunch over. Everything over. And he just didn't understand why a white American would be offended, which is sad, pathetic, and a lot of other really rotten stuff.)

Like I said, that requires a whole post on its own. (And I will have to take a deep breath and try not to get really, really angry when I write it.)

For now, let's focus on the cannibal aspect of of Vlad's comment. Gosh and golly gee, Mr. Putin, beyond correcting your basic major error of painting all of Africa as having a cannibal tradition, I think you should take a moment to reflect on Russia's long history of cannibalism. Didn't know about it, dear loyal 4.5 readers? Oh hell, yeah! And, duuuude, I'm not even talking about Andrei Chikatilo, the cannibal serial killer. This is more... basic... elemental, societal cannibalism. 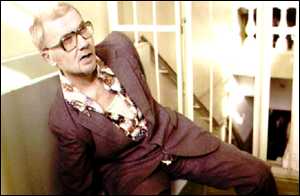 You see, some Russian people survived the dark days of the early 20th century as cannibals. There are some spectacularly gruesome photographs of this - an old couple with body parts for sale at a market... a man pushing a cart, from which arms and legs dangle. (Some of these are on Google images, if you know how to search - I'm not going to spoil anyone's lunch/dinner/day by linking, though.) In the days of the Soviet Union, it wasn't unusual to hear of prisoners, starving in horrific conditions, cooking up their fellow convicts - in fact, I remember reading about more than one case in Pravda.

Heck - when I was a student in Krasnodar, down in southern Russia, we had a "co-op" cafe (one of the first generation of privately owned businesses under Gorbachev) that was serving up more than beef and lamb in their shashliks. Pravda covered that story, too. Some cab driver wandered into the kitchen, looking for his fare as the meter ticked on, and discovered the dish of the day laid out for processing.

The scariest part of that? Before this came to light, several of us had eaten there. Unknowingly, we naive American students momentarily may have been cannibals.

Actually, I try not to think about that very often.

In fact, this is the first time I've thought of that in a long, long time. (And lunch will likely be a salad today...) It's beyond revolting. It really is.

Okay... like I was saying... it happens more than you'd want to think in Russia. I understand the need there was in WWII, when Leningrad was under siege. Decent, normal people had to eat their dead. It was a basic survival need. Horrific, but needful.

But, in other cases, it's just a way to buy booze. Think I'm kidding? There's a tradition among Russian drunks - the troika. You get three people together and they go on a joint bender. Sometimes, though, the moolah and the booze runs out and people get murderous - and hungry. For meat. One heartwarming case I recall back in '91 or '92 featured not only our troika of drunks, but the enabling mommy dearest of Drunk #1. When the vodka ran out, Drunk #1 and Drunk #2 slaughtered Drunk #3. The local market had been short on meat for quite some time, and so, Drunk #1, being an inventive soul, got his mom to cut Drunk #3 into some nice cuts and took the fresh flesh to the market. She sold it, the remnants of the troika returned to their carousing, and Darya Homemaker complained to local authorities about the quality of pork in the market. (Eeeeesh.) A handful of arrests followed.

For your further edification, may I direct you to this edition of "Martin the Satanic Racoon", by Gabe Martinez, which I think does a lovely job of backing up my super terrific funtime stories.

Pot, kettle, black, Grazhdanin Putin.
Posted by Merujo at 10:01 AM

"The scariest part of that? Before this came to light, several of us had eaten there. Unknowingly, we naive American students momentarily may have been cannibals."

A tremendous piece of prose! Well met! Now that I found you, I'll be back to read more.

Welcome to my world! It's a strange place, but all are welcome!

you are big liar!!!
It is all bullshit!!!
I from Russia and I sure that my country is best.
If anyone want to know why?
I can to prove.
mail to: grech_a@mail.ru
p.s We are the champions my friends(to russian people)

While you are welcome you to comment here, you must mind your manners in my comments, my son. If you speak abusively, your comments will be deleted.

I'm not a liar. And I lived in your country for several years, thank you very much.

And, if you really think it's all "bullshit" please explain the mother and sons who ATE their neighbor in Rostov-na-Donu earlier this month. AND explain why the Duma had to pass a measure to tone down violence on Russian tv after the recent broadcast of a documentary on cannibalism in Russia?

Can you please send me links of those gory pictures that you said you wouldn't post.
my email: sexy_stoner_gurl@hotmail.com

I know what your thinking but I am not a sicko, I am a 18year old high school student doing a history project on cannibalism in Russia during WWII and I would like to shock my teachers with some gory pictures

I found this post after searching google for russian cannibalism. in the last 2 months I read in the newspapers about 4-5 cases of cannibalism in Russia. I am wondering..is there some experiment going on or what?what could induce this urge to eat humans in russia in the past 2 months?