Oh, if only I had several grand (and lived in LA) - Kevin Smith is auctioning off a BBQ dinner at his Los Angeles home for hurricane relief. Kevin Smith is a guy I think I could just hang with. We could talk Star Wars for three hours, and I'd be very cool with it. (Of course, at some point, I'd have to go all fangirl and tell him how much I love "Dogma.") Smith is also auctioning off other goodies, too, so check it out. 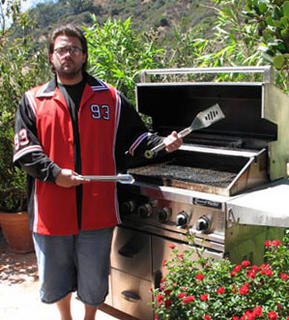 I'd kill to barbecue. Seriously. God, I miss it.


Now, if Brad Pitt auctioned off a guided tour of his restored original California Arts & Crafts bungalow, I might have to sell my soul to some upper level demon to win that sucker. Yes, I am the only single woman in America that wants Brad Pitt for his bungalow. (And no, "bungalow" is not a euphemism for his package. I genuinely covet his vintage home...)

Kathy Griffin, late of Bravo's "Kathy Griffin: My Life on the D List", is auctioning off a ticket to join her and her "main gays" for dinner and a Kelly Clarkson concert at the Aladdin in Vegas this Friday night. The ticket was for Kathy's husband, Matt Moline, but he has traveled to Louisiana to help in relief efforts. The auction is up to $5,300 tonight. Good goin', bidders! And good goin', Matt, for going down to do some good work! 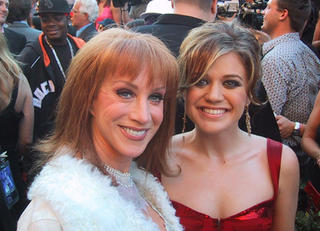 This, by the way, is the photograph that Jay Leno mocked when
Griffin was on his show (as seen on the D List.) He was awfully cruel.


Maybe I should make up some "weird Soviet crap" mystery grab bags and sell/auction those off on eBay for Red Cross moolah... I'm afraid no one would want to attend a bbq in my yard (if I had a yard - and it was legal for me to bbq here in Montgomery County) and the only person who is willing to attend concerts and eat dinner with me is the Sasquatch - and that's because it's in his "friend contract." He has no choice.

Time for bed. It's gloriously cool out and the crickets are at full throttle. Mighty fine snoozing weather, indeed.
Posted by Merujo at 1:07 AM

I don't think that is the photo Jay mocked. The one that made Kathy cry was of her with Carmen Electra.

Oh - mucho gracias for the correction. You can tell how long my attention span is these days...