Note to Self, the Russian Gourmet Edition

I know better. I really do.

I speak Russian. In fact, I speak it well. Years ago, people would ask me when I immigrated, and, silently, I would beam. That's pretty cool. But, after more than a decade away from Moscow living, a possess an atrocious American accent. Eh, feh. I am an American. I guess I'll just have to own that.

But when I go into a Russian grocery store, accent be damned. I should just speak the tongue I know so well. Sometimes, though, I wuss out. I get lazy and just speak in minimal English rather than go through the ritual questions of "Where did you learn to speak Russian so well?" or hear the backhanded compliments like, "Most Americans just can't speak Russian that way." Or the insistence that I must have "russkaya krov'" - Russian blood.

So, today I wussed out. I took the low road and only spoke English, while everyone else bantered in quick, comfortable Russian. I decided to get small containers of fresh salads, vinagret, a deep purple concoction of beets and potatoes, and adzhapsandal, a wonderful mix of stewed eggplant, tomatoes, onion, and spices. Really tasty hot or cold.

Next to these was a large bowl of spicy, marinated carrot salad - a dish that moved from the Korean markets of Central Asia to Moscow and St. Petersburg. Very tasty, and, theoretically, easy to prepare, so I didn't buy any. But it really looked good.

"Would you like to try some carrot salad?" The clerk had filled a spoon high with a sample for me, which I gladly took.

Two points to keep in mind for my next trip to this store:

You see, the word "herring" sounds a lot like "carrot" with a Russian accent. And sunglasses just make you think you're getting a big spoonful of pale carrots.

One vile mouthful of cold pickled herring salad later, I was wishing for death.

I hate herring. Vile little fish. A friend of mine just said to me, "Herring is bait for real fish." She's from Alaska. She knows Real Fish.

Diplomatically, I ate my mouthful of herring while the clerk told me how easy it was to make at home. I told her that I'd have to consider buying some on my next visit. I'll just take my eggplant and vinagret today, thanks.

I spent the next five minutes outside the store trying to control the dry heaves and sucking down a diet Coke from Jerry's Subs next door, in a failed attempt to remove the fishy flavor from my mouth. I think I'm still trying to de-herring myself. 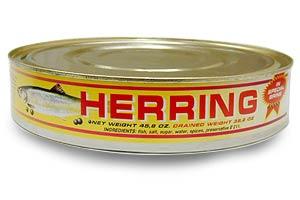 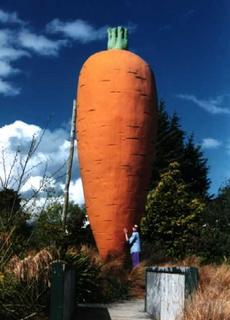 Carrot. Herring. Herring. Carrot. (And you have to understand, with a Russian accent, that's KEHrot and KHERing. So, it's easy to mess up with a lazy ear.) In Russian, carrot is морковь (morkov'), and herring is сельдь (sel'd'). Not even close. No possible error in hearing the difference in those suckers.

Lesson learned. I will not be a language weenie again.

And I've consumed my last herring for this decade, thanks. Once every 10 years = more than enough bait.

Update: That night, and throughout the following day, I suffered the miserable ill effects of herring salad food contamination. That was evil, pure and simple, from the eighth dimension - and a dirty kitchen, I'm guessing. I'm off fish (tuna even) for some time to come...
Posted by Merujo at 5:33 PM

Oh, sounds nasty! They do seem rather similar words. I'm not the biggest fan of fish myself, only the battered kind you get with chips!

Oh, fish and chips... chips with vinegar and salt... chicken and mushroom pie with chips...

I miss eating fish and chips, standing by the Thames, in a light misty rain.

Steak and kidney pie at the Members' Refectory...

I think I said that right.