I am but a slow-moving slug 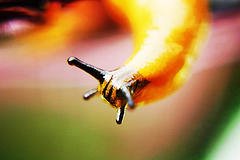 It's true. I have been quite the slug of late. My apologies. I had a heck of a nerve jangling few days, with my third interview for a nonprofit job. (I should know my fate early this week.) And being a giant, shrieking stress monkey just takes it out of me. I was feeling system-wide distress before the interview, and then fell into this "I could sleep all day" de-stressing slump once it was over. I simply became coma girl, and the creativity drained straight out my toes.

However, I'm getting my second wind now. I had to write something tonight, as the Sasquatch gave me good-natured crap about my last post merely being a lame "estro-fest" of drooling over Hot Gondorian Sex Machine Aragorn, Son of Arathorn. (I pointed out to him it was really a post about getting weepy over hobbits, but he ignored that aspect.) So sue me. I'm a chick. A straight chick. I'm gonna get all goofy over the hot, filthy fantasy guys now and then.

And now, the portion of the entry that will bore people who dislike the "what I did today" type of blog entry...

Today, I escaped DC for the afternoon with the Sasquatch and the Alasko-American. We hit the road for Baltimore, America's leader in: 1) teen pregnancy; 2) condom sales - apparently, somebody needs some instruction on the proper use of said items; 3) adult illiteracy; and 4)VD! Yes, it's a happy place, that little city where, at the twilight's last gleaming, our flag was still there, inspiring the rewriting of a badass drinking song.

Our first stop was the grotty, but hip Hampden neighborhood, home to all sorts of little funky junk, antique, and furniture shops, a few cafes, and the fringe-y, funky, freaky Atomic Books. If you want a book about a fetish, a medical oddity, pierced things, or any other odd topic, you're likely to find it here (or available from their equally odd distributors.) John Waters likes this joint, as evidenced by years of signed holiday greetings (some of them pretty grotesque) that festoon one wall of the store. 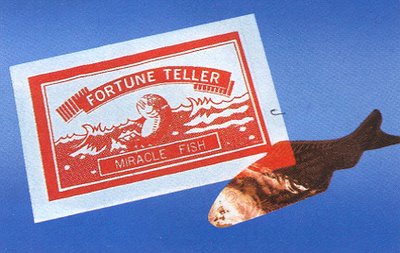 I was excited to see a small basket of fortune-telling Miracle Fish next to the cash register. Remember Miracle Fish? They're little pieces of flat, red cello plastic, shaped like fish. You place the fishie in the palm of your hand and it moves (through the wonder of your body heat), giving you a shape that you must match up against the chart to determine your fortune.

But, in my continuing efforts to be frugal in the face of utter financial failure, I passed on the fishy oracle. The Sasquatch and the Alasko-American both purchased books both interesting and odd. (The Sasquatch once purchased an L.A. detective's crime scene book - vintage "L.A. Confidential" era Los Angeles - at this store. That particular volume has the unique reputation of being the only book to ever make me queasy enough to faint. Looking at the gruesome pictures one evening, I almost passed out face-first into the back of Mr. Squatch's futon sofa. Unsurprisingly, I haven't asked to borrow that book from him...)

We strolled down the block to Cafe Hon, a Baltimore landmark that is supposed to have all the kitschy warmth and good home cooking of a Baltimore home. Our experience there, sadly, was sub-optimal. In our party of three, I was the only person who actually got what she ordered. We all wanted their brunch egg casserole, which was to come with potatoes, fresh fruit, and a muffin. First, they ran out of muffins - would we be willing to take bagels? Fine by us. Then, they ran out of the egg casserole with ham. Would the Sasquatch be willing to take the vegetarian option? Sure.

Wait. They ran out of bagels. How about English muffins? FINE. WHATEVER. BRING THE DAMN FOOD.

The waitress appears with food for me and the Alasko-American, but not the Sasquatch, who meanwhile has been quietly drooling over the creamed chipped beef served to the next table. Again the waitress returns, with an English muffin for me, and two plates of cold white toast. Sorry, they ran out of English muffins. Will toast do? (We really did feel sorry for the waitress. It wasn't her fault.) At this point, ready to chew off his foot, the Sasquatch asks for some chipped beef, since it appears they may have run out of eggs in the damn kitchen.

End result - we ate. But we won't be returning to Cafe Hon for any Baltimore hospitality anytime soon.

We wrapped up the afternoon with a visit to the American Visionary Art Museum (AVAM.) What is "visionary art" you ask? Well, according to the museum's website, visionary art is: "art produced by self-taught individuals, usually without formal training, whose works arise from an innate personal vision that revels foremost in the creative act itself." Outsider Art.

The museum itself is compact, but the galleries are spacious and the art is sometimes funny and whimsical and sometimes deeply sad and disturbing. One artist, haunted by the deaths of beloved relatives in a trailer fire (the door expanded with the heat and could not be opened), paints and decorates old doors. Another spilled out stories of his hateful, racist neighbors in large, bold words splashed in black on stark white canvas. Each of his pieces was accompanied by a spindly wooden devil, a thin red figure inexplicably swathed in a bright blue scarf. Apparently, the devil wears 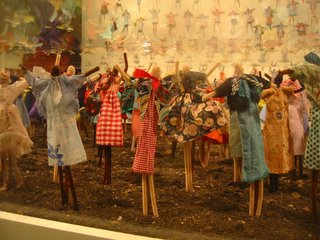 I was really taken by the room filled with pipe cleaner figures, fashioned by former lawyer Linda St. John, a woman who has created words and paintings and thousands of tiny pipe cleaner women as a way to exorcise the demons of an abusive, impoverished childhood. I want to read her memoir, Even Dogs Go Home To Die, but I'm afraid it will be too intense for me at this point. I'll wait a while before I tackle that one.

These ladies, by the way, are some of St. John's 100 Dirt Yard Girls, the centerpiece of her room at AVAM. The girls are crafted from pipe cleaners, cloth, plastic, lint, sticks, burlap, string, and paper. I wish the museum store had sold a poster for her exhibit. I would have loved to have a wall of her "girls." 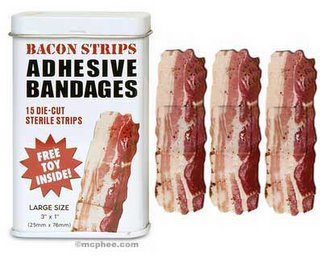 By the way, the museum store was a total trip. It's a mix of original art, traditional museum shop goodies (books, cool paper products, neat-o branded souvenirs), and, more or less, as the Sasquatch put it, the contents of the Archie McPhee catalog. It was pretty awesome. I should have bought some of those bacon bandaids. (They had them at Atomic Books, too.)

And, wouldn't you know it, they had Miracle Fish, too, right at the cash register. I think I should have bought one. I think someone was trying to send me a message.

But the very best part of the museum? They have a working photobooth in the basement! I am a total sucker for photobooths. I especially love b&w booths, but the color ones, with their tendency to produce oddly tinted results, are a riot, too. The Sasquatch, the Alasko-American, and I each took our turn in the booth. I look white trashy, the Alasko-American was caught off guard as she tried to lower the seat in the booth, and the Sasquatch looks alternatively like he's been drugged and he's being goosed. Hopefully, all this silliness will be scanned in for online humiliation.

At the end of our visit, a wedding party was arriving for a reception in the museum's stylish 3rd floor cafe. The bride looked clam-happy in a retro, cocktail-length gown with a big crinoline. She wore bulky cat glasses and had her hair in a dipty-doodle, flip-at-the-chin style. The groom matched his lovely lady in retro hipness as they took photos in the museum's garden. As the bridal party assembled, my companions headed to the museum's second building while I, slightly gimpy and walking with my cane today (lower back pain is eeeeevil), hobbled to the ladies room, down past the photobooth. 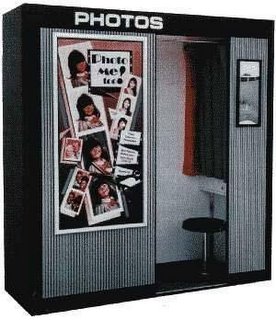 While I was staring at my makeup-less face and less-than-lovely locks in the bathroom mirror, I was unfortunately privy to an ugly argument between a woman and her boyfriend out in the hall. He was cruel and cold, he wanted no part of her anymore, and he abandoned her there, in the museum basement, as her sobs echoed in the hallway.

I found her crying in the photobooth.

She was dressed to the nines and quite lovely, even with her red eyes and blotchy face. I talked to her for a few minutes as her tears dried and her hiccupy breathing slowed. Finally, she said that photobooths cheered her up. I told her I felt the same way and said I'd taken some awful pictures in that very booth just a few minutes before. She smiled and pulled some dollars from her little purse. "Then, try it again!" She fed the machine two singles and snapped a panel of herself and then she insisted I go again - her treat. We waited for the machine to cough up our our jaundiced portraits, and we both got a good laugh out of them. When I last saw her, the abandoned girlfriend was headed for the staircase, cupping her strip of still-damp photos in her hands - a cheerful talisman to keep her spirits up as she walked away, a single woman.

From what I heard of her toady ex, I think she's better off. She may not think that, just yet. But I'm willing to bet she will tomorrow morning.

Good luck, hon, wherever you are. And thanks for the pictures.

That photo booth story was so sweet! It's movie/novel/shortstory material

I am so calling you next time I go through a breakup. You need your own advice column.

Photobooths rock, and that story is definitely cinema worthy. You'll have to go see Hampden in all of it's Christmas glory.

Ye, gods - I'm already over the hill in Australia! Somebody shoot me now!

But, really - thanks, Paul-chik, for the birthday wishes - still got 6 hours to go here before I'm officially old!

And thanks, folks for the nice comments - photobooths do rock, and until yesterday, I did not realize their therapeutic effect on the brokenhearted. :-)

For some reason that reminded me of the whole photo booth thread in Amelie (one of my all-time faves)?

Something about how transient it all is, I think.

I was very touched by the photo booth story.

Maybe the whole act of capturing that moment helped the young woman wash away the grief.

Maybe all photo booth's are magic and everytime we use one, our life takes on a new direction.

Save your pictures, Merujo... maybe something very good is coming your way.