So, if you're not one, you can probably ignore this and live happily.

On Saturday, the Sasquatch and I trekked to Frederick, Maryland (aka "Fredneck"), home of the National Museum of Civil War Medicine and Barbara Fritchie's Candystick Restaurant (see "Crummy But Good" on that link for more info.) The Candystick is the home of the orgasmic hot apple dumpling. You think I'm kidding. I'm not. It's quite something. 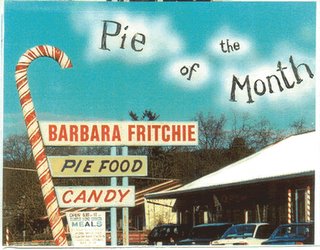 This picture could have been taken 30 years ago or yesterday.
This place is bizarrely timeless.
But we trekked to Frederick this time not to learn about Civil War embalming techniques or to eat of the mind-and-body-altering desserts. We were on a mission. The Atomic Editor shortly turns 40, and we were bound to Wonder Book, one of the most astounding used bookstores I've ever seen, to procure the boy a birthday gift. The Atomic Editor digs vintage sci-fi, and Wonder Book has a pile of awesome old sci-fi magazines from the 1950s and 60s (plus more from the 70s and 80s.) 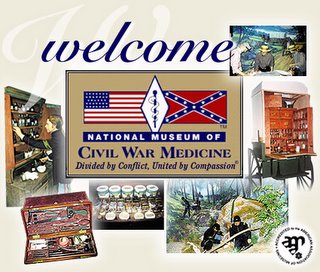 This is a great little museum. Be sure to visit it if you're ever in Frederick.
I was going to use an actual picture of Civil War embalming, but I figured that no one really needed me to spoil their morning coffee break with that. Seriously. Not pretty.
The Sasquatch and I had discovered Wonder Book on a recent trek to Hagerstown with the bigfoot's lovely girlfriend, the Scandahoovian. We were bound for an outlet mall (I was on my never-ending quest for attractive, work-appropriate shoes to fit my giant clown feet), and we stopped at a Maryland visitor center/rest area on I-70. As we pulled in, the Sasquatch and I had the same creepy realization - this was the rest area where a truck driver discovered the crazy-ass DC snipers, snoozing in their Chevy Caprice murdermobile. Once our "oog factor" wore off, we stopped in the visitor center and, among the 8 million glossy brochures touting overpriced vacation spots, we found a simple yellow flyer advertising Wonder Book.

Never ones to pass up secondhand books, we headed to Wonder Book's main Frederick location, after we finished the Bataan Outlet Mall Death March (where, of course, I found not a single goddamned pair of shoes to fit my economy-sized feet.) The Sasquatch and I were pretty excited about the possibility of digging through racks of dusty tomes. The Scandahoovian kindly put up with our mania. (Also, she had no choice - we were about an hour from home, and the Sasquatch was driving.)

From their less-than-wonderful website. They need some design help. STAT!
And so, in the back of the enormous store, stacked in wobbly piles on the floor, I found the vintage science fiction magazines. Most of them I knew from my childhood - Analog, Asimov's, Fantasy & Science Fiction, IF... My mother subscribed to most of them and read each story voraciously. I read most of them when she was done. (I still remember, when I was living in Moscow, my mom calling me from Illinois one night, wanting to discuss an article from Analog about quantum mechanics. She thought the whole concept was utterly fascinating.)

Back in 1978, Stephen King started offering up some novella submissions to Fantasy & Science Fiction, all about this Gunslinger fellow. In fact, the October 1978 issue of F&SF was the very first time Roland Deschain, the last Gunslinger, saw the light of day. Over five more issues, the first full story of Roland played out, and now, fans of the books search high and low to find copies of these magazines, to own the First True Edition of The Gunslinger. When I went to Wonder Book a month ago with my two compatriots, I thought I had scoured all the shelves and stacks of old magazines, looking for The Gunslinger. Alas, I had found nothing.

So, on Saturday, once again, I found myself faced with those stacks, this time hunting for choice gifts for the Atomic Editor's impending natal day (and we found some awesome gems for him.) The more recent magazines, from the late 70s, the 80s, and the 90s carried a low price tag - the vintage mags held a much greater value (and usually cheesier and more sexist covers.) Even though I was sure I had scanned all the magazines well on the previous trip, I felt I had to look once more at the Fantasy & Science Fiction copies. Heck, maybe I'd missed something.

Turns out, I had. The very first magazine I plucked from the shelf featured one of the Roland stories. The magazine was in mint condition and cost all of ninety-five cents. I think I may have been bouncing up and down like a possessed pogo stick. Yeah, if you're not an utter geek for The Gunslinger, this isn't going to grab you and swing you around. That's okay. For me, though, good lord... it felt pretty good. 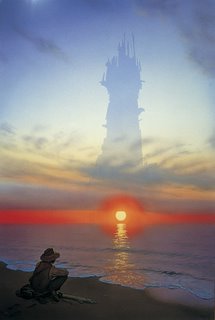 I loves mah Gunslinger. Oh yes, I do.
But the Sasquatch was about to feel a whole lot better. You see, I'd missed one shelf of magazines altogether on our last trip, and there, in the middle of that shelf, the sharp-eyed arboreal giant found The Mother of All Gunslinger Relics. The Holy Grail of Roland Stuff. He'd found a copy of the October 1978 Fantasy & Science Fiction magazine. The very, very, very first printing of The Gunslinger. The Sasquatch held it up in victory, and I nearly passed out.

Jeezus, we sound like some sort of pasty skinned geek freaks, don't we? Oh hell, who cares. It was a great little moment. I swear to god. And again, this one was only ninety-five cents. Honestly, we almost forgot we were there to gather our friend's birthday gifts. So greedy were we to find more, we actually drove down the road to Kinko's to go online and look up the publication dates of the other stories. We returned to the store with cheat sheets, looking for other Gunslinger booty. Alas, it was not meant to be. But that's okay. We found a gem in the most unlikely of places, and it warmed our little pasty geek hearts.

How excited were we? The Sasquatch documented our victory with his camera: 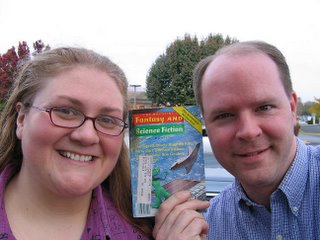 The Dork Squad visits Frederick, Maryland. Note my cheesy, toothy grin.
Yeah, we may be utter goofballs, but we could have worse vices that used books and old science fiction magazines.
Oh, and forgive my hair and my blotchy face, please. I know I look like crap, but I don't put on makeup or fix my hair when preparing for a day of digging through dusty old books.

The Sasquatch thinks he looks old.

I think he looks just fine. Just fine, indeed.
Posted by Merujo at 12:08 AM

Sounds worth a trip to Frederick to check out these things.

The National Museum of Civil War Medicine is neat, especially since it's housed in what once was the practice of one of the most notoriously bad embalmers of the Civil War. Bad, bad man. There are fun antique stores nearby and a cute little coffee spot right across the street. Best time to go up? When they have one of their speakers on the weekend. There's a funeral director who is an expert on Civil War era embalming, and he brings his collection of caskets and equipment when he does his presentations. He's a really nice guy, too, and very generous in answering even the oddest of questions. (Trust me - he demonstrated a piece of equipment for us. Eeeeee!)

Barbara Fritchie's Candystick Restaurant serves up the kind of food you'd expect your grandmother to make, if she ran a diner. The entrees are mediocre at best, but dear god, the fresh-baked desserts will rock your world.

And, if you like used books, Wonder Books (which is basically two or three blocks from the Candystick on W. Patrick) is pretty cool.

yeah, what alwayswrite said. you so don't look 40 in that picture. hell, you don't even look 30.

Oh, if you saw me in person, you'd have no doubt about the years!! (But thanks for the kind thought, regardless!)

First, can I say that I want some "PIE FOOD"?
I love that sign.

Second, this is my first official "Sasquatch Sighting". Handsome fella and a whole lot less hairy than I imagined.

Third, I know that feeling of "Eureka"! in a book store. For many years I had searched for the novel "Time and Again" by Jack Finney. It was one of my loved one's favorite books from his youth and I could never flush it out at any bookstores. One day I was at ratty old thrift store and found the hardcover edition for .25 cents. He spent the next few weeks reading the book out loud to me... a good memory.

Fourth, everytime someone mentions the D.C. Snipers, I experience a huge sense of community guilt. Yes, they lived here, before traveling there. Nearly everyday the older one drank coffee and played chess in the coffee house across the street from where I worked. I am sure I looked into his eyes at least once.

The same guy frequented the bar farther down the street. An infamous little pub, famous for their clam chowder and for feeding infamous serial murders. Yes, Ted Bundy ate there as did the Hillside Strangler and The Sniper. The clam chowder is good, but I always get it to go. If I am feeling brave enough to even go in there.

The younger sniper attended the High School down the street. We didn't know they were lunatics and I often wish that something had happened here to stop their migration east. It will always bother me.

Okay, now I am depressed, got any "PIE FOOD" on you?