Oh dear, Mutha Russia. Is there lead in your water supply, hon?

Authorities in the town of Rostov-na-Donu in the heart of Russia report that a 30-something mom and her two teenage sons have been arrested for murdering a man and then snacking on his innards.

When you read the news account here, the important sentence to remember is this:

"According to (police spokesman Alexei) Polyansky, there have been no cannibalism cases in the Rostov region in more than 10 years."

ELAINE: You remember the date?

JERRY: Oh no. That was the dry heaves.

(and, at last, one season later, after eating a bad black & white cookie...)

JERRY: Fourteen years down the drain.

Yeah, there you go. Now, imagine if that had been played out in Russia:

JERROVICH: I have not eaten one of my neighbors in thirteen years.

JERROVICH: Da, because my previous feast on human flesh was also June 29th... 1972. That's why during the '80 man-munch, I was yelling to Georgiy: "Can you believe it? I'm eating a neighbor on June 29th again."

JERROVICH: Oh no. That was just me nibbling on Yelainie's ear.

(and, at last, one season later, after an all-night drunk...)

JERROVICH: Fourteen years down the drain. Pass me the ketchup. (*BURP*)

Seriously, I just don't get it. What is the strange psychosis of the Russian mind, the twisted mark of the culture, that encourages the consumption of people meat? Apparently, over the summer, some Russian filmmakers created a TV documentary about the problem of Russian cannibalism. This was broadcast just a couple of weeks ago on the NTV network and shocked the hell out of people who don't eat people. In fact, it raised the hackles of the Russian Duma, which slammed NTV for broadcasting the incredibly graphic and gory piece and passed a resolution demanding Russian networks more closely adhere to a voluntary set of standards on how much violence they feature in their programming. 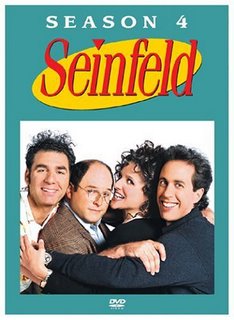 George tests Jerry's arm for plump juiciness
while Elaine prepares to eat George's face
(and Kramer has already basted himself in butter like a turkey...)
Good luck with that one, kids. The Moscow evening news programs already feature things that would scare the living crap out of most Americans, including features like "РОЗЫСК!" (SEARCH!) Broadcast during the dinner hour, the "РОЗЫСК!" segments show you close-up photos of decaying corpse heads and ask if you recognize them.

So, yeah, Mutha Russia. Good luck with the TV violence thingy. And good luck controlling your dangerous dining public. (This is why I'd never trust a rib joint in Moscow. Seriously.)

I think I'm having vegetable soup for dinner...

GEORGE: Say you, me, and Kramer are, uh, flying over the Andes.

JERRY: Why are we flyin' over the Andes?

GEORGE: We got a soccer game in Chile. Anyway, the plane crashes. Who are you gonna eat to survive?

GEORGE: So fast? What about me?

JERRY: Kramer's got more muscle, higher protein content. It's better for you.

GEORGE: Well I would eat you.

GEORGE: I still don't see why you wouldn't eat me. I'm your best friend.

JERRY: Look, if other people are having some, I'll try you.

No ribs in Moscow- check. I'm guessing no stews or pot pies either, right? Yikes.

Ever have one of those moments where you aren't certain whether you should laugh hysterically or be deeply mortified?

God this is distrubing.

This reminds me of one of those"so many days since last lost time incidents" signs they sometimes have on factories. I once saw one that had 2 days since our last incident,..doesn't really inspire confidence eh? Think maybe management might be a little slower to change the sign eh?

you know, hearing your stories, my lifelong desire to visit russia is waning.

and i'm with the vecordious one on this one, i didn't know whether to laugh or shudder in disgust.