The talented actor John Spencer died today of a heart attack. Spencer played Leo McGarry, President Bartlett's Chief of Staff (prior to C.J. Cregg taking on that position) on "The West Wing." Leo McGarry was one of the most significant, well-written, and deeply layered characters ever on "The West Wing." 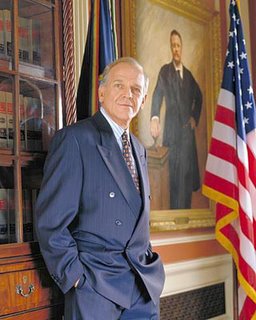 And last season, Leo suffered a massive heart attack in the woods at Camp David. The incredible pain on John Spencer's face as he fell in the silent trees, the rest of the White House staff departing, oblivious to Leo's desperate state... well, it was really brilliantly done.

And now, sadly, I will see that scene again and know how prophetic it was.

John Spencer was a pretty young man of 58, despite looking years older. He was a talented, scrappy actor - I never cared for Tommy Mullaney, the character he played on "L.A. Law" years ago but I appreciated his skill in bringing such life to Tommy. I just looked at the IMDB, and Spencer got his start on the Patty Duke Show when he was only 17. Wow. A minuet, the Ballet Russes, and crêpes suzette... (And if you get that reference, I'll buy ya a Coke.)

Clearly, Spencer's death is going to throw "The West Wing" into a measure of chaos. Leo McGarry had been chosen as the running mate for Jimmy Smits' Congressman Santos. He was expected to be around for a long time yet.

According to E! Online, an upcoming episode scheduled for January features a debate between McGarry and his Republican opponent. Dialog culled from a West Wing spoiler blog, The West Wing Continuity Guide, notes McGarry's comments after a question on health care: "By an overwhelming percentage, the first warning symptom of a heart attack is death. I'm fortunate to be here." Indeed.

Thank you for making a memorial post for him.

It is sad to lose so many gifted actors in such a short period of time.

It's been a rough year.

I'm going to miss John Spence on West Wing. What a class act he was. I was surprised when I read that he was 'Cathy's' beau on the Patty Duke Show.

I heard about this the other day and was surprised by his age. I'd thought he was older.

Our Patty loves her rock and roll
A hot dog ( hmmm... ) makes her lose control
What a wild duet
You can send my coke to Dayton,Nv