I haven't posted any fun-a-riffic photos of late. That's because one of the teeny little prongs on the Compact Flash reader on my computer broke off. Just plain broke off in the CF card when I pulled it out. Wham bang. That's the end of that drive.

So, I went forth to procure a USB CF card reader (god, this is compelling reading, isn't it?) Out on a foraging trip with the Sasquatch (who was preparing for his Turkey Day photo safari in New Mexico), I bought a SanDisk CF reader. $23.09 of joy, joy, joy.

Except for one thing. My computer refused to recognize the software. I reloaded that bastard 8 separate times. Every damn time, the computer claimed that the software was running. Alas, it was nowhere to be seen, and I finally gave up. Mr. SanDisk is sitting by the door, waiting to be returned to BestBuy (that wretched hive of scum and villany.)

Today, I intended to return Mr. SanDisk and try the $20 DigitalSomethingOrOther CF reader they sell at Ritz Camera. En route to Ritz, I realized I'd forgotten to bring the SanDisk one with me, so that will require yet another trek up the Pike later in the week (oh so much fun in the middle of Xmas shopping mania.) I get the one from Ritz and then hit Staples to get boxes to ship the incredibly minimal Xmas gifts I've gotten for my family. (No insult intended to my family - it's just that moolah is waaay tight. Sorry, everyone - well, sorry, Stacy, since you're the only member of the family who reads this blog!!) What do I find at Staples, but a CF card reader, dusty and unloved, on the clearance shelf. $11. I bought it. It works. Screw the SanDisk and its complicated software. Screw the one from Ritz that will just go back, unopened. This cheapo clearance card reader did not require any software. I plugged it in, and it worked.

And now, let the painful parade of photographs begin anew!! 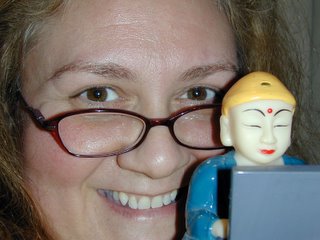 Squeezy laptop-usin' Buddha sez: "We're back, bay-bee! Whoo-hoo!"
He also suggests I comb my hair and put on some makeup...
Posted by Merujo at 7:22 PM

I want a laptop buddha! I love the clearance shelf. I bought a flash drive for $10. Love it.

He squeaks like a doggy toy! He's available from many online retailers, including the amazing Archie McPhee: http://www.mcphee.com/items/10476.html

And clearance shelves are the best. Truly.

Cool score. I was so stoked the first time I tried my dad's card reader: plugged it in and it worked even though he has a pc and i have a mac. No software needed. That always rocks.

Just had to do that.

And Gonzomantis wins the big prize!!! I was hoping that 20K wouldn't just be someone cruising by after hitting "next blog"!! Whoo-hoo!

I actually had to clear my browser cache a couple of times to force my status, but I think it was worth it. I am now famous!