I have had a less than festive December 23rd.

Woke up with such severe back pain, I thought death would be an exceptional option. This after waking up each hour on the hour having dreams about really intensely scary flying saucers, people drowning while snorkling, and me having to climb along catwalks and other unguarded heights.

Went to have some blood work done at a lab in Gaithersburg. I was fasting and had slugged down two 24-ounce bottles of Dasani en route to make sure I could pee in a cup on command. (Sorry, too much information.) Had an ungodly wait while three elderly Soviet Jews who barely spoke English tried to fill out the lab paperwork. I couldn't stand it after a while, so I went up to help them, as I am, on a good day, fluent in Russian. What I got instead of a big old "spasibo" was scorn and irritation from the old woman, who loudly bitched to the two men (her husband and her cousin) that they now wouldn't be able to gossip in the waiting area because "this girl will hear everything."

So much for good deeds. I silently watched them struggle and wondered just what the hell is wrong with people and did a little dance as my bladder throttled my brain. I enjoy speaking Russian. I'm comfortable in Russian, and it's my nature to want to help people who are having problems, especially when I can expedite them out of their misery. However, this morning left me with a real "fine, screw you, then" kind of emotion.

Take my bodily fluids and let me go, please.

Usually, labs want you to pee in a cup and then vampire you. This time, it was the reverse. Phlebotomists always have problems getting the veins in my arms, so, invariably, I get blood drawn from the tops of my hands. Newsflash: if you've never had this done - it hurts like hell. Fortunately, it's over pretty quickly (except for one time, where the dude had to have been an utter sadist and the draw took a hellish five minutes with him wiggling the needle all over creation.) This time, the vampire had a very delicate touch, for which I was tremendously grateful, but after having a needle in my left hand for a couple of minutes, I apparently ceased to bleed for her. Dammit. This meant another stick, in the top of my right hand, which gladly bled all over the place for her.

Mind you, though, throughout all this, I had 48 ounces of spring water yearning to be free. (Yes, I am an idiot.) Now, I have big piles of bandage and tape on either hand and I have to pee in a cup, which requires Miss Short Arms to do some sort of bizarre and obscene ballet move, all while nursing a screaming, burning lower back.

And that damn rude old babuskha was in the john. For ages.

Long story short - sample delivered. I just wanted to leave. En route to my car, I dropped my Timex sports watch out of my hand. It's just a blue plastic watch ($20 at Sports Authority years ago), but I love it. I turned to fetch it (slowly, mind you, since Mr. Back is still torturing me) and a little boy raced over and grabbed it from the ground just as I was leaning down. I saw his mom and said, "Oh thank you - your son rescued my watch." To which Mother of the Year replied, "Ain't yo watch now. He found it. He keeps it." And the little boy smiled and FLIPPED ME THE BIRD.

And the mother just laughed and laughed.

I was so shocked, I didn't know what to say. Finally, I started to laugh. "Niiiice. You're kidding, right?"

And Mommy Dearest folded her arms, tilted her head and answered, "I ain't kiddin'. You should have been more careful. You drop it. You lose it."

I considered the capabilities of my fold-up cane, and realized it was just not an option. "Lady, get real. We're outside a medical office. I just had blood drawn from both of my hands." I held up my hands, still bandaged and taped. "I took the watch off because my hand hurt. I dropped it because my hand hurt and I wasn't gripping it tight. I'm not some human Christmas pinata. Give it back to me."

To which Momster simply said, "Too bad, bitch." And she grabbed her still-smiling mini-thug child and steered him to her car. I yelled after her, "You have got to be kidding. This is pathetic. It's not new. It's scuffed up. It's crappy. And you're getting into a Lexus!! Oh my god! How fucked up is this?!?"

I stopped at that point. Could I have called the police? Yeah, I suppose so. But the watch is probably worth a whole $2 now. There was no way I was going to call the Montgomery County Police to report the kiddie theft of a $2 plastic watch - they've got better things to do. It's just that I liked it and it will be hard for me to find another one like it again. Timex stopped making that guy a few years ago, and it was nice to have a royal blue watch I could wear all the time without fear of banging up something nice.

I would like to say something Christian like "Well, I'm sure he needed it more than I did." But that's a load of horse shit at this point. Mom was dressed better than I was. So was the kid - he was wearing a child-size leather flight jacket that the Flying Tigers would have envied. They drove off in a luxury sedan I will never be able to afford. I'm just fairly ill at whatever whackjob lesson that kid learned today about decency and morality and ethics.

Hey, Mom of the Year - I thought I would be at the head table in Hell, but I think I was just warming the seat for you. Come on down, hon!

If anybody sees an inexpensive blue plastic Timex for sale somewhere, let me know. It was a guy's watch - I have big wrists.

After that, I made the poor choice of stopping by Costco. It was an error in judgment. I had a $10 cash card to use, and I thought they might have a nice cheap watch for me. Oh, I was wrong, in so many ways. I did not buy anything. I think I was muttering "get me out of here, get me out of here, getmeouttahere" audibly.

Handy hint - don't ever use the bathroom at Costco. (I was still suffering from Dasani-a-thon 2005.) Unless you like the sights, sounds, and odors of the developing world, pass on that experience. I hadn't been in a bathroom that dirty and stinky since Central Asia. I wanted to bathe in Purell. Buckets and buckets of Purell.

But wait - today gets even better! Yesterday, I ordered some photos online from Kodak/CVS. Just a picture of me at my new office, so I could stick them in my already delayed holiday cards. They were to be ready at CVS at 2 p.m. today. However, the truck driver apparently misplaced my photos and, in fact, may have accidentally dumped them in a parking lot at another Maryland CVS location when making his deliveries. Maybe I'll have the pictures on Monday. Maybe not.

When I got home, I finally had a box from A Major Publisher (who will remain nameless, since I work for them) with half the books I'd ordered as Christmas gifts for my siblings. Where the other half of the order is, no one knows. I ripped the box open, only to discover that the warehouse hadn't bothered to pack the box with any paper to keep the books from shifting, and all the dust jackets are torn and one of the books is badly damaged.

The warehouse isn't open again until next Tuesday.

And the tops of both of my hands are bruised now.

Man, I could use a drink. Will y'all have a big ol' holiday drink on my behalf? 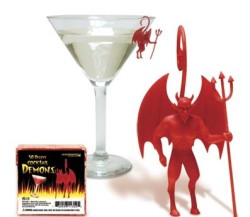 I think I need a nap. And an attitude adjustment.

First let me say I love your new picture.

About the watch thieves, may all they send out return to them three times. That's my favorite curse.

As for you, time to break this pattern of yuck, some of which you told me about at Pharoah's and now this. I'm sending protection energy in your direction. Please call upon your favorite angels or protectors. This shit has got to stop!

I would have written down the license plate number and called the police. Not because the watch is valuable, but because maybe an intervention will stop that woman from turning her kid into the unfortunate excuse for a citizen he's destined to be. (Seriously, you need a license to drive but they'll let anyone have children these days.)

You could have starting beating on her child with the rationale "I'm bigger than he is, Lady." Seriously, I would have gotten her tag and reported it to the cops, not that they care.

I hate Costco with a white hot seething passion and only go in on my brother's card. Peeps are CRAZY in there. You could not pay me to go in at this time of year.

GOOD GRIEF!! I hope things are better for you today. I was just complaining in my journal about how some people are horrible & nuts this time of year. The people you encountered sound like they're horrible year round. Maybe, you will have something really good happen to balance things out :)

that woman is so fucked up! I'm glad you stood up for yourself and your watch even if it didn't get it back, but man, did that give me the urge to assault someone!

I think I have an extra watch around somewhere, I will look.

I hope you're feeling and having a better day.

I can't believe the stole your watch... right there, right in front of you.

This pains my soul.

I think I need to vomit.

You've got to laugh don't you? You said it in your post and I hope you said to her that she and her son are pathetic.

Wonder how she got the Lexus? "You park it here, you lose it!" And the kid's jacket "You hang that on this hook in the classroom, you lose it!"

What a crappy day. I'm glad to see it got better and your co-workers got you a new watch. I was just about to sign on to ebay when I read that.