I found a t-shirt I want to buy and wear to the gym. I go to a very laid-back women-only gym, where I get no crap for being fat (as opposed to the Bethesda Y, where old women would come up to me and pat me while I was treadmilling and say stuff like, "Oh, isn't that nice, dear. You're trying to be like a normal person." Thus endeth my time at the Y.) Here's the shirt: 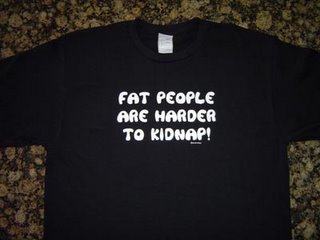 There is some truth there, no?
I'm finally playing around with the Special Ed version of Photoshop that the Sasquatch gave me. It's limited in scope, but I'm enjoying playing with the different effects, including this one, the actual name of which escapes me, but I'm calling the "Andy Warhol": 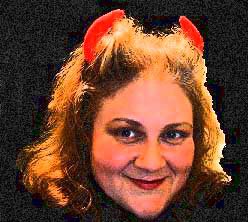 When CafePress starts offering black t-shirts in January, I may slap this on a shirt with a logo for the Church of the Big Sky. There's something nice about devil horns and a church reference. Let people wonder...


I'm considering re-opening a Yahoo! group I had a few years ago. I called it Merujo's Kitchen (or Lisseroo's Kitchen? I can't remember.) It was just a place where hip, smart women I knew could exchange recipes and just yammer about mundane life stuff (the stuff that's too boring to blog about, but it's nice to know about among friends.) It was a "creative geeks in the kitchen" kinda thing. I really dug getting cool recipes from some of the inhabitants of the group and it was nice to be in a no-pressure, conversational atmosphere were I knew everyone (and I knew there would be no freak-outs or flaming.) I disbanded it after some boneheaded loser co-opted my Yahoo address and started spamming half of the known universe. I had an "I Hate Yahoo!" moment. Lasted a few months.

The thought to revive Merujo's Kitchen came to me tonight. I have to make a cake for the office holiday party next Saturday, and the recipe for the killer chocolate chip sour cream coffee cake I'm making (bundt shape - great for the holidays - dress it up to look like a wreath) was one of the ones I shared with the Yahoo group. It was a nice group. An online kaffee klatsch.

Well, time to see if there's any interest. Maybe I'll get the band back together... 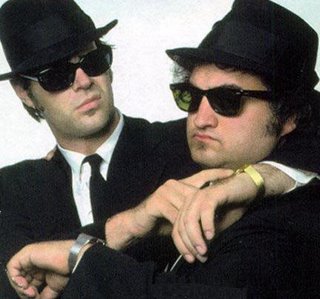 Probably not big fans of coffee cake, but I reckon they'd take a rubber biscuit.
Posted by Merujo at 9:42 PM

I'd be interested, but instead of slapping it on Yahoo (which I hate with a white hot heat), why not create another blog on Blogger.com?

That's not a bad idea. I shall ponder this...