If you read about my trek to Los Angeles, you know I'm awfully fond of the music of Thomas Dolby. There aren't that many musicians who would inspire me to haul my carcass 3,000 miles across country for a handful of songs. But the Dolby is something special. He is, frankly, a vastly underrated gem of 1980s/1990s music. He's also a tech-savvy guy with a visionary edge that has put him in the forefront of digital music for the Internet and mobile industry. (Think of him when you hear the ubiquitous Nokia ringtone - he handled the polyphonic arrangement of that sucker. He also did this great ringtone for a VP of Nokia who was slapped with a stupendously large speeding ticket - it's the sound of a motorcycle being pursued by the police.)

And, to top it all off, Dolby is just one damn nice guy. 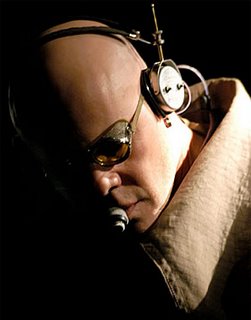 So, the time is growing near, children of the 80s, for Mr. Dolby to take his show on the road. And a good show it will be. He was great live in L.A., and a full set of his music will be fantastic. He'll be touring both the West Coast (in April) and the East Coast (in May.) I understand that he'll have around 10 gigs on each coast, and the full tour list will be out in a few weeks. However, DC, NYC, and Philly area folks - the dates for his gigs in your 'hoods have been announced:

I am tickled pink that Dolby will be playing two nights in the Washington area, and I hope that some of you fine folks will be there to tune in 'til the tune suits you right. Get your tickets while there are tickets to be had!

Tune in tonight.
Posted by Merujo at 4:58 PM

I'll sell a kidney to get there, baby!