It's Better To Travel, Part III

Or, a couple of days with Madame Crabtastica and the Divine Miss M...

I love camping. I love being out with the sound of the critters and the crickets and skies full of stars. I love fire circles and swimming and lounging in the sun with a good book.

Of course, just in time for this trip, I'd had minor toe surgery and my podiatrist told me "no way in hell" I should be dipping said toe into lake water. So, the bliss of swimming was out for the week. As far as sitting in the sun and reading? That never quite happened. I did, however, read a copy of the Weekly World News in my quiet cabin bedroom one night, laughing myself sick the whole way. Did you know that an enormous "manfish" has been terrifying beachgoers in Southern California? He's called the Manacuda, and he's really hungry for whatever you're grilling over your campfire!!

There's also a time-traveling transvestite called Miss Adventure and a boy named Fred Chopping who makes music with axes. Chopping. Get it? Har har har. Strangely, the only actual facts in the whole issue I read came from a column written by a horse and the accompanying column written by a monkey. I swear to god. The horse wrote about photosynthesis and the monkey explained the origins of paper money. I'm surprised that Bat Boy doesn't have his own column these days. 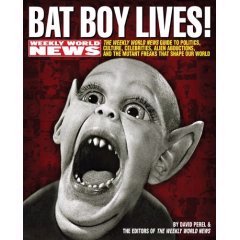 So, I still have most of my 3 for the price of 2 Borders paperbacks to read. They're still in the car, as a matter of fact. Most of my time at the cabin was spent sleeping, driving around, or listening to my sister's 15-year-old melt down, over and over again. My niece, Madame Crabtastica, wasn't having a stellar week. No way in hell. She had a very patient friend in tow, as well as Madame's 9-year-old sister, the Divine Miss M.

The first night, we had fun - a crackling fire outside, a ridiculous boardgame that required temporary tattoos with magic marker and a scavenger hunt in the cabin, good food (except for the moldy pie from a local grocery store -eeek), the sound of crickets and deer and frogs, something that bit my ankle and turned it into a huge black and blue lump. We had flashes of angry teen, but mostly things stayed calm and pleasant.

I won't say much about the Fabulous Fifteen experience. It's not fair to kvetch about teenagers. Most teens have enough tough stuff to deal with in their lives. Let's merely say this: in the end, my sister Nurserachet decided to pull up stakes and take the crabby one and her friend home a day early. My sister Social Worker and I stayed out at the cabin one extra day with Miss M.

On our one day as a full gaggle of campers, things had already started down the cranky path. So, a command decision was made: the girls would go see "Nacho Libre" at the Ottumwa 8 while Nurserachet, Social Worker, and I took our brother's ashes on a short road trip to visit the American Gothic house.

Most likely, even my readers outside of the United States are familiar with the Grant Wood painting "American Gothic": 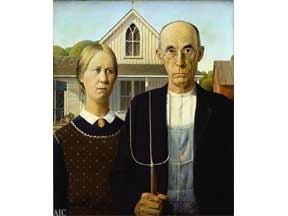 There they are: the dour Iowa farmer and his equally dour daughter in front of their simple Iowa home. It is, in fact, a real place in Eldon, Iowa.

The house is tiny and set in a neighborhood of other tiny, more modern houses. It's a well-kept little street in a town you really have to want to get to, off the main roads. The Gothic house is fragile, according to the historical marker across the street, and no one is allowed inside, save for a caretaker. But you are encouraged to create your own American Gothic image. Here is Nurserachet and Social Worker - you can decide for yourself which one is the farmer and which one is the daughter: 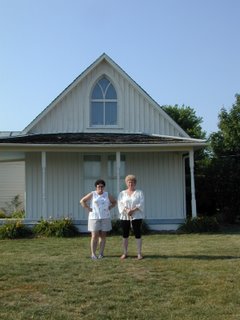 Not to be outdone, Ed also had his own American Gothic tableau: 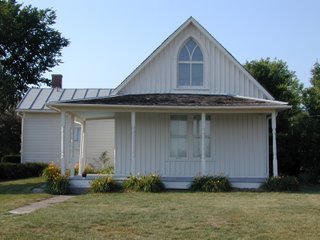 See something small and burgundy over on the side porch? That's Ed. Bet he never figured he'd make it here!
I was there, too, of course, but I'm less photogenic than Ed. Here I am with the historical marker: 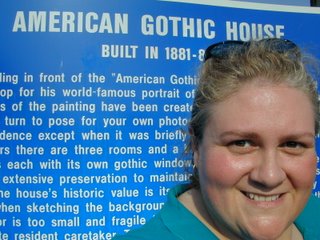 Of course, along with the tasteful opportunity for Ed to visit the American Gothic house, there were other, stranger photo ops along the way, like this one, at a local BBQ joint: 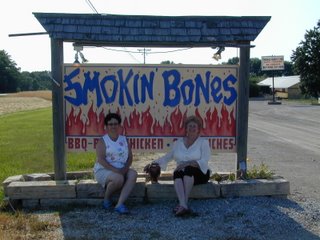 Yes, that's my sisters, with my brother's ashes, at a place called... Smokin' Bones... Please keep in my mind, my brother was a man with an utterly demented sense of humor. He was the guy who would hide in a dark basement and grab your ankles, shrieking BWAH HAH HAH HAH as you walked down the staircase. He's also the man who fashioned an enormous hand out of branches from our willow tree and smacked it against my bedroom window as I read "Salem's Lot" one night many years ago. (Of course, I was the one who got in trouble after I screamed and screamed at 3 in the morning - thanks, Ed!)

Some other interesting things we found along the road to Eldon that day: 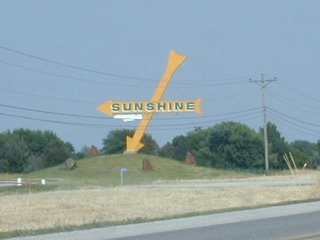 Apparently, sunshine is Right Here, under this hill, surrounded by the very Druid-y stones... 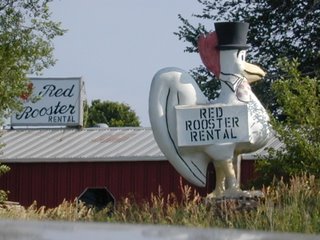 When I need to rent anything, I always turn to the giant rooster with the top hat! 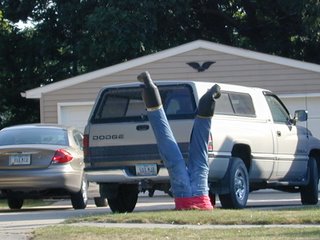 Someone was bored. Very, very bored.
If this is their mailbox, I don't want to know where the slot is... 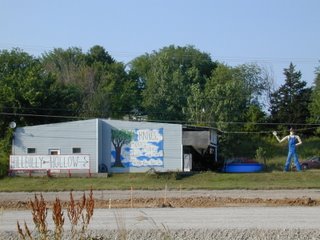 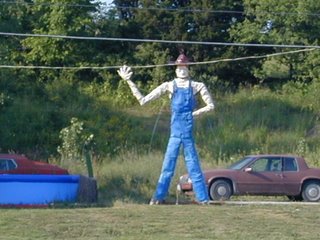 Where the giant waving hillbilly invites you to come in for... 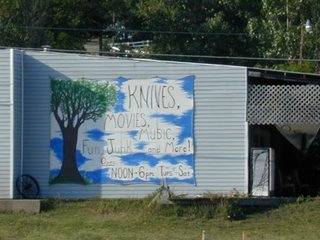 "KNIVES, MOVIES, MUSIC, FUN JUNK, AND MORE!"
I like how "KNIVES" gets top billing there...
In Ottumwa, we drove past the Canteen Lunch cafe - home to the original "loose meat" sandwich (later copied by Tom and Roseanne, when they briefly ran a cafe in Eldon, Iowa. Man, Eldon has it all - the American Gothic house and food from Tom and Roseanne!) 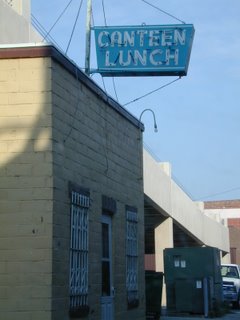 Canteen Lunch in Ottumwa - still in its original location and building. There is new construction around and, quite literally, over the Canteen, but it still remains - incredibly popular and a local icon. 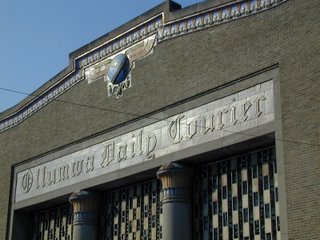 The gorgeous Egyptian-themed front of the local newspaper, the Ottumwa Daily Courier 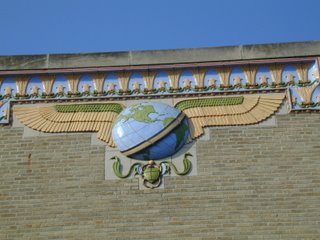 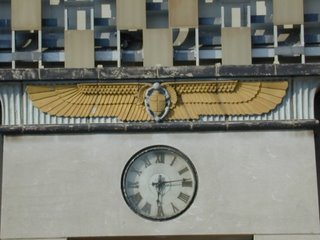 It was a good day, but then, back at the cabin, Madame Crabtastica went ballistic again, and the cast of our trip changed for the last day...
Posted by Merujo at 12:17 PM

I'm worried about this sounding insensitive...but I think the sightseeing you're doing with your brother's ashes is really neat and one of the coolest tributes ever.

The "Salem's Lot" story about Ed reminded me of how I tape recorded myself saying "Let me out...let me out..." in my best eerie voice and put the cassette player under my (8-years-younger-than-me) brother's bed -- with enough silence in the beginning that I could start the tape playing and my voice wouldn't begin until he was in bed with lights out. (Actually I think I got the idea from a Brady Bunch episode...)

The Knives, Movies (etc) sign made me laugh way-too-loudly out loud.

Anyway, your family sounds like so much fun, and your sister's early departure with her 15-year-old echoes my own early departure from our just-completed vacation. We saw Nacho Libre too, btw...

"Did you know that an enormous 'manfish' has been terrifying beachgoers in Southern California?"

Cyn - LOVE the story about cassette player and your brother. Gave me a great laugh! I think that taking my brother along just seemed like the right thing to do. Somewhere I imagine he's up there just giggling at the whole thing. :-)

And PT, that link? You made me snort my coffee up my nose. Love it!

Melissa, You should travelog the whole US for NG, from your warped view. I see a coffee table book now, and I would buy it. As a sibling who utterly enjoyed Ed's sick sense of humor until the last few days of his life (2 days before he died he played a phone gag on Madame Crabtasica), I say what fun for him to take a farewell tour to silly places he couldn't physically get to. It gave my children great joy, especially Ed's friend the Divine Miss M to help take Ed's ashes to the future home of Captain James T. Kirk.
nurserachet

While you guys were off gallavanting to the ends of the earth with with the Urn of Ed (grin), I thought that perhaps you missed the news that The Hoff is starring in/judging a new reality Gong Show type TV show, and cut himself in his gym locker, or in the bathroom shaving, or hit his head on a chandelier, or God knows what incarnations of this story are floating. Suffice it to say he's BACK! Baby!!

Oh, and he cried like a baby (on camera) from the audience when Taylor Hicks won American Idol. He's a sensitive Aughties male manfish.

The Smokin' bones shot made me laugh: how perfect! Not for everyone perhaps, but it seems quite fitting in/for the spirit intended.

And the building for the newspaper is way cool.

I saw "The Devil's Advocate" at the downtown theaters in Ottumwa, which were scary in and of themselves.

I must admit, however, that I have never been to the American Gothic house or Tom and Roseanne's. However, my best friend's brother's construction company got ripped off by them when they refused to pay for the work to build their mansion; I'm not sure if it's standing in a non-complete way or not.

And the poses with Ed totally rock. I'm sure he was smiling down on you from whatever higher plane he occupies now.

Good job, and good luck with the 15 year old. That is a rough time, I agree.