It's Better To Travel, Part IV 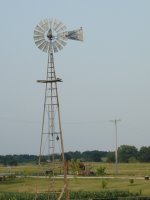 I’m going to give this a shot, although I can’t guarantee the quality of my proofreading. Sasquatch – if I make any huge mistakes, I’ll look to you to let me know.

So, I left you all hanging in the cabin at . My teenage niece, Madame Crabtastica, was having a toxic meltdown, and the rest of us were popping ibuprofen and waiting it out. In the end, my sister Nurse Rachet decided to take the teens home a day early, leaving her younger daughter, the Divine Miss M, out with me and our other sister, Social Worker. While Nurse Rachet packed the car, Social Worker, Miss M and I took another local road trip, this time to the in .

Blakesburg is another tiny town nearly off the map, like Eldon where we saw the American Gothic house. You seriously have to want to find Blakesburg in the middle of the corn and soybean fields. It’s about 10 miles outside of on winding rural roads, past the smelliest pile of manure I think I’ve ever encountered. (Not an attractive landmark, but effective in directing you there!) I almost missed the museum altogether and made a rather abrupt turn that made me very glad no one else was on the road. 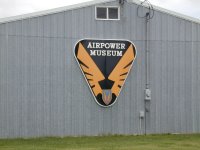 We were the only visitors to the museum for most of our stay. There were models and wonderful displays of military and civilian aviation, celebrating the lives and exploits of local pilots. 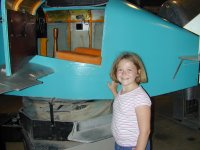 Miss M got to see a Link trainer, the device used to put her grandmother through her paces by military instructors back in 1943, and wander through a hangar full of biplanes and monoplanes and experimental light aircraft. I snapped photos of the static models for the Sasquatch and could not help but feel very sentimental over this heartfelt tribute to these local sons.

Notice I say sons, as I saw no daughters represented. Then again, it’s quite possible that this little corner of simply did not have any female pilots to represent in its exhibit halls.

I put ten dollars in their donation box and wandered into the back room museum store hidden behind the front door. No one was there, and the rooms were dusty, with a musty, mildewy smell. They had a pile of vintage fruit crate labels with aviation themes, and, in a back room (discovered when my sister hit the lights) some neat t-shirts and hundreds of volumes of old books on aviation and adventure. I know collectors out here in DC would have utterly drooled over the books. 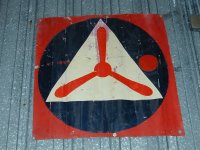 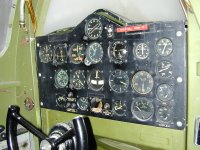 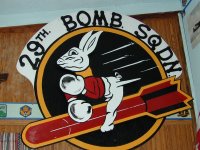 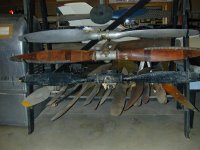 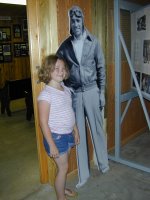 More photos from the Airpower Museum...

I got the Sasquatch a t-shirt (it would require a wee bit of bleach to remove the backroom stink) and my sister gathered a few things, too. She went across the dirt road to another hangar and handed over our cash as I bagged our souvenirs. It was entirely on the honor system, and there was an honesty to it all that I really miss here in .

Outside the museum, there’s a little memorial for the museum members who have “gone west” out of this life. Pretty cool.

We left and headed back toward the park and our cabin. Along the way, we stopped so that Miss M could commune with the draft horses kept by the Amish farmers south of . Miss M dug the horses, and the horses seemed to dig the attention. 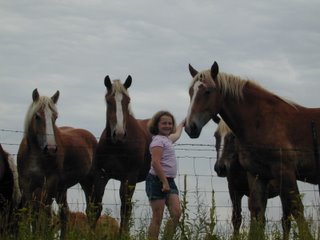 Along with hordes of horses, we saw some other nifty things on the road, like: 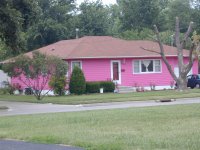 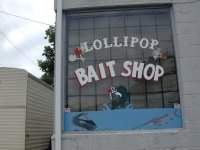 Lollipop Bait Shop - if you enlarge the photo, you'll get a good look
at the fish enjoying a treat on a stick...

And (sticking with a fishy theme)... 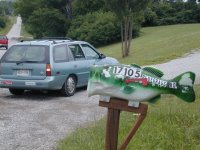 The most fabulous mailbox. Ever.
(With my car, the Crapmobile, in the background.)

We stopped at an Amish bakery – a shack outside a farm house – and bought fresh cookies to share with Nurse Rachet and the girls headed home that afternoon. At an Amish grocery store, we also picked up some noodles and odd sweets (twizzler-type treats, but root beer flavored) to take back to the cabin. That night, after Nurse Rachet left, sad to curtail her vacation, we had “Festival of Leftovers” – meats, veggies, whatever was in the fridge – with an ice cream chaser. (Rather decadently, the last of the ice cream would be revisited as a breakfast food before we departed the cabin the next morning.)

It took us the whole next morning to pack up the cabin and hit the road. Nurse Rachet had left us a wealth of food and supplies, and both my car and Social Worker’s were loaded to the gills by the time we headed out, bound for Moline, but with a couple of planned stops en route.

We were taking Ed’s ashes to TrekFest in . Oh hell, yes!

Here's a handy hint, though, if you're going to drop by a Star Trek event: if you don't want to look uber-dweebish, consider your fashion choices carefully. That morning, I was in a tan t-shirt and a black pair of capris and black sneakers. No biggie. Black and tan are the summer uniform colors for thousands of Washington, DC-area women. But my t-shirt was turned into a sweaty mess by the time we were ready to leave the cabin, and I had only one clean t-shirt left.

See where this is going?

You don't want to show up at a Star Trek event dressed like old-school command officers on ye olde Starship Enterprise. Yet, here I was, doing my "fat Kirk" impression - worsened by the fact that I was also wearing a gold and black National Geographic baseball cap. Oy vey. My sister thought it was hilarious. I felt like the Nerd To End All Nerds. Keep in mind that I love Star Trek. Hell, I made tribbles once in junior high (no skills required - just a couple of circles of fun fur, thread, a needle, and some stuffing.) But I don't dress up like characters. No sirree, bub. 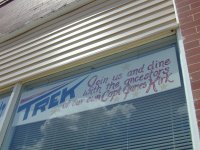 With my sister laughing all the way, we made our way to the local giftshop in Riverside, Iowa, where I bought postcards noting it as the future birthplace of - "Captin Kirk." Yes, they are printed that way. Captin Kirk. They also sell multi-colored "party tribbels." The Sasquatch thinks that spelling may be a copyright thing. Hmmm. The sweet owner of the shop told us that half the town clears out when the Trek Fest comes to Riverside, and the other half eats it up (and makes a few bucks, too.) To each his own. Turns out, our stop was a handful of hours too early to see any of the festivities, but we were just tickled to be making the stop at all.

The shopkeep directed us down the block to a monument, hidden behind a hair salon, marking the Kirk birthplace. After a pub lunch next door, we ventured forth with Ed's ashes in tow, to see the magnificent monument.

Here it is folks: 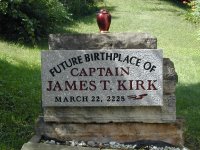 Yep, that's my brother up top. My sister actually weeded the rock garden in front of it before we took pictures. She figured it was a special occasion, so the weeds should go. Of course. 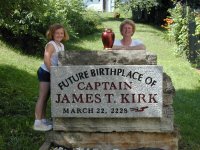 And, finally, yours truly, the giant bumble bee, Merujo of Dorkwad Command: 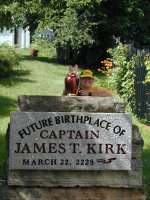 Vulcan salute and everything!
Before we left town (where I accidentally got separated from my sister in her car for the rest of the ride back to Moline), I took this photo at an antique tractor dealership (just someone's yard, really.) This is my favorite photo of the entire trip: 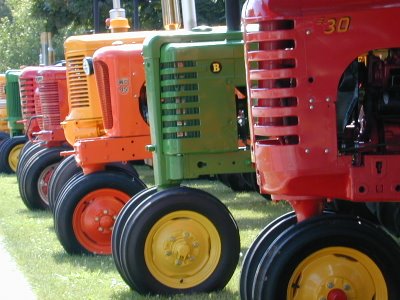 Neat, huh? I wish all my photos would turn out like that!

It was, otherwise, an uneventful drive back. And my last few days in Illinois were quiet. Time with family and friends, a few quick photos of local landmarks... 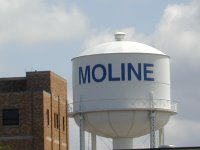 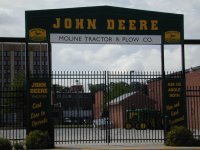 Down at John Deere Commons... 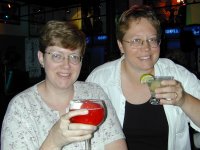 Yill (l) and HoyaMEB at the martini bar.
Yes, we have a martini bar in downtown Rock Island, Illinois.
Good lord. 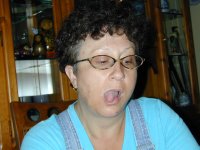 Nurse Rachet will kill me for this... 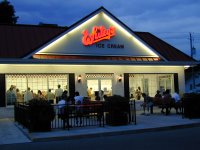 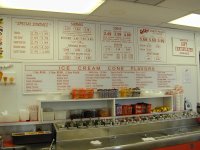 Inside Whitey's. If you go, may I recommend the turtle shake? 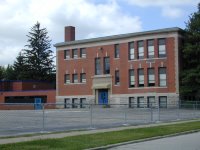 Garfield - the elementary school I attended.
Across the street from Teske's Seed & Feed...
and the Belgrade, the local bar - still going strong. 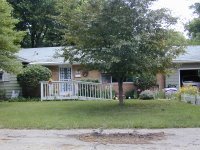 The house where I grew up.
It gets harder and harder to leave, each time I go home. This time was especially hard, knowing that I was leaving a family - a set of siblings - that would never be whole again. We're getting older. We are moving in all sorts of different directions, even when we're standing still. I cried leaving Moline. I was dead tired, and I could have used a few more days to just sleep. Instead, I headed for Chicago and then eastward, home. I tied my hair back, covered my left arm in sunscreen, opened the windows, plugged in the mp3 player and turned the volume up. Way up.

Little did I know, Mother Nature was screwing over the whole East Coast. It would have behooved me to listen to the news at some point during my drive back to DC. Oh yes, indeed, it would have...
Posted by Merujo at 9:37 PM

Sounds like a pretty good trip all in all. I really dig that tractor shot too... they're all so clean and pretty!

Excellent recounting. Families can tug at our hearts in all sorts of ways we can't control, and yes, the weather here totally sucks.

That tractor picture is great. I love it :)

The Air Power Museum sounds so neat. I want to visit!

Thanks, ladies, for the comments. My sister, Nurse Rachet, is, of course, just thrilled with the photo of her I shared with y'all. ;-)

Heather, the Airpower Museum was so sweet and touching. I hope it's there for many years to come!

Thanks for finishing your tale. Laughed out loud, which I'm not doing enough of lately.

The Divine Miss M is a cutie! Loved all the photos, most especially the lollipop-loving fish (amazing!) & Ed visiting the future birthplace of Kirk.