Tonight was the first cool evening of the season. Ernesto brought rain and wind, and a brief cold front has settled on us for one night only. Tomorrow, Washington September will return, with temperatures in the 80s and, most likely, swampish humidity.

But tonight? Aaaaah, it was glorious. I took my sketchbook and my laptop and hunkered down at the coffee shop for a few hours, eye patch on, chatting with distant friends on Messenger, drawing out t-shirt ideas (long live the sex weasel!), and slowly nursing a giant cafe mocha bought with the last of the points on my "customer loyalty" card.

And I had a jacket on. A jacket!

There were two kids playing electric guitar tonight. They were pretty good, playing Beatles and Oasis and Pink Floyd (although they occasionally forgot the words.) They were Russian kids, and halfway through one Beatles number, I realized they were singing po russky. I suddenly felt a little homesick for Moscow, where the Beatles were still topping the charts when I moved there back in 1989. It was good.

The Sasquatch came up for an hour tonight, right before the shop closed down for the night. I showed him some of my t-shirt ideas, and we read Fark. I realized how lucky I was to have a friend who was willing to drive 10 miles just to hang out for an hour.

When we left, the temperature had dropped even more. The Sasquatch headed back home in his car, and I drove the Crapmobile slowly down the Pike, trying to figure out where to grab a quick bite, since I'd failed to eat dinner, and my head was throbbing from a caffeine overdose. I rode with the windows open, enjoying the cold night air. I briefly considered a stop at IHOP, but opted out when I saw it was filled to capacity with Rockville nighthawks at 10:30 at night. Down the block, Dunkin Donuts was doing a brisk trade, too, with people spilling out onto the sidewalk. I ended up at the McDonald's drive-thru, grabbing a McChicken and a bottle of water. 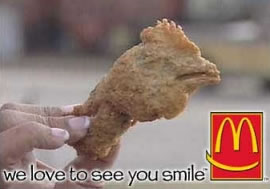 The McChicken sandwich should be considered "food" only under circumstances of dire, imminent starvation, and, even then, that's questionable. Two bites into the compressed bird - the fast food equivalent of IKEA particle board - I tossed it back into the bag. Dinner was over. It didn't help that I had parked directly in front of an enormous rat bait station... and it had a visitor...

Down the Pike, strip mall after strip mall... Mostly empty, save for the lots by TGI Fridays and Bennigans and Ruby Tuesdays, all serving up virtually identical fare with cutesy names... The lot outside "the Fast & the Furious Barnes & Noble" was, as usual, half-filled with a clutch of young Asian and Latino gearheads, comparing notes on their street racer Hondas. Across the street, the smell of barbeque hung in the air outside Houston's, filling my car with a scent at once both unbearably appetizing and nauseating, post-McDonald's.

All the neon signs I love were glistening in the rain, but my double vision makes it all less pleasant these days. I find myself squinting the bad eye shut more and more often, which worries me. I'm afraid one of these days, my brain is simply going to stop accepting signals altogether. Right now, the text I'm typing is a jumble - a multiplicity of letters and lines that frustrates and exhausts me.

I'm home now. In from the chill. The McDonald's bag has had a Christian burial in the kitchen trash can (better than that crap deserves, frankly.) And it's almost silent outside, except for a few hearty crickets. I guess the frat boys across the street are gone for the holiday weekend. (Thank god.) So are most of the folks in my building, it seems, from the empty street and dark windows. It should be a good night for sleeping.

In the morning, I'll start sorting more things for eBay, doing laundry, and attempting to dig out my apartment, which is an utter mess. It will be therapeutic.

Tomorrow would have been my mother's 85th birthday. What I wouldn't give to celebrate that with her.

I'll have milk toast for breakfast in her honor.

Good night, sleep tight, and to the U.S. and Canadian folks, have a very good Labor Day holiday, indeed. The last gasp of summer is upon us. 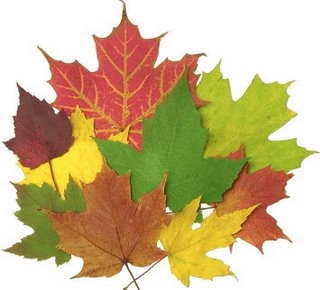 Ernesto cooled things down here in Augusta, too. I didn't really go outside much, though--just long enough to drive to Hardee's and back ;P

Looking forward to seeing your designs :)

Not to negate your typically eloquent post, BUT the Chicken McGrill (non-fried chicken sandwhich) is pretty good. Really. (Says she whose house is about to be taken over by Happy Meal toys...)

I agree; the McGrill is num.

I've not had the McChicken, but I love McDonald's hamburgers :> Comes from growing up eating there, I guess.

Once again I surface in the face of a truly vital issue of the day, to offer a compromise. Seems I know WAY more about McD's than I ever thought would be possible.

The McGrill, indeed excellent and nearing-actual-quality food, but something along the lines of $3.

The McChicken's best attribute (though I must admit I do actally like it) is that it's $1. (Same as the staple of innumerable diets, the double cheeseburger.)

So I offer (and I wish McDonald's was paying me to do this, but they're not) the very decent Snack Wrap at $1.29. Not sure if it's nationwide or just being test-marketed in the Philly area.

All they do is take one of their "Premium Chicken Strips" (which means it's still fried and breaded, but based upon actual chicken breast instead of the Ikea particle-board stuff of McNugget and McChicken fame) throw in some lettuce, ranch dressing and never quite enough shredded cheese, and wrap it in a flour tortilla.

It's actually very good, (though I do often wash it down with a double cheeseburger.)

Hey, they SHOULD be paying me for this.