Today is my birthday (#41) and it's also the birthday of my friend E, The Desert Dweller. E and I met via the old Thomas Dolby mailing list Alloy over ten years ago. (Let's hear it for the Internet, eh?) Turns out, at the time we first "met" online, we were living not only in the same time zone, but also working in the same metropolitan area, here in DC. But, alas, we didn't actually become friends until she had moved with her husband to a spot thousands of miles away. And then it was one of those Homer Simpson "D'oh!" moments.

"Wait? You mean you were just a few miles away?"

We found out we shared a birthday and started to quietly refer to ourselves as the "Pirate Twins", a reference to the Dolby song "Europa and the Pirate Twins." Silly? Sure. But pretty amusing to two relatively quiet women who forged a friendship on a music mailing list.

Over the years, we've managed to meet up a couple of times. Once, we took her kids to Disneyland when I was swinging through California on a short trip, and another time we met up at a bookstore out here when she was swinging through the East Coast. I think the bookstore was actually our first meeting - a big hug in the parking lot of the local Barnes & Noble and a few minutes to chat before having to race away.

When we were at Disneyland, we had pirate hats embroidered with the words "Pirate Twin" and took a very silly photo (which I can't find, dang it.) Most recently, we met up for one of Thomas Dolby's concerts in Los Angeles in January - an appropriate meeting spot for the Pirate Twins. We were even able to engineer a Chesapeake Bay sailing outing for Dolby in Annapolis during his spring tour earlier this year, via e-mail and E's wonderful network of friends along the ocean. Pretty cool, eh?

She's incredibly busy with her family, and I've been sucked up into my bad "Lifetime Television for Women" personal drama, so we haven't been in touch much over the past few months. I think it's all part of the ebb and flow of life - kids, health, money, family, general chaos - and things will eventually get back to their karmic center. 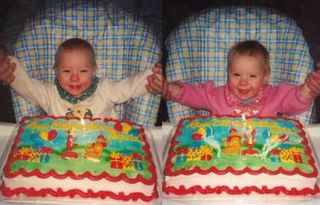 Happy Birthday young lady! (And to the Desert Dweller) I raise a Coke Zero to toast you both!

You've totally got me envisioning your Lifetime MOW now. Finish writing up your life and sell it to those melodrama pushers!

And speaking of such fan lists, I'm hearing rumors there might be a wacky and expansive tribute collection to one Mr. Penn, being released on or near the birthday of the person whose cool idea it was!

d'oh! knew my spidey sense was twitching for a reason yesterday.

Happy birthday Melissa! [big hug!] and to EL too of course.

Happy Birthday! And may this year be full of all things good for you!

happy belated birthday to the pirate twins. I hope it was a good day for you both!!!

Wow! Thanks, merujo! Happiest of birthdays to you, as well. Little late here on my end, sorry. I actually got a migraine headache and sat Wednesday out.