Orson Welles' only Oscar, for Citizen Kane, is going under the hammer.

I love Citizen Kane. I'm typing this right now under a fabulous UK quad poster for the film's re-release a few years ago.
I think Orson Welles was a genius, and I'm saddened that he declined into a joke in his later years. Tragic, really.
The guy was freaking brilliant. 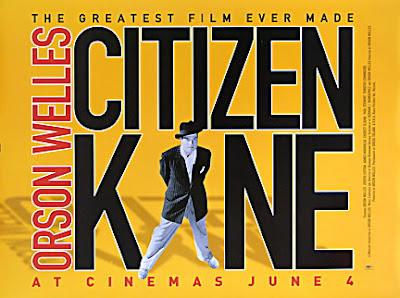 At least Citezen Kane isn't going under the knife!

Yes, Orson "we will sell no wine before it's time" Welles did have a less-than-ideal later career, but history has given him a lot of respect already...

OK, I'll just say it up front and I'll say it quickly, as I fear this comment will end our friendship: Iseriouslydon'tunderstandwhy
thisisconsideredthegreatestfilm
ofalltime.

There. I've said it. Are we still friends?

OK, in fairness, I've seen Citizen Kane and I know it was groundbreaking in terms of direction and innovative for its lighting and camera angles and use of music, but beyond that, I honestly did not like this film.

Maybe I need to see it again, since the first time I saw it was in college. Hm.

FWIW, I did like Welles as Harry Lime in The Third Man. Excellent film!

In the meantime, someone please, please enlighten me as to why CK is so great. I fear I'm missing something vital here. And, to top it off, I'm shallow. I want to stay friends with those who adore it.

I first saw Citizen Kane in college, too - in a film analysis class. That was the first film I learned to deconstruct and see as elements, and how each element was used to craft the overall product. I think I really love the movie because of what it meant for the art of cinema. It was a film at the crossroads of theatre and true cinema. Also, at the core, I liked the central character, despite his enormous flaws. There is a sadness and emptiness to him as he ages and becomes ever wealthier. "...if I hadn't been very rich, I might have been a really great man." I cannot ever imagine becoming insanely rich, but I can relate to the feeling of the loss of myself, and the desire for something that hearkens back to the simplicity of childhood.

I unfortunately have to admit I've never seen this film.

I think I'll have to see it again. I saw it as a class I took in college, but mine was "Music in Motion Pictures" and I took it to fill my art credit. It was actually a fun class, but we deconstructed from the standpoint of the use of sound and music. I'll add this one to my Netflix queue.