Thursday night, I stopped by the CVS in downtown Bethesda to pick up a box of Nice & Easy 114, the current (non-freaky red) cheap hair color of choice. I snagged a parking space next to the two handicapped spots and went in. As I scanned small boxes for the right color, I overheard snippets of a loud conversation between a couple perusing the Easter candy aisle.

"But do you think he's really handicapped?"

I assumed someone with no handicapped plates had pulled into one of the few designated spots at the pharmacy. Wouldn't be the first time that had happened here in the land of entitlement. I thought nothing of it and paid for my box of chemicals.

When I got to my car, I saw there was a very spiffy Jaguar parked next to me, occupying a handicapped spot. Indeed, there was a handicapped tag hanging from the rear view mirror. An older gentleman sat behind the wheel, the driver's door open. He had one leg stretched out the door, and, though I tried not to look, I could not help but see he had a serious palsy in one arm.

Or so I thought.

As I did the "healing spine sideways shimmy" to get into the Crapmobile Mark II, I got a better look.

The guy was going to town, whacking his willy in his fancy-schmantzy car. Polishing the wood. Beating his well-aged meat. Wanking with abandon.

I could not help it. I just stared, my jaw scraping the ground.

For once, I didn't say anything. I was just astounded and drove off, shaking my head. I know being affluent is no guarantee of having common sense, but there clearly had to be something wrong with this dude. At least I understood the conversation of the candy aisle couple.

What the hell is the problem with this CVS? Is it a second Pike Hellmouth, like the 7-11 by White Flint? I'm starting to think so. And I think I'll start using Purell after touching any products in this particular CVS location... 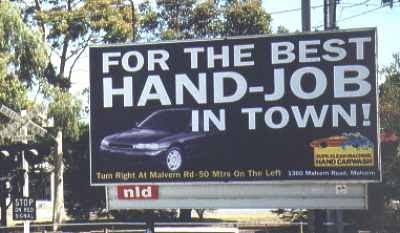 I've said it before: You can't make this sh*t up. Which is sort of sad, really. Nothing more disgusting than someone getting it off in public. Just pathetic is what that is. Pathetic.

But, as always, well told.

Sorry you had to watch that, but thank you for the deep belly laughs.

Good lord...the things you run into!

Speaking of where you live, I read recently that there is a huge canal near you. Like a hundred miles! I've fallen in love with Augusta's canal, but it is nowhere near that length, man. (No, Mr. Jaguar, I'm not talking to you)

Yikes! You have seen more weird crap at stores and theaters than I have in my entire life, I'm afraid.

Sorry haven't been around much...kind of been on a blogging "break" of sorts...but I am back again. We'll see if I can post a bit more regularly these days.

Once, someone called to me as I was coming out of a Dunkin Donuts. He said "Miss! Miss! Those are really nice shoes! Can I touch them?" I got in my car and zoomed out of there.

There's a lot of strange people out there.

Have you ever thought that maybe the entire area you live in is the hellmouth?

No. No. A thousand times No.

Listen, I'm reading this at work...at "wanking with abandon" I jumped out of my chair and dashed down the hall to grab my stashed can of Coca-cola Zero from the frig. I mean, this story deserves refreshment, damn it!

Now that I'm back in my pod and I've finished reading the post...well, I was planning on stopping at CVS on the way home (for my very own Nice N Easy fix -- it's on sale this week btw) but now I figure it'll just be a huge disappointment. For I'm sad to say I have never seen any public sexual conduct whatsoever in my particular corner of suburbia.

Some girls have all the luck.

Cyn - you're starting to worry me.