I'm sure you do a lot of good during the workday, fighting corruption, improving infrastructure, and eradicating poverty, one nanny tax payment at a time. You guys have big brains. I know this to be true.

But can you tell me, dear men and women of high education and lofty goals, why you insist on walking through Pennsylvania Avenue against the light, often through the middle of traffic, at the end of the day? Are your beautiful minds simply so overwhelmed with Great Thoughts that the colors red and green lose all meaning? Have you somehow been brainwashed to believe that the big red palm on the traffic light pole means "come forward, my children, no one shall strike you?"

Or, more to the point, are you really that dumb?

Why on earth do you risk not only your lives, but those of the drivers who have to dodge you as you break the laws of DC (and common sense)?

Honestly, if you don't care that much for your own health and safety, at least be courteous enough to think about the rest of us. I *really* don't want to be in a decade of therapy because I accidentally mowed down an errant Ph.D. doing the headless chicken stroll in the fast-falling autumn darkness.

(Insert your own "why did the economist cross the road" joke here.) 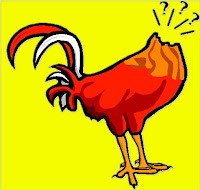 Admittedly, it's not only World Bank peeps who pull this crap in downtown DC. And everyone who pulls crap like this is an arrogant menace. But since I have to go through the intersection of Pennsylvania & 18th just about every evening, it's y'all, with your World Bank ID badges fluttering in the breeze, that annoy me the most.

Tonight, I almost killed one of you guys.

This dude was yammering on a cell, mindlessly bolting partway into, partway back, partway into Pennsylvania Avenue, dressed in black, after sunset, in the middle of the damn block. And when I had to slam on my brakes and honk at him, as he continued to chat away with great self-importance and very little self-awareness, he did at least stop momentarily to give me a rude gesture very recognizable to this former Moscow dweller. And, in return, I called him something colorfully naughty in Russian*

Now, what I yelled wasn't very nice, but neither was his gesture - or his efforts to needlessly make himself a moving target in the center of the bloody street! (I do appreciate that he noticed my effort to make a culturally- and linguistically-appropriate response to his stupidity.)

Here are some handy hints (that you are ALL old enough to already know):

1. Walk with the light - this is not brain surgery. If you decide to stroll out into traffic when a Hummer is five feet away from you, the Hummer will win. Without even trying. Or wanting to win.
2. Once you've mastered that red/green shift, cross in the damn crosswalk. They went to the trouble to paint lines for you, the least you can do is use them.
2. If you are Crackberry-addicted, take a break from the pipe. Stop texting long enough to look up and make sure you're walking with the light, Carol Anne.
3. Treat drivers and bicyclists with the same respect you want for yourself - follow the rules small children are taught about crossing the street, eh?**

Now, I believe most World Bank folk to be people with common sense and an awareness of their surroundings. Heck, I count World Bank people among my dearest friends. But to the Penn & 18th dorks I say this: you are smart people. Don't be tools. Knock off the dumb and dangerous stuff.

*I shall refrain from sharing my crude Russian obscenity of choice here, but it was a goodie, trust me...

**Although I think World Bank employees are exempt from holding hands when crossing the street...

Ha, I bet he got a bit of a shock hearing an appropriate Russian response...

"I believe most World Bank to be people with common sense and an awareness of their surroundings."

I will tell you from vast personal experience that, by and large, they are not.