Childhood Memories of a Weirdness Magnet

Installment #1 in a series of posts to prove my talent for attracting strangeness is not a recent development. Exhibit A: 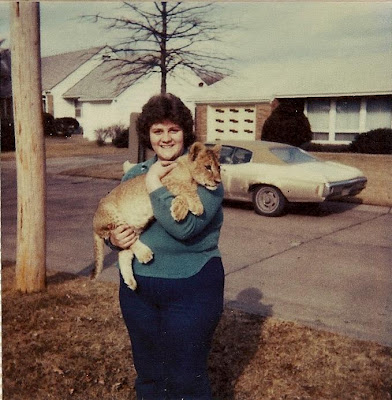 This is me, circa 1978-ish, returning a runaway lion cub to the neighbors across the street from my parents' house. The lioness at our local zoo (Niabi Zoo) had three cubs and she rejected them. Teske's, the local seed and feed (now a "pet and garden center") offered to keep the cubs until Jim "Wild Kingdom" Fowler could come to pick them up for resettlement in another zoo.

One of our neighbors worked at Teske's and she was assigned to bring one of the cubs home when the store was closed, so it could be fed and tended to properly. Except this was one fast little sucker, and he escaped. I remember looking out our front window and saying, "Hey, Mom, there's a lion in the yard." Mom, knowing me to be a total BS artist who liked to prank her with silly stuff, completely ignored me and continued to read a copy of Ellery Queen's Mystery Magazine.

Until I went outside and returned with a lion cub that I plopped down in her lap. He was very happy to have a cozy lap and a fireplace. Mom was thrilled until he decided to relax by stretching his limbs and extending his massive kitten claws into all parts of her body.

That photo was snapped by our neighbor when I brought the runaway back home. I enjoy the composition of this photo, btw, wherein I appear to be growing a very large tree from the top of my cranium.

I once had a dog suspected of having rabies follow me home...my parents called the local authorities and that was quite a spectacle. The dog didn't seem mean or anything, but I imagine it was probably put down if they thought it had rabies, unfortunately. Another time a porcupine wandered down from the mountains into our side yard...at the time there were few houses between our house and the foothills, which were only a couple miles away. I think it had been a dry year and the porcupine was hungry, and we had pine trees in our yard (which is what they like to eat, pine bark.) In that case the animal control people just transported the critter back up to the mountains and released him. Glad that the lion cub was (mostly) friendly!

Wow. Not many people have held a lion cub. And that is how it should be. Freaky!

Wow - how cool! You have so many amazing stories my lady...

awww..i went to a summer camp @ a lion cub rescue they let us each "adopt" a cub for the month and keep it with us all the time...seems crazy now right?....
"ellory queen magazine" *sigh*