I was flat broke this last holiday weekend. Lots of bills came due at the same time. Co-pays due for some medical tests. And, the State of Maryland (or the USPS) managed to lose my 2009 tax return and accompanying check. The kicker was the double whammy of having to redo my taxes, pay late fees and interest, and then cough up $36 for a stop payment fee to my bank. Hilariously, the Maryland tax clerk I worked with to resubmit my taxes said, "Well, why stop the payment? We can just cash that check and apply it to your account."

Because everyone can just cough up their taxes twice.

As I sat in her cubicle - festooned with dachshund photos and posters - and waited for her help, she was looking at pictures of Donald Trump on a celebrity gossip website. "This guy," she drawled in a heavy Eastern European accent. "How he gets all these pretty women, huh? Money. That's it. Money."

Yes, babe. It's money. And that's what I came to discuss with you.

An hour later, I'd had my taxes done (again.) Wrote a new check. Got the hell out.

Amusingly, this adventure in civil service was followed up by a letter to me from the State of Maryland, stating I owed them money for 2009. This letter was dated after they cashed my replacement check.

Not sure which part of the holiday weekend I enjoyed more: that letter, repeated bloodletting with cranky people bearing needles, or the arrival of DC's stinky swamp heat.

Actually, I know what I enjoyed most: spending time with the Sasquatch. My friend is a damn good guy (and it's his birthday on Sunday, so Happy Birthday, buddy - a wee bit in advance.) We grilled steaks indoors for Memorial Day. Grill pans rock. So does picnic food in glorious air conditioned splendor. Ahhhhh!

Otherwise, there's little difference between the Scandahooligan and American horror formula: hot guys and girls go to a cabin for a weekend of drinking and sex; old guy shows up to offer ominous pronouncement about terrifying things in the woods; there is beer; there is music; there is cabin sex; and then, there is blood, guts, and lots of screaming.

The most horrific part of this film? The cabin sex. All I will say is, it took place in an outhouse, there should have been lots of Purell applied to someone's hands, it made me dry heave, and it will be a cold day in Hell before I kiss anyone's fingertips.

Let's just leave it at that, shall we?

Along with the zombie picnic in my living room, the Sasquatch and I made a trek to the Raiders of the Lost Ark warehouse-sized repository of used books that is Second Story Books in Rockville. I had cleared out a good quarter of my books in the hopes they might buy them from me and give me a little grocery/gas cash for the coming work week. Alas, no cash was to be given. But I did get forty bucks in credit.

So I could buy more books to fill the holes in my shelves.

When I'd started pulling books from my shelves the night before, some papers fluttered out from the pages of an oversized hardback book I hadn't opened since, most likely, high school. There was a big promotional photo from a Moline High School production of "Blithe Spirit" (in which I played Madame Arcati, the extra large medium) and my membership certificate in the International Thespian Society. Dear lord! And then, there was a pencil sketch from 1976 of a bright-eyed girl with her hair pulled back, looking confident, assured, and with much less frizz framing her face than I remembered.

It was a sketch done by an artist working from a kiosk at South Park Mall back in Moline, Illinois. I remember going to the mall with my mom and vainly asking if I could have my portrait done. Not sure why Mom gave in and let me get immortalized in pencil, but she did. The result was a confident, butter-couldn't-melt-in-her-mouth idealized image of a kid who really was rather homely and couldn't drag a brush through her thick hair without hitting a tangled snag. I would like to have known this self-assured kid on the yellowed paper.

And, after a little reflection on life and how things have changed over the years, I realized I did know this kid. This was me at ten. And I was happy - mostly unaware of the ugliness of the world, believing in the adventures out there, instead. And it mattered less then that I was a homely, fat kid with tangled hair. I didn't know I'd be a lonely fat chick at 44. I didn't know then that I would be filled with regrets at things missed or lost - marriage, family, children. I was just happy.

For the most part.

As readers of my blog know, I was already being bullied back then, and, just as now, I couldn't fathom it. I see the name of the sister of my tormentor on Facebook comments now and then, and I have to fight the urge to ask her if he's still a miserable jerk. But then, I take deep breaths and simply hope he hasn't passed along a legacy of hate and cruelty to any children in his home.

And, instead making that the icon for that time, I try to think back to ten and remember the things that made me happy: my friends, riding my bike, reading, singing, swimming in the city pool all summer. (To this day, "Silly Love Songs" by Paul McCartney and Wings will remind me of going to the pool, which sat below a cemetery hillside that shelters one of Charles Dickens' sons among the daughters and sons of a city of industry.)

I'm trying to develop an adult sense of that happiness I had back in childhood. Some of it is gone forever, of course. Some things will never fill the empty spots where a partner or child would have been. But there are basic joys common to all ages. I lost a lot of that in recent years, and I'm working on rediscovering it. Simple pleasures for simple people with shallow pockets.

Here's to hoping I can find it. And here I am at ten: 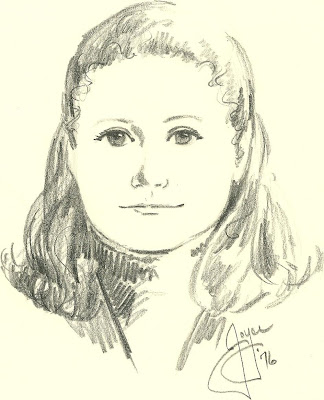 wow.. you _are_ a poet. and that just sent shivers down my spine, despite the summer day we're having here now..

here's to you! and all the happiness you deserve :)

(Btw, never watched that film, but have seen snippets - not impressed..) When will you come to see the real Norway? :)

I really would love to come to Norway. :) I have high hopes to make it there someday!!

And tusen takk for the nice words!

Very nice poem. And I'm glad that SOME of your holiday weekend was fun. Sorry about all the non-fun stuff.

Your soul is so wonderful.

It soars, unbroken, at forty-four.