I took a nasty fall yesterday. I had scheduled myself for an early morning eye doctor appointment in an attempt to be virtuous and not miss any work hours. The eye guy's office is just a few blocks from work, so I figured that, even with giant eyeballs, navigating the sidewalks of DC in the misty rain would be no problem.

And the sidewalk, indeed, proved to be no problem. Getting my appointment started, however, was. Doc was late due to an accident out on one of our heavily traveled commuter roads. Rain, like snow, is a signal to the drivers of the metropolitan DC area to drive in a fashion that can only be described as "batshit crazy."

"Honey, look! It's raining. START SWERVING! TURN OFF YOUR LIGHTS! TURN INDICATORS ARE FOR PUSSIES. READ MY MIND, MUTHAF*CKAS!"

I saw a bad accident on my way downtown, so I wasn't surprised by the doc's delay. However, his late arrival had a snowball effect. Doc late, appointments pushed back, eye dilation (of which I have many due to my mutant eyeballs) pushed back... end result: me, late to work.

Little Orphan Black Massive Pupils navigated the uneven sidewalk just fine, dumped damp coat in car, got into the lobby of National Geographic, and a frisky tourist child zipped in front of me and my cane, and BOOM, that was all that was needed to take me down like like a deer on Ted Nugent's ranch. BLAM. Left knee took the hit.

I was offered help, which I rejected. People are kind when you fall, especially if you have a cane and huge-ass sunglasses on that make you look like you're desperately trying to trade disability for a modicum of oversized glamour. Instead, I sat for a while in the corner of the hall by the stairs, while colleagues came by to see if I was okay. I was. Damn eyeballs. Damn speedy kids! GET OFF MY MARBLE LAWN!

It was sort of the diamond crown capper on this week.


Of course, it was only Thursday. 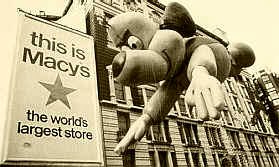 I believe poor Underdog has been retired. I'm not there yet, but I think my current handlers are about ready to let go of my guidewires. Here's hoping I don't take out any lamp posts or pedestrians when that happens, eh?

On the way home, I left the windows open on my car. With enough speed, the mist felt sharp on my arms, and it was a nice counterpoint to the dull grey fog that slowly rolled into my path. Large clumps of leaves fell and hit the pavement with audible thuds, reminding me that fall had arrived. So much has been going on in my mind that I needed a reminder. And I felt a deep sadness about that. I should be happy about sweaters and jack-o'-lanterns and the coming delicious wind and darkness.

I am an autumn baby. People's Exhibit One: me in fuzzy photos I scanned many moons ago when I had a much less deft hold on technology. Here I am, 364 days old. 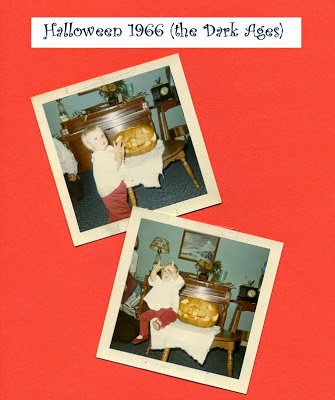 My new year was always the start of the school year, with notebooks, and pencils, and fresh pink erasers. I was born on November 1st, which, I realize, gives me a few weeks over old Underdog, who would appear with the turkey and cranberry sauce my first year on the planet.

I always feel better when I hear dry leaves blowing along the street. I'm happy when I see a plump pumpkin at the market, waiting for a family's cheerful blade to carve a grimace on its face and gut it with terrifyingly joyful imprecision. Like white lights in the snow on my balcony, I find coming home in autumn to candy corn twinkle lights framing orange balls filled with tea candle bellies and jagged smiles so wonderful. 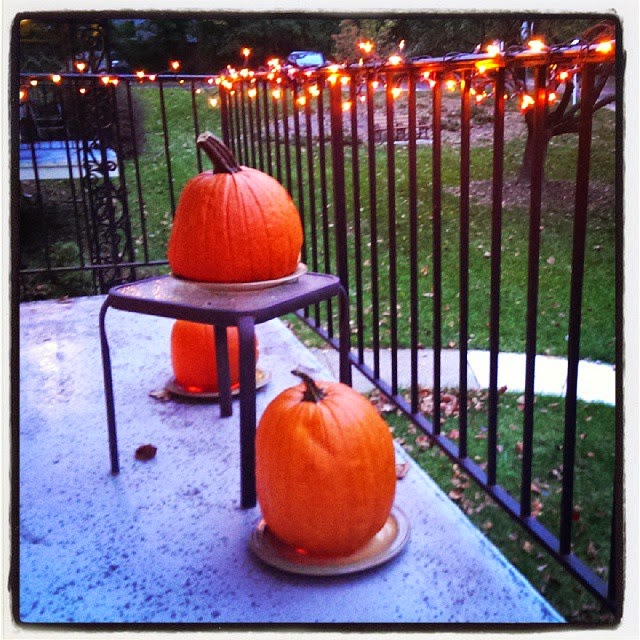 I was raised on Ray Bradbury and Stephen King, the Twilight Zone and Outer Limits. Flashlights and fire circles are my emblems, and the quickening of my heart about what might brush past me in the cooling night makes me feel more alive. (Of course, anything that might snag your heel can be countered by the power of a blanket tucked tightly around your feet.) My imagination was fed by the nightmare carnivals in the books I read. By the dark, kohl-eyed evil of blood-flushed, flesh-hungry, shadow-dwelling autumn people—always clutching at the life light and the very breath of vibrant, earnest, bookish children. I loved that the forces of evil were so often conquered by the strength and unspoken love of sturdy, resolute Midwestern and New England families. So often, there seemed to be an absent or distant father who would finally rally to the brave children in peril and vanquish the autumnal forces of supernatural evil.

I always wanted one of those fathers. I mean, I had the absent, distant one. I wanted the one who rallied to my side. But real life is tougher than fiction, and I would have to slay the monsters of my childhood autumns myself.

Some of my friends like to tell me that my father's lack of interest in my existence has made me a more resilient person. I'm not sure about that. I do know I need to keep slaying my monsters and sending my ghosts to sleep on my own. This autumn, the monsters are bigger. They take different forms than they did when I was a kid, and they are much more real. I feel their shadows over me when the alarm goes off in the morning. Funny that they are roused by the daylight. And some days, they are hard to shake. 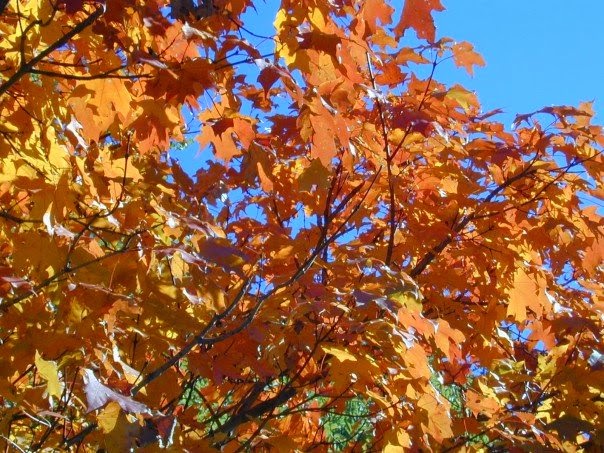 The monsters of your adult life have smiles and authority, handshakes and back pats, agendas and titles. And frankly, they're much more terrifying than anything that crawled out of my books or my imagination back in Illinois.

But autumn is mine. They cannot take that from me. They cannot declare any victory over me. I am a child of the fall, a warrior of autumn. And I will chase the shadow people back to their dark corners and win a flame-leaved crown. I claim this season for myself. You should claim it, too.

Carve a pumpkin and light it up, make a crock of chili, wrap up in a blanket on your steps and watch the constellations form in the rising night, like a benediction from the heavens. Capture it your heart and mind like a firefly in your hands. 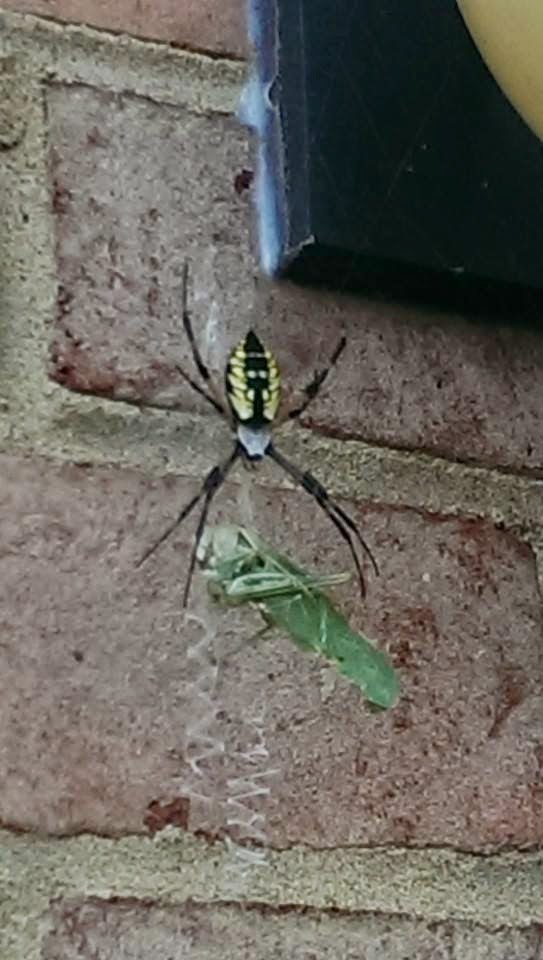 Right now, I have a huge spider living on my balcony. Friends have identified her as a Argiope aurantia, or the North American Yellow Garden Spider. She arrived in a stealthy fashion, and quickly took over a large piece of brick wall, on which she has been making quick work of sizable prey. From reading the Wiki on these critters, I have learned they can eat small vertebrates. Small vertebrates. (Holy crap—lizards?!?) Makes me glad I am a very large vertebrate because I don't think she would give me any quarter were I to get caught in her orb woven web.

But, while I initially had a mental meltdown upon discovering her (by reaching up behind my head and putting my hand directly into the damn web and on a dead bug wrapped up like a little burrito), I've come to appreciate that she is grabbing her own piece of autumn, and she will do me no harm. (Wikipedia says her venom is "seemingly" harmless to humans. Seemingly.)

I understand that she will die with the first frost, but until then, she is the queen of that section of real estate. I respect that.

I named the spider "Bella" as she is mostly black and yella. And tonight, in the cool air of this early autumn night, I will join her on the balcony. She will have... well, whatever the hell is caught in that web now, and I will have an Irish coffee and prop up my battered giant knee on an old ottoman. Bloodied, but not beaten. Still alive, both of us ladies on the balcony.

Be Bella. Albeit a Bella with a much heartier constitution and a much, much longer lifespan.

Stake your claim. Slay your monsters. Leave your mark. I will not let my monsters ruin my season of joy.

Hello, autumn. Your child is home, and she will survive.
Posted by Merujo at 7:57 PM

Sorry to hear about the spill - hope you're getting better

Like you, I love the Autumn - the smell, sights and sounds are great and its my favourite time of the year. Even towards the end as the leaves get soggy and damp its just a carpet ready for snow and a return of nutrients back for next year - not an end but just the beginning :-)

Thanks, Andrew. I love that it finally feels and smells and sounds like autumn here (all those lovely leaves blowing outside my door right now). I'm going to string my little lights out on the balcony today. Won't turn 'em on yet, but when the pumpkins go out, they'll go on. :)