I know I haven't done much with the blog recently. There are many reasons for this, but they all just sound like excuses right now.

Except for this one.

I have pneumonia, and it's kicking my ass from here to next Sunday. I got sick after helping to clear out part of my late sister Mary's living room in New Jersey. She was a lifelong smoker, and in her later years, she was too unwell and fragile to do any housecleaning.

Think of Miss Havisham's house in Great Expectations. A home filled with a lifetime of sentimental treasures and memories, but thick with dust and disuse and neglect. Add nicotine everywhere, and that's how my sister was living.

I left Mary's house sick back in December, and I've probably had a low-level, nasty-ass respiratory infection ever since then. I spent the new year on antibiotics, but I likely never shook this sucker. January and February have been very busy months, and January saw me shivering at the bus stop in our most bitter cold weather, waiting for the shame train to the Metro many mornings before the sun came up. Considering my current wussy constitution, I have to marvel at the fact that I used to relish Muscovite winters and brag about walking to the streetcar stop through knee-deep drifts. Ah, youth! (And stupidity!) Now, I shiver and shake at weather I would have shrugged at back in the day. And my sister's failed lungs - smoker or not - serves as a cautionary tale for me in middle age as my father's daughter. Just another Jordan kid with breathing problems and a defective immune system.

One of the causes of my sister's death - per the autopsy - was complications of COPD. That's chronic obstructive pulmonary disease to you and me. And considering my sister's smoking and the decades of bad air in the house, that, very sadly is not a surprise. It's not a surprise, too, that my sister, the Social Worker, and I both became sick with really vicious respiratory infections after helping just a little with house clean-out.

I should have been mainlining my time-release Vitamin C from the moment I got home from Jersey, but I forgot. Seriously, in January, I'm amazed I remembered my name most days. And by the time I got on the plane headed for Reno in early February, I was burnt out.

Don't get me wrong - I had a great trip with my brother, Air Jordan, and my sister, Nurse Rachet. We headed out west to attend an event honoring our maternal grandfather, a man whose pioneering research, mapping, and exploration is still used by hydrologists and environmentalists in Nevada today. We also road-tripped from Reno, up through the mountains of Nevada and California to Oregon, where we donated some of our mom's WWII aviation memorabilia to the Oregon State Aviation Historical Society.

I have hundreds of photos and great stories to tell, but that will have to wait a little while.

Right now, my goal is just getting well. I got back from the West Coast feeling massively under the weather, and I've been sick now since the 9th of this month. What started as an irritating cough and cold has turned into pneumonia, and I've been - with only brief trips outside - trapped in my apartment for more than a week at this point. I've passed out a couple of times, had high fevers, slept for whole days at a time, even hallucinated one morning... all this with coughing fits that make my ribs creak and a voice that makes me sound like a pack-a-day Marlboro girl. I'm so dehydrated all the time, my lips look like I've been baking in the Sahara for a week.

I had to go out and get a vaporizer to help me breathe at night, and I'm supposed to get LOTS of sleep and avoid contact with peeps who have even a little bit of a cold because I'm incredibly susceptible to secondary infections right now. Ugh!

I staggered into the office today, only to be sent home by our department VP who looked at me like I had a third eye for coming in at all. I believe her words were, "Good god, Melissa! Why are you here?!?!"

I admit, I look like crap (along with sounding like crap.) The dark circles under my eyes have their own dark circles orbiting around my peepers. I can't remember if I even brushed my hair before I came in, and, I'm embarrassed to say, I just pulled a fleece jacket on as a shirt this morning.

So, long story short, I'm working from home for the next few days, trying to keep on top of work that keeps piling up. (And taking cat naps when I can.)

Here's hoping you'll hear from me again soon. I need to get my lungs happy before I really want to sit for long at the keyboard.

Be well, and I'll be back as soon as possible!

And just to prove I actually got my ass out of DC this month: 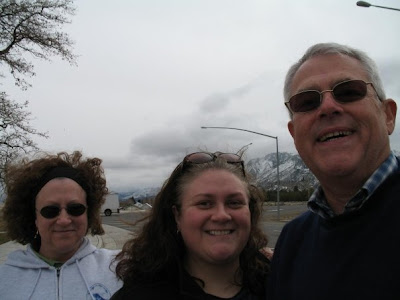 Nurse Rachet, me, and Air Jordan,
somewhere in the windy, windy Sierra Nevadas...
Posted by Merujo at 10:15 PM

COPD is nasty stuff. My father passed away from it. I hope you get over your bout soon! And no more imitating MM after you're better.

That looks beautiful:) Glad for your visit w/ your siblings. Just.

Albeit, oh my yes, COPD is horrible stuff, and the effects of her condition combined w/ the, um, "stale" house...... I am not at all surprised to hear that you and your sister got ill from this, too. I'm sorry to hear how your sister lived, while understanding it. When my father, with emphysema, told me he was going to start smoking again b/c what the heck, and I had to tell him, sorry, that means I cannot visit you.... b/c I couldn't, physically, if he smoked. Well, he needed me b/c otherwise his home would be like your sisters.

I'm thankful you can work at home (does this mean you won't be short of sick time and be at risk for no pay???), and yes, being "under the weather," when waiting at bus stops in frigidness and wind...... it no longer makes you stronger. You need to get well, and have a faery bestow a good working vehicle your way, too. May you kick this thing good and well, w/out hospital intervention required.

Be well, my friend.

We must definitely get together. And soon! I'm moving to Washington State in April.

Know anyone who wants to rent my house?

Sending healthy vibes your way. Let me know if there's anything I can do for you--like fetch soup or OJ or Kleenex. Whatever. Say the word and I'll run up to your tony end of town!

By 'eck pneumonia ! You have my sympathy, having had that nasty disease twice in the past five years. I had always thought that as I didn't heat up soup over a candle whilst wearing fingerless gloves and wearing an old cardigan that I would never ever get pneumonia.How wrong was I ?! Here's hoping you get well soon

Ugh, pneumonia is not good. I hope that you feel better soon.

Hoping things have improved for you at least a little during the week. I drank a Diet Coke Plus in your honor today (not Zero -- can't take that risk..)

The power of caffeine-fueled good-vibes-sent-your-way aside...please take care of yourself when you start to feel better -- ease back into things as much as you can. Something like this is very easy to relapse Don't worry about the blog, or anything else other than your recovery.